Will Urban Sprawl KO the Koala? 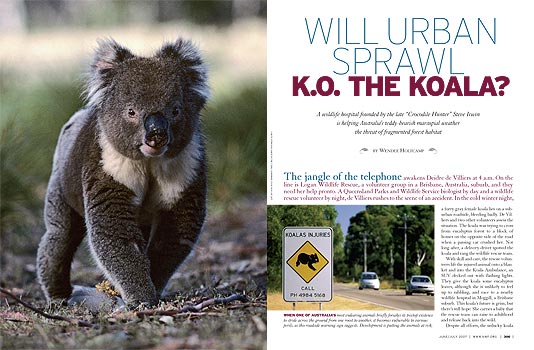 THE JANGLE of the telephone awakens Deidre de Villiers at 4 a.m. On the line is Logan Wildlife Rescue, a volunteer group in a Brisbane, Australia, suburb, and they need her help pronto. A Queensland Parks and Wildlife Service biologist by day and a wildlife rescue volunteer by night, de Villiers rushes to the scene of an accident. In the cold winter night, a furry gray female koala lies on a suburban roadside, bleeding badly. De Villiers and two other volunteers assess the situation. The koala was trying to cross from eucalyptus forest to a block of homes on the opposite side of the road when a passing car crushed her. Not long after, a delivery driver spotted the koala and rang the wildlife rescue team.

With skill and care, the rescue volunteers lift the injured animal onto a blanket and into the Koala Ambulance, an SUV decked out with flashing lights. They give the koala some eucalyptus leaves, although she is unlikely to feel up to nibbling, and race to a nearby wildlife hospital in Moggill, a Brisbane suburb. This koala's future is grim, but there's still hope: She carries a baby that the rescue team can raise to adulthood and release back into the wild.

Despite all efforts, the unlucky koala mother dies. At the hospital, the vets transfer her 1-pound baby, called a joey, into a fuzzy artificial pouch. De Villiers names him Reme and becomes mom. She takes him home, bottle-feeds him every few hours and comforts him. Over the months, he will graduate from his pouch to "koala kindergarten," a gum tree jungle gym. After maturing there, Reme will take his place in the wild, facing the same dangers his mother did. 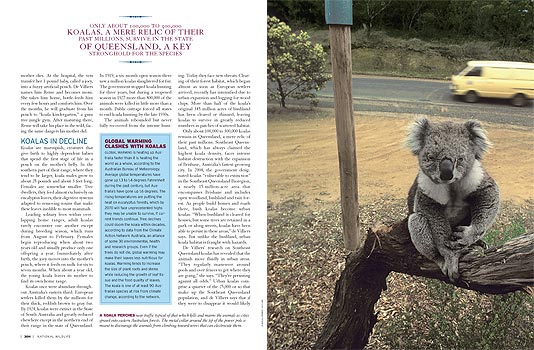 Koalas in Decline
Koalas are marsupials, creatures that give birth to highly dependent babies that spend the first stage of life in a pouch on the mother's belly. In the southern part of their range, where they tend to be larger, koala males grow to about 25 pounds and about 3 feet long. Females are somewhat smaller. Tree dwellers, they feed almost exclusively on eucalyptus leaves, their digestive systems adapted to removing toxins that make these leaves inedible to most mammals.

Leading solitary lives within overlapping home ranges, adult koalas rarely encounter one another except during breeding season, which runs from August to February. Females begin reproducing when about two years old and usually produce only one offspring a year. Immediately after birth, the joey moves into the mother's pouch, where it feeds on milk for six to seven months. When about a year old, the young koala leaves its mother to find its own home range.

Koalas once were abundant throughout Australia's eastern third. European settlers killed them by the millions for their thick, reddish brown to gray fur. By 1924, koalas were extinct in the State of South Australia and greatly reduced elsewhere except in the northern end of their range in the state of Queensland. In 1919, a six-month open season there saw a million koalas slaughtered for fur. The government stopped koala hunting for three years, but during a reopened season in 1927 more than 800,000 of the animals were killed in little more than a month. Public outrage forced all states to end koala hunting by the late 1930s.

The animals rebounded but never fully recovered from the intense hunting. Today they face new threats. Clearing of their forest habitat, which began almost as soon as European settlers arrived, recently has intensified due to urban expansion and logging for wood chips. More than half of the koala's original 345 million acres of bushland has been cleared or thinned, leaving koalas to survive in greatly reduced numbers in patches of scattered habitat.

Only about 100,000 to 300,000 koalas remain in Queensland, a mere relic of their past millions. Southeast Queensland, which has always claimed the highest koala density, faces intense habitat destruction with the expansion of Brisbane, Australia's fastest-growing city. In 2004, the government designated koalas "vulnerable to extinction" in the Southeast Queensland Bioregion, a nearly 15-million-acre area that encompasses Brisbane and includes open woodland, bushland and rain forest. As people build homes and roads there, bush koalas become urban koalas. "When bushland is cleared for houses, but some trees are retained in a park or along streets, koalas have been able to persist in these areas," de Villiers says. But unlike the bushland, urban koala habitat is fraught with hazards. 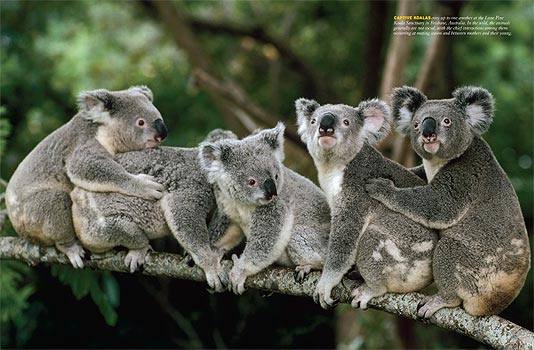 De Villiers' research on Southeast Queensland koalas has revealed that the animals move fluidly in urban areas. "They regularly maneuver around pools and over fences to get where they are going," she says. "They're persisting against all odds." Urban koalas comprise a quarter of the 25,000 or so that make up the Southeast Queensland population, and de Villiers says that if they were to disappear it would likely have a substantial impact on the species.

Urban koalas become particularly vulnerable to dogs and cars when moving on the ground between trees and during mating season, when males disperse over many miles. Wildlife rescue teams, like the one de Villiers works with, stay particularly busy during breeding season, when wildlife hospitals see triple the number of koalas. Unfortunately, injured koalas face bleak prospects. "The statistics are the same for dog attacks and cars," says de Villiers. "Around 80 percent die."

Caring for Koalas
Outside the Australian Wildlife Hospital in Beerwah, north of Brisbane, Senior Veterinarian Jon Hanger sits at a picnic table explaining the koala's plight and the hospital's broader mission as part of the Australia Zoo, owned by the family of the late Steve "Crocodile Hunter" Irwin. The hospital was a dream of Irwin's mother, Lyn, who died in a car accident in 2000. Her passion for rehabilitating orphaned wildlife inspired the Croc Hunter's own infectious enthusiasm, and he dedicated the hospital to her.

Soft spoken but passionate about his work, Hanger has overseen the hospital's development since its inception in 2003, performing surgery, researching disease treatments and fighting conservation battles.

Walking hospital grounds, he shows the dozen enclosures that house koalas in different stages of recovery. Each koala sits in the crook of a eucalyptus limb, chock full of fresh leaves. Joe, hit by a car, has a shaven and stitched leg. There are Bubbles, Billie, Ali—some victims of dog attacks, some of disease. Since 2004, the hospital has treated more than 6,000 animals, from frogs to emus to wallabies. Most are koalas. 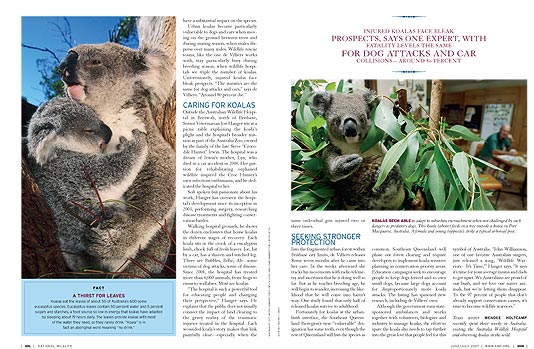 "The hospital is such a powerful tool for educating people and changing their perspective," Hanger says. He explains that the public does not usually connect the impact of land clearing to the gritty reality of the traumatic injuries treated in the hospital. Each wounded koala's story makes that link painfully clear—especially when the same individual gets injured two or three times.

Seeking Stronger Protection
Into the fragmented urban forest within Brisbane city limits, de Villiers releases Reme seven months after he came into her care. In the weeks afterward she tracks his movements with radio telemetry and ascertains that he is doing well so far. But as he reaches breeding age, he will begin to wander, increasing the likelihood that he will come into harm's way. One study found that only half of released koalas survive to adulthood. Fortunately for koalas at the urban-bush interface, the Southeast Queensland Bioregion's new "vulnerable" designation has some teeth, even though the rest of Queensland still lists the species as common. Southeast Queensland will phase out forest clearing and require developers to implement koala-sensitive planning in conservation priority areas. Education campaigns seek to encourage people to keep dogs fenced and to own small dogs, because large dogs account for disproportionately more koala attacks. The listing has spawned new research, including de Villiers' own.

Although the government runs state-sponsored ambulances and works together with volunteers, biologists and industry to manage koalas, the effort to spare the koala also needs to tap further into the great love that people feel for this symbol of Australia. "John Williamson, one of our favorite Australian singers, just released a song, 'Wildlife Warriors—It's Time,'" Hanger says. "It says it's time for your average mums and dads to get upset. We Australians are proud of our bush, and we love our native animals, but we're letting them disappear. To the 97 percent of people that don't already support conservation causes, it's time to become wildlife warriors."

Global warming is heating up Australia faster than it is heating the world as a whole, according to the Australian Bureau of Meteorology. Average global temperatures have gone up 1.3 to 1.4 degrees Fahrenheit during the past century, but Australia's have gone up 1.6 degrees. The rising temperatures are putting the heat on eucalyptus forests, which by 2070 will face unprecedented highs they may be unable to survive, if current trends continue. Tree declines could doom the koala within decades, according to data from the Climate Action Network Australia, an alliance of some 30 environmental, health and research groups. Even if the trees do not die, global warming may make their leaves less nutritious for koalas. Warming tends to increase the size of plant roots and stems while reducing the growth of leaf tissue and the food quality of leaves. The koala is one of at least 90 Australian species at risk from climate change, according to the network.