The spotted hyena may look like a dog, but scientists are discovering that its social life is more like a baboon's, though with a feminist emphasis 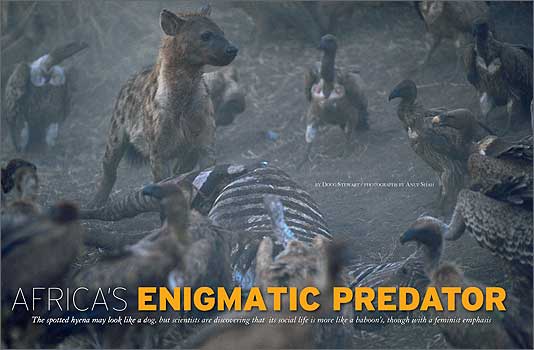 HYENAS HAVE NEVER been admired as noble beasts, the way lions are. Sir Walter Raleigh, in his 1614 History of the World, wrote that Noah kept hyenas off the ark. They didn't need berths anyway, Raleigh explained, because they could be regenerated after the flood by crossing dogs with cats.

Disparaged for centuries, hyenas are actually, according to a small band of experts, admirable indeed. Hyena biologists say the animals are more intelligent, more socially adept, better at hunting and less violent than their reputation suggests. They're not even all that ugly, once you get used to them, says zoologist Kay Holekamp of Michigan State University, who has studied hyenas in Kenya for more than 15 years. "They definitely have bad-hair days, like all of us," she says, "but I find a lot of them quite beautiful."

A top predator of the African savanna, the spotted hyena is one of four living members of the hyena family. The other three, all smaller, are the striped hyena, the brown hyena and the termite-eating aardwolf. Spotted hyenas look a bit like very large, unkempt dogs with coarse patchy fur and massive necks, though genetically they're unrelated to dogs (or cats). Weasels and mongooses are closer, if still distant, kin. An adult hyena can weigh as much as a Great Dane, well over 150 pounds. 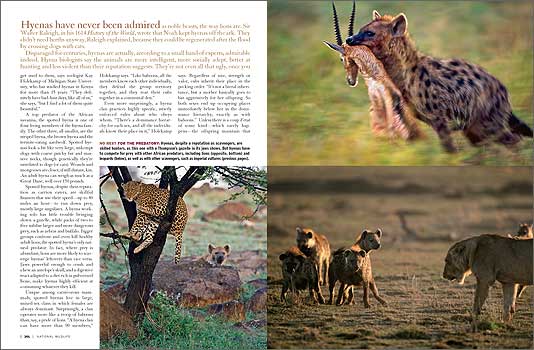 Spotted hyenas, despite their reputation as carrion eaters, are skillful hunters that use their speed--up to 40 miles an hour--to run down prey, mostly large ungulates. A hyena working solo has little trouble bringing down a gazelle, while packs of two to five subdue larger and more dangerous prey, such as zebras and buffalo. Bigger groups confront and even kill healthy adult lions, the spotted hyena's only natural predator. In fact, where prey is abundant, lions are more likely to scavenge hyenas' leftovers than vice versa. Jaws powerful enough to crush and chew an antelope's skull, and a digestive tract adapted to a diet rich in pulverized bone, make hyenas highly efficient at consuming whatever they kill.

Unique among carnivorous mammals, spotted hyenas live in large, mixed-sex clans in which females are always dominant. Surprisingly, a clan operates more like a troop of baboons than, say, a pride of lions. "A hyena clan can have more than 90 members," Holekamp says. "Like baboons, all the members know each other individually, they defend the group territory together, and they rear their cubs together in a communal den." 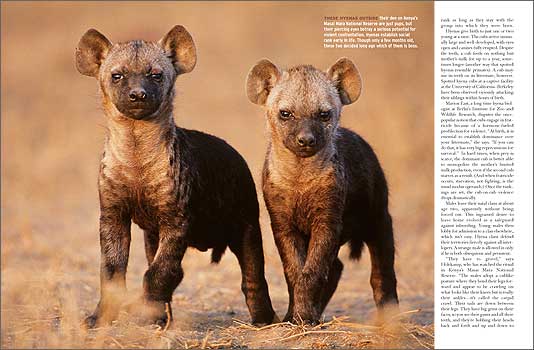 Even more surprisingly, a hyena clan practices highly specific, strictly enforced rules about who obeys whom. "There's a dominance hierarchy for each sex, and all the individuals know their place in it," Holekamp says. Regardless of size, strength or valor, cubs inherit their place in the pecking order. "It's not a literal inheritance, but a mother basically goes to bat aggressively for her offspring. So both sexes end up occupying places immediately below her in the dominance hierarchy, exactly as with baboons." Unless there is a coup d'etat of some kind--which rarely happens--the offspring maintain that rank as long as they stay with the group into which they were born.

Hyenas give birth to just one or two young at a time. The cubs arrive unusually large and well-developed, with eyes open and canines fully erupted. Despite the teeth, a cub feeds on nothing but mother's milk for up to a year, sometimes longer (another way that spotted hyenas resemble primates). A cub may use its teeth on its littermate, however. Spotted hyena cubs at a captive facility at the University of California–Berkeley have been observed viciously attacking their siblings within hours of birth.

Marion East, a long-time hyena biologist at Berlin's Institute for Zoo and Wildlife Research, disputes the once-popular notion that cubs engage in fratricide because of a hormone-fueled predilection for violence. "At birth, it is essential to establish dominance over your littermate," she says. "If you can do that, it has very big repercussions for survival." In hard times, when prey is scarce, the dominant cub is better able to monopolize the mother's limited milk production, even if the second cub starves as a result. (And when fratricide occurs, starvation, not fighting, is the usual modus operandi.) Once the rankings are set, the cub-on-cub violence drops dramatically.

Males leave their natal clans at about age two, apparently without being forced out. This ingrained desire to leave home evolved as a safeguard against inbreeding. Young males then lobby for admission to a clan elsewhere, which isn't easy. Hyena clans defend their territories fiercely against all interlopers. A strange male is allowed in only if he is both obsequious and persistent. 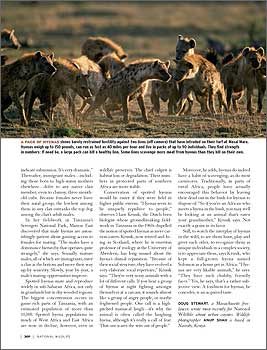 "They have to grovel," says Holekamp, who has watched the ritual in Kenya's Masai Mara National Reserve. "The males adopt a cublike posture where they bend their legs forward and appear to be crawling on what looks like their knees but is really their ankles--it's called the carpal crawl. Their tails are down between their legs. They have big grins on their faces, so you see their gums and all their teeth, and they're bobbing their heads back and forth and up and down to indicate submission. It's very dramatic." Thereafter, immigrant males--including those born to high-status mothers elsewhere--defer to any native clan member, even to clumsy, three-month-old cubs. Because females never leave their natal group, the lowliest among them in any clan outranks the top dog among the clan's adult males.

In her fieldwork in Tanzania's Serengeti National Park, Marion East discovered that male hyenas are astonishingly patient about gaining access to females for mating. "The males have a dominance hierarchy that operates quite strangely," she says. Sexually mature males, all of which are immigrants, enter a clan at the bottom and move their way up by seniority. Slowly, year by year, a male's mating opportunities improve.

Spotted hyenas mate and reproduce widely in sub-Saharan Africa, not only in grasslands but in dry wooded regions. The biggest concentration occurs in game-rich parts of Tanzania, with an estimated population of more than 10,000. Spotted hyena populations in much of West Africa and East Africa are now in decline, however, even in wildlife preserves. The chief culprit is habitat loss or degradation. Their numbers in protected parts of southern Africa are more stable.

Conservation of spotted hyenas would be easier if they were held in higher public esteem. "Hyenas seem to be uniquely repulsive to people," observes Hans Kruuk, the Dutch-born biologist whose groundbreaking fieldwork in Tanzania in the 1960s dispelled the notion of spotted hyenas as mere carrion-eaters. Kruuk, now retired and living in Scotland, where he is emeritus professor of zoology at the University of Aberdeen, has long mused about the hyena's dismal reputation. "Because of their social structure, they have evolved a very elaborate vocal repertoire," Kruuk says. "They're very noisy animals with a lot of different calls. If you hear a group of hyenas at night fighting amongst themselves at a carcass, it sounds almost like a group of angry people, or maybe frightened people. One call is a high-pitched maniacal laugh--it's why the animal is often called the laughing hyena, although it's really a call of fear. That one scares the wits out of people."

Moreover, he adds, hyenas do indeed have a habit of scavenging, as do most carnivores. Traditionally, in parts of rural Africa, people have actually encouraged this behavior by leaving their dead out in the bush for hyenas to dispose of. "So if you're an African who meets a hyena in the bush, you may well be looking at an animal that's eaten your grandmother," Kruuk says. Not exactly a point in its favor.

Still, to watch the interplay of hyenas in the wild, to see them hunt, play and greet each other, to recognize them as unique individuals in a complex society, is to appreciate them, says Kruuk, who kept a full-grown hyena named Solomon as a house pet in Africa. "Hyenas are very likable animals," he says. "They have such chubby, friendly faces." Yes, he says, that's a rather subjective view. A fondness for hyenas, he concedes, is an acquired taste.