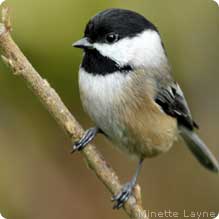 IF YOU LIVE in the northern half of the country, the odds are good that a black-capped chickadee will visit your property this winter. The most widespread of North America’s seven species of chickadees, it also is one of the most commonly seen backyard birds, particularly during the cold months when most other featured creatures have flown south.

For years, scientists have been intrigued by the ability of these tiny imps to survive—and thrive—during even the most frigid days. As a result, today biologists have a clear understanding of many of the species’ survival techniques, which likely are employed by the other members of the chickadee clan.

“Black-capped chickadees have a wonderful assortment of adaptations for the winter,” says biologist Susan M. Smith, who has studied the birds’ biology and behavior for more than a quarter century at Cornell University and Mount Holyoke College. “Carefully hidden food items, dense winter coats, specially selected winter roost cavities and, perhaps most remarkable of all, the ability to go into nightly hypothermia, thus conserving large amounts of energy, greatly increase the chances of survival.”

“Chickadees are not the suburban wimps that some people think they are,” says wildlife ecologist Margaret Clark Brittingham. For three winters in Wisconsin in the 1980s, Brittingham kept track of 576 black-capped chickadees. Her research at the University of Wisconsin showed that during milder winter weather, chickadees that had been exposed to feeders as a supplemental food source apparently did not become dependent on the feeder food. They survived at the same rate when the feeder food was removed as did chickadees that subsisted solely on insect eggs and wild seeds and had never been exposed to feeder food.

However, Brittingham’s research did find that during harsh weather (below 10 degrees F), black-capped chickadees benefited from supplemental food they obtained at feeders. The survival rate of her subjects, compared to those birds that obtained less-accessible food from the wild during severe winters, nearly doubled when they consumed sunflower seeds at feeders. “The thing that really impressed me about chickadees,” she says, “is their metabolism. We weighed birds early in the morning and found that they had virtually no body fat. Yet the same birds examined in the afternoon of the same day were bulging with fat.”

Though biologists uncovered many of the chickadee’s survival secrets, no one had focused on where the birds performed these amazing acts of energy conservation at night—that is, until University of Alaska–Fairbanks biologist Susan Sharbaugh began to track them down seven years ago.

Sharbaugh spent several winter nights trying to find out how a creature as light as a handful of paper clips survives nighttime temperatures of 40 below zero F. She confirmed earlier studies when she found that during the darkest days of Alaska’s winter, black-capped chickadees have to stuff themselves with enough seeds and frozen insects to survive 18-hour nights. Her research showed that the birds gain an additional 10 percent or more of their body weight each day. (Another study found that chickadees consume 60 percent of their body weight each day.) They then went into hypothermia to reduce their metabolism and used up excess body fat to shiver all night to keep warm. The human equivalent of this overnight phenomenon would be a 165-pound man spending a frigid night outside and emerging 15 or so pounds lighter in the morning.

To learn where the birds spent winter nights in Alaska, Sharbaugh attached radio transmitters weighing less than .5 grams to some chickadees. Then by following the beeping signals after dark, she was led to a birch tree with a broken top. She returned the following day at twilight and watched a chickadee dive into a tree hole the size of a quarter.

Sharbaugh found several more of the birds’ roosts that year—all in birches, suggesting that the trees provided better roosting conditions than other tree species in the region. “For chickadees, finding a roost is just as critical, if not more critical, than finding food,” she says. “Birds that small have to find a good insulated place to spend the night.”

Field Editor George H. Harrison is the author of more than a dozen books on birds and backyard creatures. To learn more about attracting wildlife to your property, visit www.nwf.org/gardenforwildlife.

Chickadees are among the easiest birds to lure into your yard, especially during winter. Here are a few tips to help attract them:

Related Links
National Wildlife Federation strives to promote solutions to climate change impacts on people and wildlife here in the United States and around the world.