From snakes and frogs to giant squirrels, this Southeast Asian island is home to a greater variety of flying animals than any other place on Earth 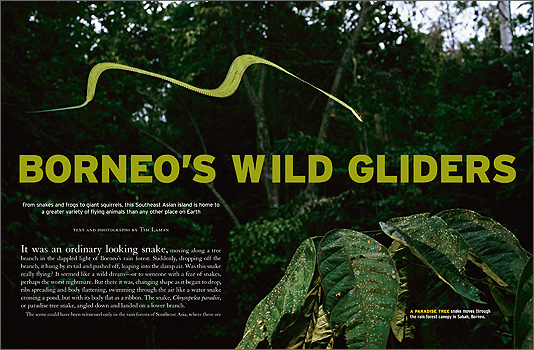 IT WAS AN ORDINARY looking snake, moving along a tree branch in the dappled light of Borneo’s rain forest. Suddenly, dropping off the branch, it hung by its tail and pushed off, leaping into the damp air. Was this snake really flying? It seemed like a wild dream—or to someone with a fear of snakes, perhaps the worst nightmare. But there it was, changing shape as it began to drop, ribs spreading and body flattening, swimming through the air like a water snake crossing a pond, but with its body flat as a ribbon. The snake, Chrysopelea paradise, or paradise tree snake, angled down and landed on a lower branch.

The scene could have been witnessed only in the rain forests of Southeast Asia, where there are several kinds of flying snakes. And snakes are just the first on a list of curious creatures that take to the air to get from tree to tree. More than 60 gliding species inhabit the region’s forests, 33 of them on Borneo alone. In addition to snakes, the island is home to flying lemurs, lizards, squirrels, geckos and frogs.

Though they’re called “flying,” these animals cannot really fly like birds or bats that propel themselves through the air. Yet they do much more than simply parachute out of a tree and plop to the ground. The animals travel like hang gliders, subtly shifting body weight or adjusting tails and limbs to steer a controlled flight path through the canopy labyrinth. And all have body structures that increase surface area, making them better airfoils.

No other tropical region on Earth comes close to having Southeast Asia’s diversity of gliders. The Amazon has none, Central America two, and Africa harbors just a handful. Such a striking difference begs for an explanation, especially because the ability to glide has evolved independently at least six different times in the region, once for each kind of creature that possesses the trait. There must be something special about these forests, but what could it be?

Scientists have proposed various theories to solve the mystery. The first, called the tall-trees hypothesis, suggests that multiple gliding animals evolved because the region’s tree canopy is higher on average than it is in South America or Africa. Yet while higher launching points seem to offer gliders an advantage, gliding species are found throughout Southeast Asia, even in areas with relatively short forest. And gliders often take off from the middle of tree trunks, with some specializing in lower levels of the forest.

A second theory, based on forest surveys of woody vines called lianas, suggests that Southeast Asia has fewer connections among trees than other tropical regions. But a closer look reveals that the abundance of lianas, in Asian as well as in African and South American forests, varies greatly from place to place depending on local conditions.

My own studies of Borneo’s forests have led me to come up with another hypothesis: It’s all about food. The island’s forests are unique in one important way. They are dominated by giant trees in the dipterocarp family, which fruit rarely and provide little food. The lack of fruit ripples throughout food chains, reducing the abundance of insects, for example. For this reason, animals on Borneo must range more widely to find food than do species in other rain forests—and gliding is an ideal way to travel from tree to tree without having to make long, potentially risky trips to the ground. The need for safe, efficient canopy travel would explain why gliding has evolved in the remarkable diversity of animal groups featured on these pages—from flying lemurs sporting “skin wings” to frogs with exaggerated webbed feet to snakes that can flatten their entire bodies to fly.

Tim Laman is a wildlife photographer and field biologist based at Harvard University who has studied and photographed rain forest plants and animals on Borneo and elsewhere in Southeast Asia for more than 20 years. 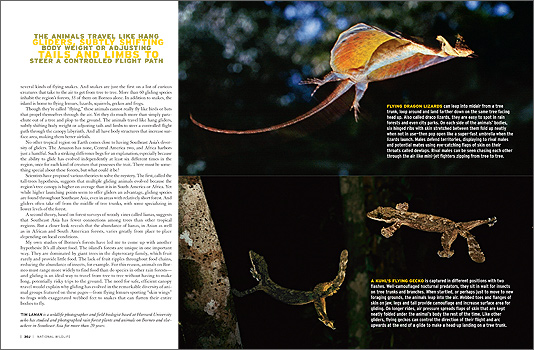 FLYING DRAGON LIZARDS (Above photo, top) can leap into midair from a tree trunk, loop around and land farther down on the same tree facing head up. Also called draco lizards, they are easy to spot in rain forests and even city parks. On each side of the animals’ bodies, six hinged ribs with skin stretched between them fold up neatly when not in use—then pop open like a super-fast umbrella when the lizards launch. Males defend territories, displaying to rival males and potential mates using eye-catching flaps of skin on their throats called dewlaps. Rival males can be seen chasing each other through the air like mini-jet fighters zipping from tree to tree.

A KUHL’S FLYING GECKO is captured in different positions with two flashes (Above photo, bottom). Well-camouflaged nocturnal predators, they sit in wait for insects on tree trunks and branches. When startled, or perhaps just to move to new foraging grounds, the animals leap into the air. Webbed toes and flanges of skin on jaw, legs and tail provide camouflage and increase surface area for gliding. On longer rides, air pressure spreads flaps of skin that are kept neatly folded under the animal’s body the rest of the time. Like other gliders, flying geckos can control the direction of their flight and arc upwards at the end of a glide to make a head-up landing on a tree trunk. 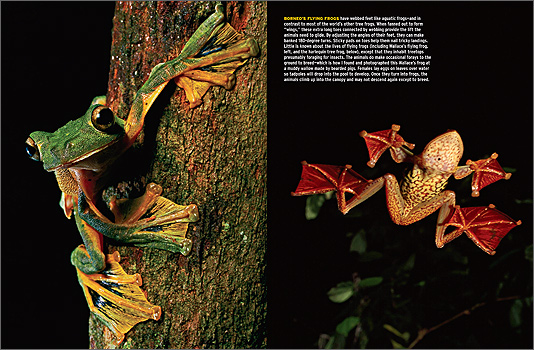 BORNEO’S FLYING FROGS have webbed feet like aquatic frogs—and in contrast to most of the world’s other tree frogs. When fanned out to form “wings,” these extra long toes connected by webbing provide the lift the animals need to glide. By adjusting the angles of their feet, they can make banked 180-degree turns. Sticky pads on toes help them nail tricky landings. Little is known about the lives of flying frogs (Above photo, including Wallace’s flying frog, left, and the harlequin tree frog, right), except that they inhabit treetops presumably foraging for insects. The animals do make occasional forays to the ground to breed—which is how I found and photographed this Wallace’s frog at a muddy wallow made by bearded pigs. Females lay eggs on leaves over water so tadpoles will drop into the pool to develop. Once they turn into frogs, the animals climb up into the canopy and may not descend again except to breed. 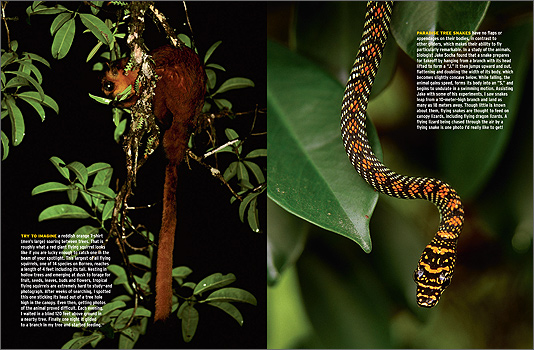 TRY TO IMAGINE a reddish orange T-shirt (men’s large) soaring between trees. That is roughly what a red giant flying squirrel (Above photo, left) looks like if you are lucky enough to catch one in the beam of your spotlight. This largest of all flying squirrels, one of 14 species on Borneo, reaches a length of 4 feet including its tail. Nesting in hollow trees and emerging at dusk to forage for fruit, seeds, leaves, buds and flowers, tropical flying squirrels are extremely hard to study—and photograph. After weeks of searching, I spotted this one sticking its head out of a tree hole high in the canopy. Even then, getting photos of the animal proved difficult. Each evening, I waited in a blind 120 feet above ground in a nearby tree. Finally one night it glided to a branch in my tree and started feeding.

PARADISE TREE SNAKES (Above photo, right) have no flaps or appendages on their bodies, in contrast to other gliders, which makes their ability to fly particularly remarkable. In a study of the animals, biologist Jake Socha found that a snake prepares for takeoff by hanging from a branch with its head lifted to form a “J.” It then jumps upward and out, flattening and doubling the width of its body, which becomes slightly concave below. While falling, the animal gains speed, forms its body into an “S,” and begins to undulate in a swimming motion. Assisting Jake with some of his experiments, I saw snakes leap from a 10-meter-high branch and land as many as 18 meters away. Though little is known about them, flying snakes are thought to feed on canopy lizards, including flying dragon lizards. A flying lizard being chased through the air by a flying snake is one photo I’d really like to get! 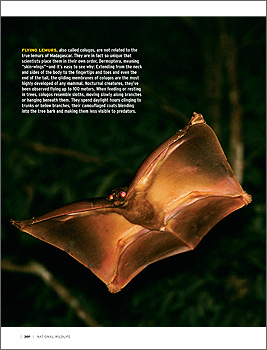 FLYING LEMURS, (Above photo) also called colugos, are not related to the true lemurs of Madagascar. They are in fact so unique that scientists place them in their own order, Dermoptera, meaning “skin-wings”—and it’s easy to see why: Extending from the neck and sides of the body to the fingertips and toes and even the end of the tail, the gliding membranes of colugos are the most highly developed of any mammal. Nocturnal creatures, they’ve been observed flying up to 100 meters. When feeding or resting in trees, colugos resemble sloths, moving slowly along branches or hanging beneath them. They spend daylight hours clinging to trunks or below branches, their camouflaged coats blending into the tree bark and making them less visible to predators.