Want to attract more wildlife to your property this autumn? Consider cultivating late-blooming plants that are native to your region of the country 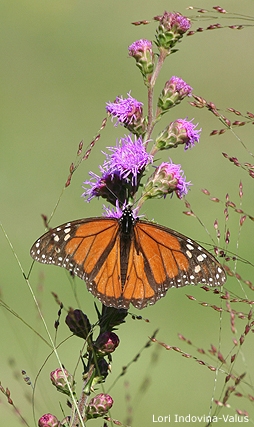 WHEN I FIRST started gardening for wildlife, I tended to focus mostly on spring and summer plants with just a few fall-blooming asters thrown in for good measure. But every year when autumn came to my patch of coastal South Carolina, I would see thrushes and other migratory birds devouring viburnum berries in the woods near my home, while buntings and sparrows swarmed native grasses in adjacent fields. Now I grow a number of late-season shrubs, flowers and grasses to attract wildlife to my backyard habitat in the fall. You can do the same by cultivating certain plants native to your region. Following are some possibilities:

Viburnums: Possumhaw, northern arrowwood and nannyberry are three species of deciduous viburnums that bring birds flocking. Nannyberry, also known as wild raisin, usually holds its blue-black fruit into November or even longer. Possumhaw also keeps its scarlet berries until the colder months, but northern arrowwood’s fruit tends to be stripped early by hungry migrants. All of these shrubs transplant well and require little maintenance. Northern arrowwood is native to the Northeast, nannyberry occurs from Maine to Montana, and possumhaw has a more southern distribution.

Hercules’ club (Aralia spinosa): This tall deciduous shrub, also known as the devil’s walking stick, ranges from New York to the lower Midwest and south to Texas and Florida. In mid-summer, its white flowers bring in bees and butterflies. Purple-black fruits follow in the fall and are a favorite with cardinals, vireos, warblers and thrushes.

Blazing stars: “Hands down, these are among the best nectar sources for butterflies,” says Bob Hendrickson, the Nebraska Statewide Arboretum’s assistant director of horticulture programs. About 40 species of blazing star (above, with monarch), also known as gayfeather and by the genus name of Liatris, are native to the midwestern and eastern United States; several of them flower in autumn. “Dotted gayfeather is one of the last to bloom,” says Hendrickson, who also recommends rough gayfeather. Southern blazing star is another late performer.

Dogwood shrubs: Gray and red-osier dogwoods are fall-fruiting shrubs. “They’re popular with migrating songbirds,” says Hendrickson. “But their fruit doesn’t last long.” Gray dogwood, a dense shrub that provides good cover, is native from Maine to Manitoba and south to Missouri and the Carolinas. Red-osier dogwood is cold-hardy and grows in the northern tier of states from coast to coast. Both species have white berries and colorful fall foliage.

Indiangrass and switchgrass: Both of these tall grasses are attractive to wildlife. Siskins, sparrows and juncos pull down the seed heads and scratch on the ground underneath the stems looking for the fallen food. As a plus, both plants are beautiful in the autumn. Switchgrass ranges across all of the Lower 48 except in the Pacific Coast states, while Indiangrass occurs in the eastern two-thirds of the country.

Prairie dropseed: This dramatic-looking grass, which takes on a pumpkin orange hue as the days become shorter, also produces plentiful seeds for wildlife. Tim Smith, state botanist for the Missouri Department of Conservation, recommends planting it in full sun. “It’s a long-lived perennial,” he says. Native to the grasslands, prairie dropseed grows two to three feet high on well-drained soils.

Three-leaf sumac: Found throughout the West, this shrubby tree feeds dozens of species of wildlife, from chipmunks to evening grosbeaks to prairie chickens. Its red berries begin ripening in late summer. Three-leaf sumacs do best when planted in sunny locations.

False aster: Several species of these daisylike perennials, also known as Boltonia, occur in North America. The one most commonly found in nurseries is native to the coastal plain of the Southeast. “It is showy and a good late bloomer providing nectar and pollen,” says Craig Tufts, NWF’s chief naturalist. The seeds, which ripen in mid- to late fall, are songbird favorites. Two popular cultivars are Snowbank and Pink Beauty.

Perennial sunflowers: Unlike annual sunflowers, the perennial varieties can be aggressive, so it is a good idea to plant them in areas where they have room to spread. Tufts suggests swamp sunflower if you live in the southeastern or Gulf Coast states. Swallowtails, fritillaries and other butterflies feed at the flowers, and when the blooms fade the seeds attract goldfinches. For gardeners in the Northeast or Midwest, Maximilian sunflower is a good choice.

According to Tufts, these sunflowers are a good example of why you should cultivate plants that are only native to the region where you live. Swamp sunflower, he points out, will perform differently when planted outside of its natural range, usually flowering but not producing much in the way of seeds for wildlife. What’s more, adds Tufts, even North American native plants can become invasive when they are introduced into areas of the country where they do not grow naturally, often causing the same problems as exotic species.