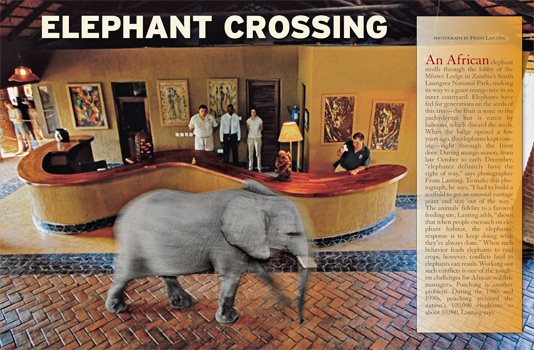 AN AFRICAN ELEPHANT strolls through the lobby of the Mfuwe Lodge in Zambia's South Luangwa National Park, making its way to a giant mango tree in an inner courtyard. Elephants have fed for generations on the seeds of this tree--the fruit is toxic to the pachyderms but is eaten by baboons, which discard the seeds. When the lodge opened a few years ago, the elephants kept coming--right through the front door. During mango season, from late October to early December, "elephants definitely have the right of way," says photographer Frans Lanting. To make this photograph, he says, "I had to build a scaffold to get an unusual vantage point and stay out of the way." The animals' fidelity to a favored feeding site, Lanting adds, "shows that when people encroach on elephant habitat, the elephants' response is to keep doing what they've always done." When such behavior leads elephants to raid crops, however, conflicts fatal to elephants can result. Working out such conflicts is one of the toughest challenges for African wildlife managers. Poaching is another problem. During the 1980s and 1990s, poaching reduced the nation's 100,000 elephants to about 10,000, Lanting says.