Forests Between the Tides

Thriving where no other plants survive, mangroves and the abundant life they shelter are losing ground to coastal development throughout the Tropics 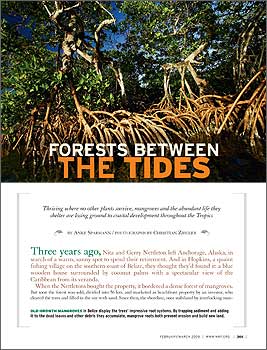 THREE YEARS AGO, Nita and Gerry Nettleton left Anchorage, Alaska, in search of a warm, sunny spot to spend their retirement. And in Hopkins, a quaint fishing village on the southern coast of Belize, they thought they'd found it: a blue wooden house surrounded by coconut palms with a spectacular view of the Caribbean from its veranda. When the Nettletons bought the property, it bordered a dense forest of mangroves.


But soon the forest was sold, divided into 56 lots, and marketed as beachfront property by an investor, who cleared the trees and filled in the site with sand. Since then, the shoreline, once stabilized by interlocking mangrove roots, has unraveled like knitting after the needles are removed. Each high tide erodes another piece of the Nettletons' property. Half their land is already gone, and the couple is desperate to sell.

Mangroves are disappearing not just along Belize's 240 miles of coastline but throughout the world. Over the past two decades, more than a third of all mangrove forests have been destroyed. In some places the situation is particularly dire. Malaysia and Indonesia, for example, have each lost half of their mangrove forests. The Philippines has destroyed 70 percent, Puerto Rico 90 percent, and the Indian state of Kerala has uprooted nearly its entire population of the trees. According to Alfredo Quarto, director of the Mangrove Action Project in Washington State, mangrove forests, "the rain forests of the sea," are among the most threatened habitats on Earth. "They are disappearing at an accelerating rate," he says, "yet with little public notice." 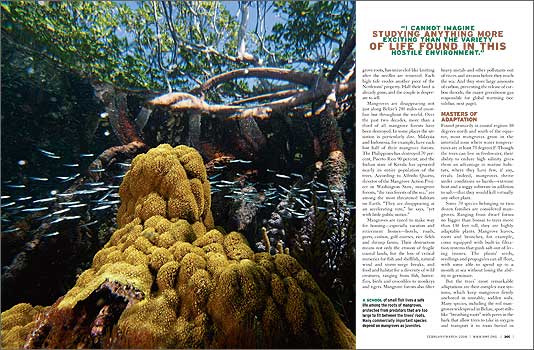 Mangroves are razed to make way for housing--especially vacation and retirement homes--hotels, roads, ports, casinos, golf courses, rice fields and shrimp farms. Their destruction means not only the erosion of fragile coastal lands, but the loss of critical nurseries for fish and shellfish, natural wind and storm-surge breaks, and food and habitat for a diversity of wild creatures, ranging from fish, butterflies, birds and crocodiles to monkeys and tigers. Mangrove forests also filter heavy metals and other pollutants out of rivers and streams before they reach the sea. And they store large amounts of carbon, preventing the release of carbon dioxide, the major greenhouse gas responsible for global warming (see "The Carbon Connection" below).

MASTERS OF ADAPTATION
Found primarily in coastal regions 30 degrees north and south of the equator, most mangroves grow in the intertidal zone where water temperatures are at least 73 degrees F. Though the trees can live in freshwater, their ability to endure high salinity gives them an advantage in marine habitats, where they have few, if any, rivals. Indeed, mangroves thrive under conditions so harsh--extreme heat and a soggy substrate in addition to salt--that they would kill virtually any other plant.

Some 70 species belonging to two dozen families are considered mangroves. Ranging from dwarf forms no bigger than bonsai to trees more than 130 feet tall, they are highly adaptable plants. Mangrove leaves, roots and branches, for example, come equipped with built-in filtration systems that push salt out of living tissues. The plants' seeds, seedlings and propagules can all float, with some able to spend up to a month at sea without losing the ability to germinate. But the trees' most remarkable adaptations are their complex root systems, which keep mangroves firmly anchored in unstable, sodden soils. Many species, including the red mangroves widespread in Belize, sport stiltlike "breathing roots" with pores in the bark that allow trees to take in oxygen and transport it to roots buried in nearly oxygen-free peat. Black mangroves, also common in Belize, suck in oxygen through pneumatophores, roots that stick straight out of the mud like huge nails. And because mangrove roots trap sediment, adding it to their own dead leaves, roots and branches, they not only prevent erosion, they build new land. 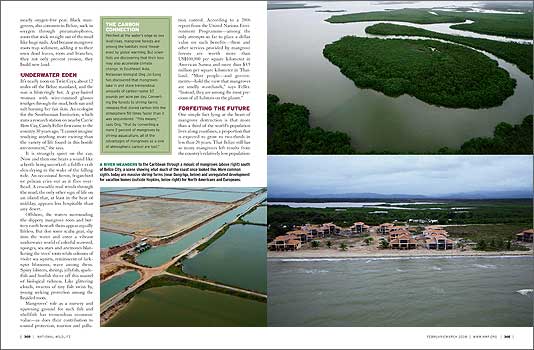 UNDERWATER EDEN
It's nearly noon on Twin Cays, about 12 miles off the Belize mainland, and the sun is blisteringly hot. A gray-haired woman with wire-rimmed glasses trudges through the mud, both sun and salt burning her fair skin. An ecologist for the Smithsonian Institution, which runs a research station on nearby Carrie Bow Cay, Candy Feller first came to the country 30 years ago. "I cannot imagine studying anything more exciting than the variety of life found in this hostile environment," she says.

It is strangely quiet on the cay. Now and then one hears a sound like a bottle being uncorked: a fiddler crab den drying in the wake of the falling tide. An occasional heron, frigatebird or pelican cries out as it flies overhead. A crocodile trail winds through the mud, the only other sign of life on an island that, at least in the heat of midday, appears less hospitable than any desert.

Offshore, the waters surrounding the slippery mangrove roots and buttery earth beneath them appear equally lifeless. But don some scuba gear, slip into the water and enter a vibrant underwater world of colorful seaweed, sponges, sea stars and anemones blanketing the trees' roots while colonies of violet sea squirts, reminiscent of larkspur blossoms, wave among them. Spiny lobsters, shrimp, jellyfish, spadefish and boxfish thrive off this mantel of biological richness. Like glittering clouds, swarms of tiny fish swim by, young seeking protection among the braided roots.

Mangroves' role as a nursery and spawning ground for such fish and shellfish has tremendous economic value--as does their contribution to coastal protection, tourism and pollution control. According to a 2006 report from the United Nations Environment Programme--among the only attempts so far to place a dollar value on such benefits--these and other services provided by mangrove forests are worth more than US$100,000 per square kilometer in American Samoa and more than $3.5 million per square kilometer in Thailand. "Most people--and governments--hold the view that mangroves are smelly wastelands," says Feller. "Instead, they are among the most precious of all habitats on the planet." 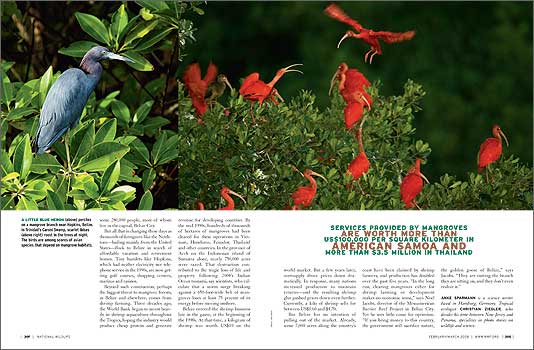 FORFEITING THE FUTURE
One simple fact lying at the heart of mangrove destruction is that more than a third of the world's population lives along coastlines, a proportion that is expected to grow to two-thirds in less than 20 years. That Belize still has so many mangroves left results from the country's relatively low population: some 280,000 people, most of whom live in the capital, Belize City.

But all that is changing these days as thousands of foreigners like the Nettletons--hailing mainly from the United States--flock to Belize in search of affordable vacation and retirement homes. Tiny hamlets like Hopkins, which had neither electricity nor telephone service in the 1990s, are now getting golf courses, shopping centers, marinas and casinos.

Beyond such construction, perhaps the biggest threat to mangrove forests, in Belize and elsewhere, comes from shrimp farming. Three decades ago, the World Bank began to invest heavily in shrimp aquaculture throughout the Tropics, hoping the industry would produce cheap protein and generate revenue for developing countries. By the mid-1990s, hundreds of thousands of hectares of mangroves had been cleared for these operations in Vietnam, Honduras, Ecuador, Thailand and other countries. In the province of Aceh on the Indonesian island of Sumatra alone, nearly 750,000 acres were razed. That destruction contributed to the tragic loss of life and property following 2004's Indian Ocean tsunami, say scientists, who calculate that a storm surge breaking against a 650-foot-wide belt of mangroves loses at least 75 percent of its energy before moving onshore.

Belize entered the shrimp business late in the game, at the beginning of the 1990s. At that time, a kilogram of shrimp was worth US$10 on the world market. But a few years later, oversupply drove prices down dramatically. In response, many nations increased production to maintain returns--and the resulting shrimp glut pushed prices down even further. Currently, a kilo of shrimp sells for between US$1.60 and $4.70.

But Belize has no intention of pulling out of the market. Already, some 7,000 acres along the country's coast have been claimed by shrimp farmers, and production has doubled over the past five years. "In the long run, clearing mangroves either for shrimp farming or development makes no economic sense," says Noel Jacobs, director of the Mesoamerican Barrier Reef Project in Belize City. Yet he sees little cause for optimism. "If you bring money to this country, the government will sacrifice nature, the golden goose of Belize," says Jacobs. "They are cutting the branch they are sitting on, and they don't even realize it."

Anke Sparmann is a science writer based in Hamburg, Germany.

Perched at the water's edge as sea level rises, mangrove forests are among the habitats most threatened by global warming. But scientists are discovering that their loss may also accelerate climate change. In Southeast Asia, Malaysian biologist Ong Jin Eong has discovered that mangroves take in and store tremendous amounts of carbon--some 3.7 pounds per acre per day. Converting the forests to shrimp farms releases that stored carbon into the atmosphere 50 times faster than it was sequestered. "This means," says Ong, "that by converting a mere 2 percent of mangroves to shrimp aquaculture, all of the advantages of mangroves as a sink of atmospheric carbon are lost."