A fledgling glaucous gull strengthens its wings in preparation for its first flight, while a parent looks on 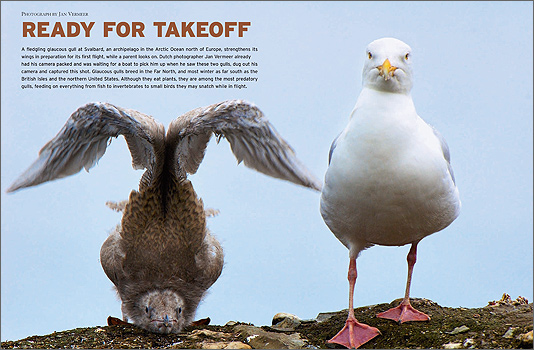 A FLEDGLING glaucous gull at Svalbard, an archipelago in the Arctic Ocean north of Europe, strengthens its wings in preparation for its first flight, while a parent looks on. Dutch photographer Jan Vermeer already had his camera packed and was waiting for a boat to pick him up when he saw these two gulls, dug out his camera and captured this shot. Glaucous gulls breed in the Far North, and most winter as far south as the British Isles and the northern United States. Although they eat plants, they are among the most predatory gulls, feeding on everything from fish to invertebrates to small birds they may snatch while in flight.