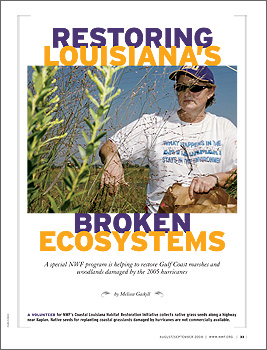 LOUISIANA RESIDENT Mike Dever spent much of his childhood in the 1970s exploring Sam Houston Jones State Park on the banks of the Calcasieu River in the western part of the state, and his two sons in more recent years often walked and rode bicycles there.

Then, in September 2005, the park’s 1,087 acres of mixed pine and hardwood forest were drastically changed when Hurricane Rita roared through.

“Trees used to be so thick that you couldn’t see very far,” says Dever, an environmental consultant in Lake Charles. “But the storm blew over so much of the old growth that you could see hundreds of yards, clear to the other side of the river, where you couldn’t before.”

Last fall, Dever volunteered to work for the Coastal Louisiana Habitat Restoration Initiative, an NWF program designed to restore ecosystems damaged by Hurricanes Rita and Katrina. The state park was one of the sites where he worked, removing invasive Chinese tallow trees, which had proliferated in the newly opened areas.

Dever pulled smaller seedlings mostly by hand, using an axe as necessary. Other volunteers cut larger tallows with chain saws. “The smaller seedlings had come up by the hundreds,” he says. “I could pull up two or three at a time.” 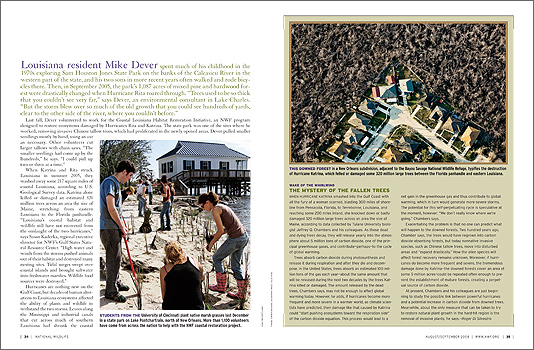 When Katrina and Rita struck Louisiana in summer 2005, they washed away some 217 square miles of coastal Louisiana, according to U.S. Geological Survey data. Katrina alone killed or damaged an estimated 320 million trees across an area the size of Maine, stretching from eastern Louisiana to the Florida panhandle.

“Louisiana’s coastal habitat and wildlife still have not recovered from the onslaught of the two hurricanes,” says Susan Kaderka, regional executive director for NWF’s Gulf States Natural Resource Center. “High water and winds from the storms pushed animals out of their habitat and destroyed many nesting sites. Tidal surges swept over coastal islands and brought saltwater into freshwater marshes. Wildlife food sources were destroyed.”

Hurricanes are nothing new on the Gulf Coast, but decades of human alterations to Louisiana ecosystems affected the ability of plants and wildlife to withstand the two storms. Levees along the Mississippi and industrial canals that cut across much of southern Louisiana had shrunk the coastal marshes that might have kept storm surges from rushing inland. Fast-growing nonnative plant species—such as Chinese tallow trees and cogon, a Japanese grass, brought into the area by human activity—are crowding out native species in areas where the storms knocked down woodlands.

“Had we not changed the dynamic nature of this system, there would not have been such dramatic scenes of devastation,” says Denise Reed, a coastal geomorphologist and professor at the University of New Orleans. “In their natural state, these are hardy, resilient systems that have been around a long time.”

Because development has crippled nature’s ability to recover from storms like Rita and Katrina, people have stepped in to help repair the damage.

NWF launched the coastal restoration initiative in summer 2007, funded with a grant from the National Fish and Wildlife Foundation and with additional money from Shell Oil. This project seeks during its first year to revegetate 500 acres of marsh lands, clear invasive species from 6,000 acres of wetlands and remove 10 tons of trash and debris. 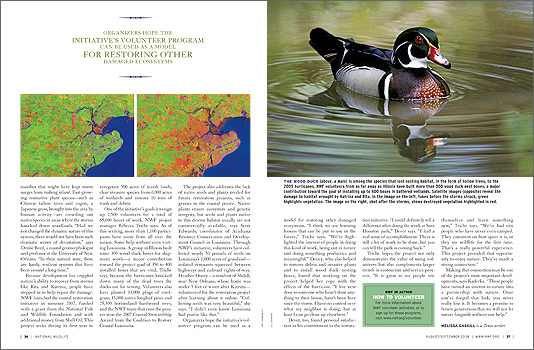 One of the initiative’s goals is to sign up 2,500 volunteers for a total of 65,000 hours of work, NWF project manager Rebecca Triche says. As of this writing, more than 1,100 participants have come from all over the nation. Some help without even visiting Louisiana. A group in Illinois built some 300 wood duck boxes for shipment south—a major contribution toward the project goal of 350 to 400 installed boxes that are vital, Triche says, because the hurricanes knocked down many of the dead trees the ducks use for nesting. Volunteers also have planted 14,000 plugs of cordgrass, 15,000 native longleaf pines and 25,300 bottomland hardwood trees, and the NWF team that runs the project won the 2007 Coastal Stewardship Award from the Coalition to Restore Coastal Louisiana.

The project also addresses the lack of native seeds and plants needed for future restoration projects, such as grasses in the coastal prairie. Native plants ensure ecosystem and genetic integrity, but seeds and plants native to this diverse habitat usually are not commercially available, says Scott Edwards, coordinator of Acadiana Resource Conservation and Development Council in Louisiana. Through NWF’s initiative, volunteers have collected nearly 50 pounds of seeds on Louisiana’s 1,000 acres of grassland—isolated remnants squeezed between highways and railroad rights-of-way. Heather Doney—a resident of Slidell, near New Orleans, whose home was under 5 feet of water after Katrina—volunteered for the restoration project after learning about it online.

“Collecting seeds was very beautiful,” she says. “I didn’t even know Louisiana had prairie like that.”

Organizers hope the initiative’s volunteer program can be used as a model for restoring other damaged ecosystems.

“I think we are learning lessons that can be put to use in the future,” Triche says. “We’ve highlighted the interest of people in doing this kind of work, being out in nature and doing something productive and meaningful.”

Doney, who also helped to remove debris and invasive plants and to install wood duck nesting boxes, found that working on the project helped her cope with the effects of the hurricane.

“I live next door to someone who hasn’t done anything to their house, hasn’t been here since the storm. I have no control over what my neighbor is doing, but at least I can go clean up elsewhere.”

Dever, too, found personal satisfaction in his commitment to the restoration initiative.

“I could definitely tell a difference after doing the work at Sam Houston park,” Dever says. “I had a real sense of accomplishment. There is still a lot of work to be done, but you can tell the park is coming back.”

Triche hopes the project not only demonstrates the value of using volunteers but also complements larger trends in ecotourism and service projects.

“It is great to see people test themselves and learn something new,” Triche says. “We’ve had city people who have never even camped. They comment on how quiet it is, or they see wildlife for the first time. That’s a really powerful experience. This project provided that opportunity to enjoy nature. They’ve made a strong connection.”

Making that connection may be one of the project’s most important developments, says Kaderka. “These people have turned an interest in nature into a partnership with nature. Once you’ve forged that link, you never really lose it. It becomes a promise to future generations that we will not let nature languish without our help.”

Melissa Gaskill is a Texas writer.

Wake of the Whirlwind: The Mystery of the Fallen Trees

When Hurricane Katrina smashed into the Gulf Coast with all the fury of a woman scorned, blasting 300 miles of shoreline from Pensacola, Florida, to Terrebonne, Louisiana, and reaching some 200 miles inland, she knocked down or badly damaged 320 million large trees across an area the size of Maine, according to data collected by Tulane University biologist Jeffrey Q. Chambers and his colleagues. As those dead and dying trees decay, they will release yearly into the atmosphere about 5 million tons of carbon dioxide, one of the principal greenhouse gases, and contribute—perhaps—to the cycle of global warming.

Trees absorb carbon dioxide during photosynthesis and release it during respiration and after they die and decompose. In the United States, trees absorb an estimated 100 million tons of the gas each year—about the same amount that will be released during the next two decades by the trees Katrina killed or damaged. The amount released by the dead trees, Chambers says, may not be enough to affect global warming today. However, he adds, if hurricanes become more frequent and more severe in a warmer world, as climate scientists have predicted, then damage like that caused by Katrina could “start pushing ecosystems toward the respiration side” of the carbon dioxide equation. This process would lead to a net gain in the greenhouse gas and thus contribute to global warming, which in turn would generate more severe storms. The potential for this self-perpetuating cycle is speculative at the moment, however: “We don’t really know where we’re going,” Chambers says.

Exacerbating the problem is that no one can predict what will happen to the downed forests. Two hundred years ago, Chamber says, the trees would have regrown into carbon dioxide-absorbing forests, but today nonnative invasive species, such as Chinese tallow trees, move into disturbed areas and “expand drastically.” How the alien species will affect forest recovery remains unknown. Moreover, if hurricanes do become more frequent and severe, the tremendous damage done by Katrina—the downed forests cover an area of some 5 million acres—could be repeated often enough to prevent the establishment of mature forests, creating a perpetual source of carbon dioxide.

At present, Chambers and his colleagues are just beginning to study the possible link between powerful hurricanes and a potential increase in carbon dioxide from downed trees. Meanwhile, about the only measure that can be taken to try to restore natural plant growth in the hard-hit region is the removal of invasive plants, he says. — Roger Di Silvestro

NWF in Action: How to Volunteer

For more information about NWF volunteer activities, or to sign up for these programs, visit www.nwf.org/volunteer.