Robot to the Rescue

In a study of how oil and gas drilling affect breeding sage-grouse, a biologist relies on insights from a mechanical bird 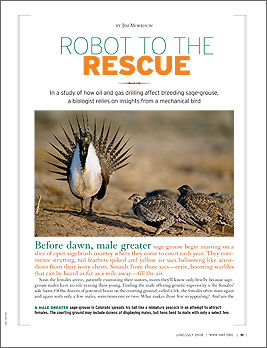 BEFORE DAWN, male greater sage-grouse begin massing on a slice of open sagebrush country where they come to court each year. They commence strutting, tail feathers spiked and yellow air sacs ballooning like accordions from their ivory chests. Sounds from those sacs—eerie, booming warbles that can be heard as far as a mile away—fill the air.

Soon the females arrive, patiently examining their suitors, mates they’ll know only briefly because sage-grouse males have no role rearing their young. Finding the male offering genetic superiority is the females’ sole focus. Of the dozens of potential beaus on the courting ground, called a lek, the females often mate again and again with only a few males, sometimes one or two. What makes those few so appealing? And are the males still being heard well enough to get their mating message across, or are their calls being drowned by background noise from oil and gas operations going on throughout large portions of their range?

To find answers that could lead to better protection for the birds and their habitat, Gail Patricelli, a biologist from the University of California–Davis, beats the first morning rays of a spring sun to leks near Lander, Wyoming, to flirt with male greater sage-grouse. She does it by proxy, of course, using a fembot—a mechanical sage-grouse impostor that runs on toy railroad tracks and carries a small camera and microphone. Moving a joystick, Patricelli can make the robot bob its head and pivot to face its suitors. “There’s not a lot of research on the importance of these social interactions between males and females and those social skills which all of us know ultimately are important, but hard to quantify,” Patricelli says. “So the robot allows you to become part of a conversation between two animals.” The camera and microphone record “exactly what a female would see when she’s out on the lek,” she says, “allowing me to get into the female’s head and understand what makes some males successful and other males not successful.”

Patricelli has only one sage-grouse fembot, which she moves from male to male on one lek. Before taking the mechanical bird into the field, she observed females on leks and practiced their mating moves with the robot, although, she says, the “penalty for mistakes is pretty low.” Males have been known to try to mate with cow pies. 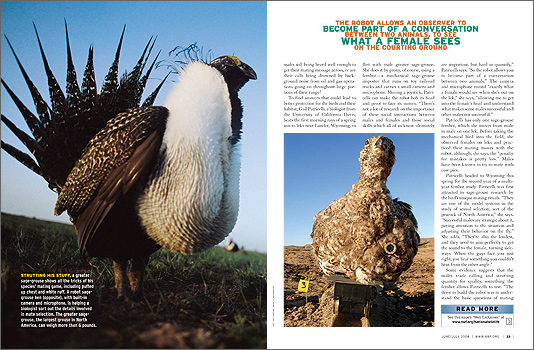 Patricelli headed to Wyoming this spring for the second year of a multi-year fembot study. Patricelli was first attracted to sage-grouse research by the bird’s unique mating rituals. “They are one of the model systems in the study of sexual selection, sort of the peacock of North America,” she says. “Successful males are strategic about it, paying attention to the situation and adjusting their behavior on the fly.” She adds, “They’re also the loudest, and they need to aim perfectly to get the sound to the female, turning sideways. When the guys face you just right, you hear something you couldn’t hear from the other angle.”

Some evidence suggests that the males trade calling and strutting quantity for quality, something the fembot allows Patricelli to test. “The drive to build the robot was to understand the basic questions of mating behavior and how sexual selection can drive complex interactions between animals,” she says.

A microphone array on the lek site locates males by triangulating the sounds they make. Using that data, Patricelli and her researchers can create detailed maps of male territories and examine the vocal interactions along their boundaries.

Her discoveries about the importance of sound quality to sage-grouse courtship feed into another study she and her graduate student, Jessica Blickley, are doing on how noise from natural gas drilling and methane coal-bed extraction affects sage-grouse.

The greater sage-grouse is a native of sagebrush country in the western United States and southern Alberta and Saskatchewan. (A second sage-grouse species, the Gunnison sage-grouse—about a third smaller and subtly different in plumage and behavior—is found only in southwestern Colorado and southeastern Utah.) A 2004 study by the Western Association of Fish and Wildlife Agencies concluded that 44 percent of sagebrush habitat, which once covered 155 million acres, has been lost to cultivation, livestock rearing and mineral extraction. Greater sage-grouse populations have declined in some areas by 90 percent since the 1970s. North America’s largest grouse numbered in the millions when Lewis and Clark labeled them the “cock of the plain” in 1805. The association estimates U.S. sage-grouse populations at between 140,000 and 250,000 birds today. Proposals to protect the grouse under the Endangered Species Act have been denied, mostly recently in 2005. In December, a federal district court judge in Idaho ordered the U.S. Fish and Wildlife Service to reconsider listing the bird, because the agency ignored expert advice and allowed improper political interference when it denied federal protection. The greater sage-grouse is listed as endangered in Canada. 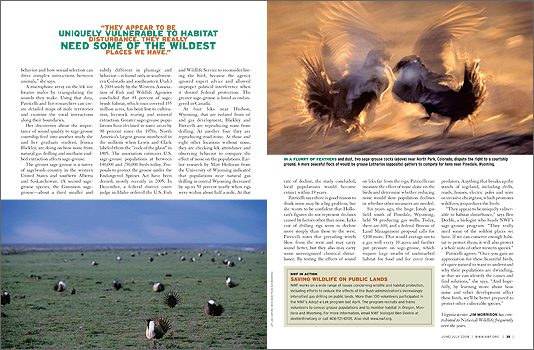 At four leks near Hudson, Wyoming, that are isolated from oil and gas development, Blickley and Patricelli are reproducing noise from drilling. At another four they are reproducing road noise. At those and eight other locations without noise, they are checking lek attendance and observing behavior to compare the effect of noise on the populations. Earlier research by Matt Holloran from the University of Wyoming indicated that populations near natural gas drilling in central Wyoming decreased by up to 50 percent yearly when rigs were within about half a mile. At that rate of decline, the study concluded, local populations would become extinct within 19 years.

Patricelli says there is good reason to think noise may be a big problem, but she wants to be confident that Holloran’s figures do not represent declines caused by factors other than noise. Leks east of drilling rigs seem to decline more steeply than those to the west. Patricelli notes that prevailing winds blow from the west and may carry sound better, but they also may carry some unrecognized chemical disturbance. By testing the effects of sound on leks far from the rigs, Patricelli can measure the effect of noise alone on the birds and determine whether reducing noise would slow population declines or whether other measures are needed.

Six years ago, the huge Jonah gas field south of Pinedale, Wyoming, held 58 producing gas wells. Today, there are 600, and a federal Bureau of Land Management proposal calls for 3,100 more. That would average out to a gas well every 10 acres and further put pressure on sage-grouse, which require large swaths of undisturbed habitat for food and for cover from predators. Anything that breaks up the stands of sageland, including drills, roads, houses, electric poles and wire or invasive cheatgrass, which promotes wildfires, jeopardizes the birds.

“They appear to be uniquely vulnerable to habitat disturbance,” says Ben Deeble, a biologist who heads NWF’s sage-grouse program. “They really need some of the wildest places we have. If we can conserve enough habitat to protect them, it will also protect a whole suite of other western species.”

Patricelli agrees. “Once you gain an appreciation for these beautiful birds, it’s quite natural to want to understand why their populations are dwindling, so that we can identify the causes and find solutions,” she says. “And hopefully, by learning more about how noise and other development affect these birds, we’ll be better prepared to protect other vulnerable species.”

Virginia writer Jim Morrison has contributed to National Wildlife frequently over the years.

Grouse of the Purple Sage

The greater sage-grouse was first recognized as a species by the Lewis and Clark expedition, which initially encountered the bird on June 6, 1805, at the mouth of the Marias River in Montana. The men of the expedition called it the “cock of the Plains” or the “heath cock,” after a similar bird native to the Northeast. Lewis killed one in October 1805 and observed that the birds feed on grasshoppers and wild hyssop, today called sagebrush.

The largest North American grouse species, the greater sage-grouse ranges from northern Washington state and southern Saskatchewan to southwestern Colorado, southern Utah and eastern California. Its range was wider in the early part of the nineteenth century, before habitat loss and uncontrolled hunting wiped it out in British Columbia, Kansas, Nebraska, Oklahoma, Arizona and New Mexico.

These grouse lives in foothills, plains and mountain areas home to sagebrush. They feed primarily on sagebrush leaves but also eat fruit, insects, flowers, buds and other plant parts. They are not migratory, but some grouse do move between higher and lower elevations as temperatures cool, returning in warm weather to higher elevations, where they find moist plants that may provide them with all the water they need during dry spells.

Males and females meet for mating on open spots among sagebrush. These mating grounds, which may be used through many years, are called “leks.” There males engage in courtship displays that attract females. After mating, the females nest on the ground in grassy areas or under sagebrush and typically lay seven to nine eggs, though they may produce as few as six and as many as thirteen. Males do not help rear the young.

Hatchling sage-grouse are covered with down and able to follow their mother soon after breaking out of the shell. She usually leads then to water at a stream or pond. Living on a diet mostly of insects, the young begin flying for short distances when about two weeks old. At five weeks, they can make long flights. When fully grown, they reach up to 30 inches long and in excess of 6 pounds.

The greater sage-grouse is declining in the face of habitat disruption, a challenge likely to worsen as global warming increases rainfall in parts of the West, reducing the extent of semiarid sagebrush habitat.

For more information on the early history of the greater sage-grouse, visit www.lewis-clark.org.—Roger Di Silvestro