Scenes from a Desert Drama 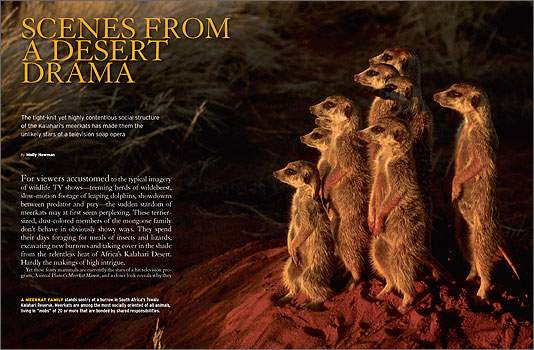 FOR VIEWERS ACCUSTOMED to the typical imagery of wildlife TV shows--teeming herds of wildebeest, slow-motion footage of leaping dolphins, showdowns between predator and prey--the sudden stardom of meerkats may at first seem perplexing. These terrier-sized, dust-colored members of the mongoose family don't behave in obviously showy ways. They spend their days foraging for meals of insects and lizards, excavating new burrows and taking cover in the shade from the relentless heat of Africa's Kalahari Desert. Hardly the makings of high intrigue.

Yet these feisty mammals are currently the stars of a hit television program, Animal Planet's Meerkat Manor, and a closer look reveals why they make for such a compelling show. Meerkats are among the most socially oriented of all mammals. Their small, tight-knit family groups (or "mobs") share bonds of affection and responsibility. But they're also frequently riven by disputes over mating privileges and individual power. A dominant female grooms her daughter one moment, then snaps viciously at her hindquarters to drive her away. Subordinate males and females, discouraged from breeding by the group's dominant pair, sneak into the brush together for illicit coupling. As Caroline Hawkins, creator and series editor of Meerkat Manor says, "Their social structure lends itself naturally to a soap opera format." 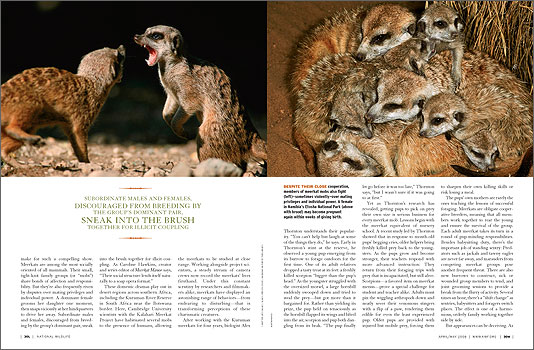 These domestic dramas play out in desert regions across southern Africa, including the Kuruman River Reserve in South Africa near the Botswana border. Here, Cambridge University scientists with the Kalahari Meerkat Project have habituated several mobs to the presence of humans, allowing the meerkats to be studied at close range. Working alongside project scientists, a steady stream of camera crews now record the meerkats' lives firsthand. Under this constant scrutiny by researchers and filmmakers alike, meerkats have displayed an astonishing range of behaviors--from endearing to disturbing--that is transforming perceptions of these charismatic creatures.

After working with the Kuruman meerkats for four years, biologist Alex Thornton understands their popularity. "You can't help but laugh at some of the things they do," he says. Early in Thornton's stint at the reserve, he observed a young pup emerging from its burrow to forage outdoors for the first time. One of its adult relatives dropped a tasty treat at its feet: a freshly killed scorpion "bigger than the pup's head." As the youngster struggled with the oversized morsel, a large hornbill suddenly swooped down and tried to steal the prey--but got more than it bargained for. Rather than yielding its prize, the pup held on tenaciously as the hornbill flapped its wings and lifted into the air, scorpion and pup both dangling from its beak. "The pup finally let go before it was too late," Thornton says, "but I wasn't sure if it was going to at first."

Yet as Thornton's research has revealed, getting pups to pick on prey their own size is serious business for every meerkat mob. Lessons begin with the meerkat equivalent of nursery school. A recent study led by Thornton showed that in response to month-old pups' begging cries, older helpers bring freshly killed prey back to the youngsters. As the pups grow and become stronger, their teachers respond with more advanced instruction: They return from their foraging trips with prey that is incapacitated, but still alive. Scorpions--a favored item on meerkat menus--prove a special challenge for student and teacher alike. Adults must pin the wiggling arthropods down and neatly sever their venomous stingers with a flip of a paw, rendering them edible for even the least experienced pup. Older pups are provided with injured but mobile prey, forcing them to sharpen their own killing skills or risk losing a meal. 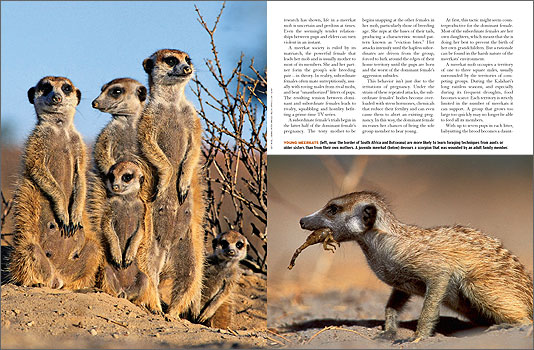 The pups' own mothers are rarely the ones teaching the lessons of successful foraging. Meerkats are obligate cooperative breeders, meaning that all members work together to rear the young and ensure the survival of the group. Each adult meerkat takes its turn in a round of pup-minding responsibilities. Besides babysitting duty, there's the important job of standing sentry: Predators such as jackals and tawny eagles are never far away, and marauders from competing meerkat groups pose another frequent threat. There are also new burrows to construct, sick or wounded group members to tend, and joint grooming sessions to provide a break from the flurry of activity. Several times an hour, there's a "shift change" as sentries, babysitters and foragers switch places. The effect is one of a harmonious, orderly family working together side by side.

But appearances can be deceiving. As research has shown, life in a meerkat mob is uncertain and perilous at times. Even the seemingly tender relationships between pups and elders can turn violent in an instant. 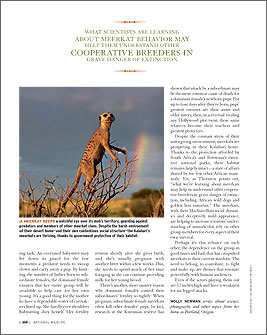 A meerkat society is ruled by its matriarch, the powerful female that leads her mob and is usually mother to most of its members. She and her partner form the group's sole breeding pair--in theory. In reality, subordinate females often mate surreptitiously, usually with roving males from rival mobs, and bear "unauthorized" litters of pups. The resulting tension between dominant and subordinate females leads to rivalry, squabbling and hostility befitting a prime-time TV series.

A subordinate female's trials begin in the latter half of the dominant female's pregnancy. The testy mother-to-be begins snapping at the other females in her mob, particularly those of breeding age. She nips at the bases of their tails, producing a characteristic wound pattern known as "eviction bites." Her attacks intensify until the hapless subordinates are driven from the group, forced to lurk around the edges of their home territory until the pups are born and the worst of the dominant female's aggression subsides.

This behavior isn't just due to the irritations of pregnancy. Under the strain of these repeated attacks, the subordinate females' bodies become overloaded with stress hormones, chemicals that reduce their fertility and can even cause them to abort an existing pregnancy. In this way, the dominant female increases her chances of being the sole group member to bear young.

At first, this tactic might seem counterproductive for the dominant female. Most of the subordinate females are her own daughters, which means that she is doing her best to prevent the birth of her own grandchildren. But a rationale can be found in the harsh nature of the meerkats' environment. A meerkat mob occupies a territory of one to three square miles, usually surrounded by the territories of competing groups. During the Kalahari's long rainless seasons, and especially during its frequent droughts, food becomes scarce. Each territory is strictly limited in the number of meerkats it can support. A group that grows too large too quickly may no longer be able to feed all its members.

With up to seven pups in each litter, babysitting the brood becomes a daunting task. An overtaxed babysitter may let down its guard for the few moments a predator needs to swoop down and carry away a pup. By limiting the number of babies born to subordinate females, the dominant female ensures that her entire group will be available to help care for her own young. It's a good thing for the mother to have a dependable roster of caretakers lined up: She hardly ever shoulders babysitting duty herself. Her fertility returns shortly after she gives birth, and she's usually pregnant with another litter within a few weeks. Plus, she needs to spend much of her time foraging so she can continue providing milk for her young brood.

There's another, more sinister reason why dominant females control their subordinates' fertility so tightly: When pregnant, subordinate female meerkats often kill other females' pups. In fact, research at the Kuruman reserve has shown that attack by a subordinate may be the most common cause of death for a dominant female's newborn pups. For up to four days after they're born, pups' greatest enemies are their aunts and older sisters; then, in a reversal rivaling any Hollywood plot twist, those same relatives become their teachers and greatest protectors.

Despite the constant stress of their unforgiving environment, meerkats are prospering in their Kalahari home. Thanks to the protection afforded by South Africa's and Botswana's extensive national parks, their habitat remains largely intact--a state of affairs shared by too few other African mammals. Yet, as Thornton points out, "what we're learning about meerkats may help us understand other cooperative breeders in grave danger of extinction, including African wild dogs and golden lion tamarins." The meerkats, with their Machiavellian social dynamics and deceptively mild appearance, are helping to increase scientists' understanding of animals that rely on other group members for every aspect of their own survival.

Perhaps it's this reliance on each other, the dependence on the group in good times and bad, that has catapulted meerkats to their current stardom. The need to belong, to contribute, to fight and make up, are themes that resonate powerfully with human audiences.

Even if the actors playing them out are 12 inches high and have a weakness for six-legged snacks.

Molly Newman writes about science, photography and other topics from her home in Portland, Oregon.