Seeing Birds at Their Best

Every year, thousands of images of avian behavior make their way across our desks; here are some of our recent favorites 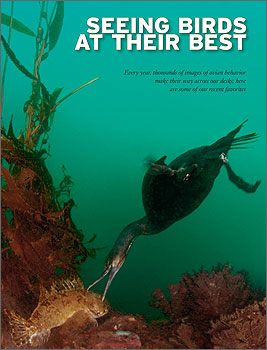 In California’s Monterey Bay, a Brandt’s cormorant dives for a supersized meal: an adult cabezon—likely outweighing the bird—guarding a nest full of eggs (above). Californian Kawika Chetron photographed the bird in January 2007. Two months later, Chetron disappeared from his boat while on a solo diving trip off the state’s northern coast. 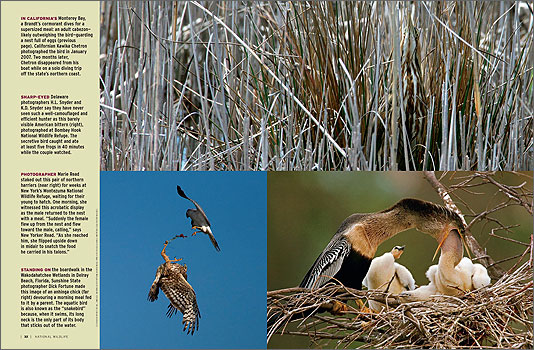 Sharp-eyed Delaware photographers H.L. Snyder and K.D. Snyder say they have never seen such a well-camouflaged and efficient hunter as this barely visible American bittern (top), photographed at Bombay Hook National Wildlife Refuge. The secretive bird caught and ate at least five frogs in 40 minutes while the couple watched.

Photographer Marie Read staked out this pair of northern harriers (bottom left) for weeks at New York’s Montezuma National Wildlife Refuge, waiting for their young to hatch. One morning, she witnessed this acrobatic display as the male returned to the nest with a meal. “Suddenly the female flew up from the nest and flew toward the male, calling,” says New Yorker Read. “As she reached him, she flipped upside down in midair to snatch the food he carried in his talons.”

Standing on the boardwalk in the Wakodahatchee Wetlands in Delray Beach, Florida, Sunshine State photographer Dick Fortune made this image of an anhinga chick (bottom right) devouring a morning meal fed to it by a parent. The aquatic bird is also known as the “snakebird” because, when it swims, its long neck is the only part of its body that sticks out of the water. 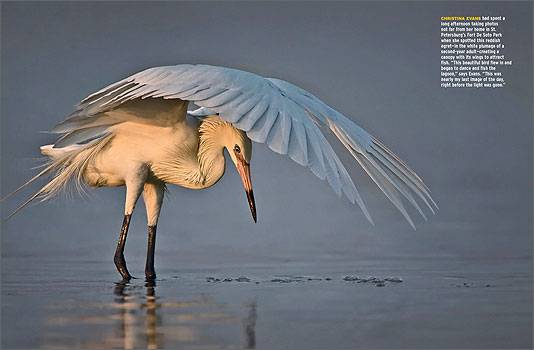 Christina Evans had spent a long afternoon taking photos not far from her home in St. Petersburg’s Fort De Soto Park when she spotted this reddish egret—in the white plumage of a second-year adult—creating a canopy with its wings to attract fish. “This beautiful bird flew in and began to dance and fish the lagoon,” says Evans. “This was nearly my last image of the day, right before the light was gone.” 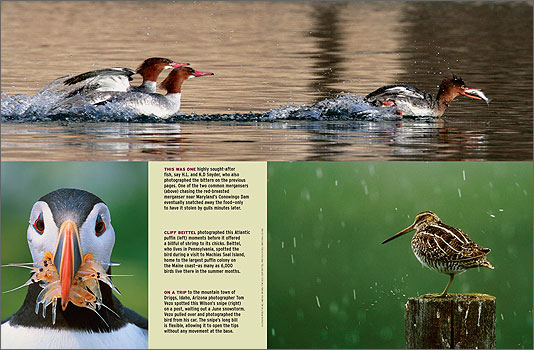 This was one highly sought-after fish, say H.L. and K.D Snyder. One of the two common mergansers (top) chasing the red-breasted merganser near Maryland’s Conowingo Dam eventually snatched away the food—only to have it stolen by gulls minutes later.

Cliff Beittel photographed this Atlantic puffin (bottom left) moments before it offered a billful of shrimp to its chicks. Beittel, who lives in Pennsylvania, spotted the bird during a visit to Machias Seal Island, home to the largest puffin colony on the Maine coast—as many as 6,000 birds live there in the summer months.

On a trip to the mountain town of Driggs, Idaho, Arizona photographer Tom Vezo spotted this Wilson’s snipe (bottom left) on a post, waiting out a June snowstorm. Vezo pulled over and photographed the bird from his car. The snipe’s long bill is flexible, allowing it to open the tips without any movement at the base.