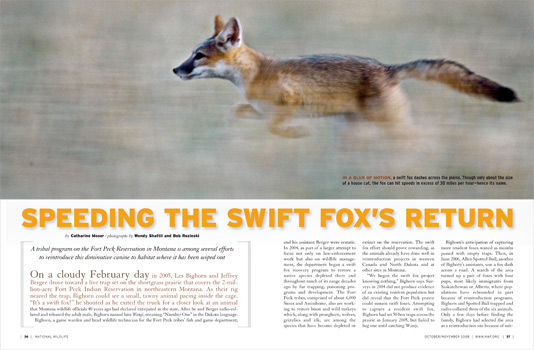 ON A CLOUDY February day in 2005, Les Bighorn and Jeffrey Berger drove toward a live trap set on the shortgrass prairie that covers the 2-million-acre Fort Peck Indian Reservation in northeastern Montana. As their rig neared the trap, Bighorn could see a small, tawny animal pacing inside the cage. "It's a swift fox!" he shouted as he exited the truck for a closer look at an animal that Montana wildlife officials 40 years ago had declared extirpated in the state. After he and Berger radio-collared and released the adult male, Bighorn named him Wanji, meaning "Number One" in the Dakota language.

Bighorn, a game warden and head wildlife technician for the Fort Peck tribes' fish and game department, and his assistant Berger were ecstatic. In 2004, as part of a larger attempt to focus not only on law-enforcement work but also on wildlife management, the department began a swift fox recovery program to restore a native species depleted there and throughout much of its range decades ago by fur trapping, poisoning programs and development. The Fort Peck tribes, comprised of about 6,000 Sioux and Assiniboine, also are working to restore bison and wild turkeys which, along with pronghorn, wolves, grizzlies and elk, are among the species that have become depleted or extinct on the reservation. The swift fox effort should prove rewarding, as the animals already have done well in reintroduction projects in western Canada and North Dakota and at other sites in Montana.

"We began the swift fox project knowing nothing," Bighorn says. Surveys in 2004 did not produce evidence of an existing resident population but did reveal that the Fort Peck prairie could sustain swift foxes. Attempting to capture a resident swift fox, Bighorn had set 50 box traps across the prairie in January 2005, but failed to bag one until catching Wanji.

Bighorn's anticipation of capturing more resident foxes waned as months passed with empty traps. Then, in June 2006, Allen Spotted Bull, another of Bighorn's assistants, saw a fox dash across a road. A search of the area turned up a pair of foxes with four pups, most likely immigrants from Saskatchewan or Alberta, where populations have rebounded in part because of reintroduction programs. Bighorn and Spotted Bull trapped and radio-collared three of the six animals. Only a few days before finding the family, Bighorn had selected the area as a reintroduction site because of suitable habitat, abundant prey and few coyotes. "Finding the resident foxes validated our surveys and data," Bighorn says. "We did it right." 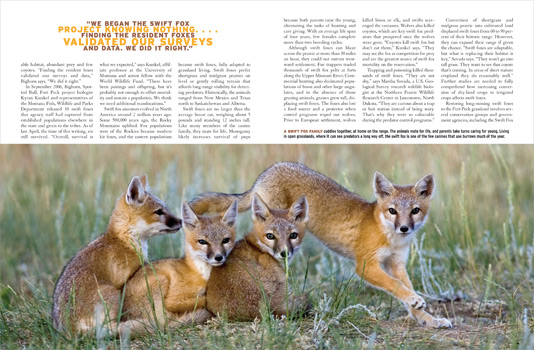 In September 2006, Bighorn, Spotted Bull, Fort Peck project biologist Kyran Kunkel and representatives of the Montana Fish, Wildlife and Parks Department released 10 swift foxes that agency staff had captured from established populations elsewhere in the state and given to the tribes. As of last April, the time of this writing, six still survived. "Overall, survival is what we expected," says Kunkel, affiliate professor at the University of Montana and senior fellow with the World Wildlife Fund. "There have been pairings and offspring, but it's probably not enough to offset mortality and sustain a population. We think we need additional translocations."

Swift foxes are no larger than the average house cat, weighing about 5 pounds and standing 12 inches tall. Like many members of the canine family, they mate for life. Monogamy likely increases survival of pups because both parents raise the young, alternating the tasks of hunting and care giving. With an average life span of four years, few females complete more than two breeding cycles.

Although swift foxes can blaze across the prairie at more than 30 miles an hour, they could not outrun westward settlement. Fur trappers traded thousands of swift fox pelts at forts along the Upper Missouri River. Commercial hunting also decimated populations of bison and other large ungulates, and in the absence of those grazing animals, grasses grew tall, displacing swift foxes. The foxes also lost a food source and a protector when control programs wiped out wolves. Prior to European settlement, wolves killed bison or elk, and swifts scavenged the carcasses. Wolves also killed coyotes, which are key swift fox predators that prospered once the wolves were gone. "Coyotes kill swift fox but don't eat them," Kunkel says. "They may see the fox as competition for prey and are the greatest source of swift fox mortality on the reservation."

Trapping and poisoning killed thousands of swift foxes. "They are not shy," says Marsha Sovada, a U.S. Geological Survey research wildlife biologist at the Northern Prairie Wildlife Research Center in Jamestown, North Dakota. "They are curious about a trap or bait station instead of being wary. That's why they were so vulnerable during the predator control programs."

Conversion of shortgrass and midgrass prairie into cultivated land displaced swift foxes from 60 to 90 percent of their historic range. However, they can expand their range if given the chance. "Swift foxes are adaptable, but what is replacing their habitat is key," Sovada says. "They won't go into tall grass. They want to see that coyote that's coming. In areas of short stature cropland they do reasonably well." Further studies are needed to fully comprehend how increasing conversion of dry-land crops to irrigated crops affects swift foxes.

Restoring long-missing swift foxes to the Fort Peck grassland involves several conservation groups and government agencies, including the Swift Fox Conservation Team. A cooperative group of two Canadian and 10 Great Plains state wildlife agencies, the team was formed in 1995 when the U.S. Fish and Wildlife Service (FWS) named the swift fox a candidate for listing under the federal Endangered Species Act. 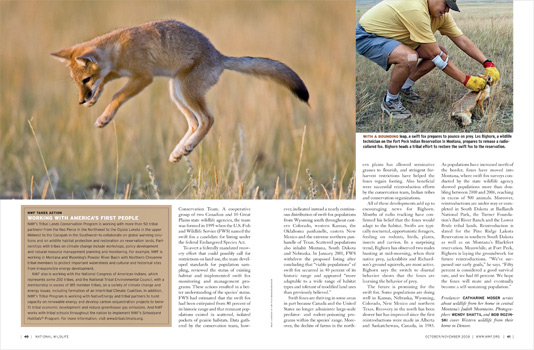 To avert a federally mandated recovery effort that could possibly call for restrictions on land use, the team developed standards for population sampling, reviewed the status of existing habitat and implemented swift fox monitoring and management programs. These actions resulted in a better understanding of the species' status. FWS had estimated that the swift fox had been extirpated from 80 percent of its historic range and that remnant populations existed in scattered, isolated pockets of prairie habitats. Data gathered by the conservation team, however, indicated instead a nearly continuous distribution of swift fox populations from Wyoming south throughout eastern Colorado, western Kansas, the Oklahoma panhandle, eastern New Mexico and the extreme northern panhandle of Texas. Scattered populations also inhabit Montana, South Dakota and Nebraska. In January 2001, FWS withdrew the proposed listing after concluding that "viable populations" of swift fox occurred in 40 percent of its historic range and appeared "more adaptable to a wide range of habitat types and tolerant of modified land uses than previously believed."

Swift foxes are thriving in some areas in part because Canada and the United States no longer administer large-scale predator- and rodent-poisoning programs within the species' range. Moreover, the decline of farms in the northern plains has allowed seminative grasses to flourish, and stringent fur-harvest restrictions have helped the foxes regain footing. Also beneficial were successful reintroduction efforts by the conservation team, Indian tribes and conservation organizations.

All of these developments add up to encouraging news for Bighorn. Months of radio tracking have confirmed his belief that the foxes would adapt to the habitat. Swifts are typically nocturnal, opportunistic foragers, feeding on rodents, birds, plants, insects and carrion. In a surprising trend, Bighorn has observed two males hunting at mid-morning, when their native prey, jackrabbits and Richardson's ground squirrels, are most active. Bighorn says the switch to diurnal behavior shows that the foxes are learning the behavior of prey.

The future is promising for the swift fox. Some populations are doing well in Kansas, Nebraska, Wyoming, Colorado, New Mexico and northern Texas. Recovery in the north has been slower but has improved since the first reintroductions were made in Alberta and Saskatchewan, Canada, in 1983. As populations have increased north of the border, foxes have moved into Montana, where swift fox surveys conducted by the state wildlife agency showed populations more than doubling between 2000 and 2006, reaching in excess of 500 animals. Moreover, reintroductions are under way or completed in South Dakota at Badlands National Park, the Turner Foundation's Bad River Ranch and the Lower Brule tribal lands. Reintroduction is slated for the Pine Ridge Lakota Reservation in southern South Dakota as well as on Montana's Blackfeet reservation. Meanwhile, at Fort Peck, Bighorn is laying the groundwork for future reintroductions. "We've surpassed our early goals," he says. "Fifty percent is considered a good survival rate, and we had 60 percent. We hope the foxes will mate and eventually become a self-sustaining population."

NWF's Tribal Lands Conservation Program is working with more than 50 tribal partners--from the Nez Perce in the Northwest to the Oglala Lakota in the upper Midwest to the Cocopah in the Southwest--to collaborate on global warming solutions and on wildlife habitat protection and restoration on reservation lands. Partnerships with tribes on climate change include workshops, policy development and natural resource management planning and monitoring. For example, NWF is working in Montana and Wyoming's Powder River Basin with Northern Cheyenne tribal members to protect important watersheds and cultural and historical sites from irresponsible energy development.

NWF also is working with the National Congress of American Indians, which represents some 250 tribes, and the National Tribal Environmental Council, with a membership in excess of 185 member tribes, on a variety of climate change and energy issues, including formation of an Intertribal Climate Coalition. In addition, NWF's Tribal Program is working with NativeEnergy and tribal partners to build capacity on renewable energy and develop carbon sequestration projects to benefit tribal economic development and reduce greenhouse gas emissions. And NWF works with tribal schools throughout the nation to implement NWF's Schoolyard Habitats® program. For more information, visit www.tribalclimate.org.