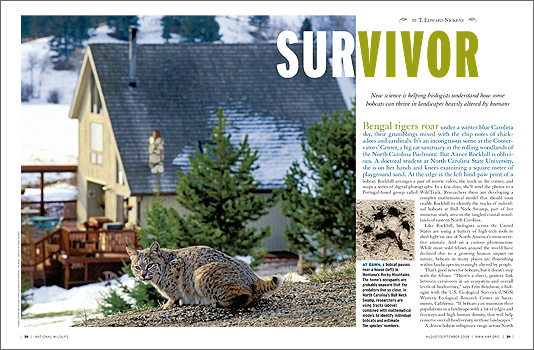 BENGAL TIGERS ROAR under a winter blue Carolina sky, their grumblings mixed with the chip notes of chickadees and cardinals. It’s an incongruous scene at the Conservators’ Center, a big cat sanctuary in the rolling woodlands of the North Carolina Piedmont. But Aimee Rockhill is oblivious. A doctoral student at North Carolina State University, she is on her hands and knees examining a square meter of playground sand. At the edge is the left hind paw print of a bobcat. Rockhill arranges a pair of metric rulers, the track in the corner, and snaps a series of digital photographs. In a few days, she’ll send the photos to a Portugal-based group called WildTrack. Researchers there are developing a complex mathematical model that should soon enable Rockhill to identify the tracks of individual bobcats at Bull Neck Swamp, part of her immense study area in the tangled coastal woodlands of eastern North Carolina.

Like Rockhill, biologists across the United States are using a battery of high-tech tools to shed light on one of North America’s most secretive animals. And on a curious phenomenon: While most wild felines around the world have declined due to a growing human impact on nature, bobcats in many places are flourishing within landscapes increasingly altered by people.

That’s good news for bobcats, but it doesn’t stop with the felines. “There’s a direct, positive link between carnivores in an ecosystem and overall levels of biodiversity,” says Erin Boydston, a biologist with the U.S. Geological Survey’s (USGS) Western Ecological Research Center in Sacramento, California. “If bobcats can maintain their populations in a landscape with a lot of edges and freeways and high human density, that will help conserve overall biodiversity in those landscapes.”

A dozen bobcat subspecies range across North America, where they have been reported in every U.S. state except Alaska, Hawaii and Delaware. These mid-sized carnivores tend to rely on a diet of rabbits and rodents, from cotton rats to voles, but a hungry bobcat will also eat birds, bird eggs, roadkill, insects, porcupines and persimmons. Bobcats are small—males average about 22 pounds and females about 6 pounds less—but what they lack in size, they make up for in spunk. The predators can kill and eat both white-tailed and mule deer. New Mexico biologist Kevin Hansen, author of the recent book Bobcat: Master of Survival, calls the cat “the pinnacle of carnivore evolution.”

On Rockhill’s 6,000-acre research site, bobcats share swamp forests, hardwoods, pines and marshes with black bears, river otters and feral hogs. The area is a microcosm of the changes facing huge swaths of the Atlantic Coastal Plain. Much of the property is open to timber harvest. Second-home developments press in from the borders. “We want to know how forestry practices affect bobcats, and whether they utilize these urbanizing areas or stay beyond the fringe,” says Rockhill. On a piece of property the size of Bull Neck, land managers could soften the impact of habitat change if they had good information about what bobcats need—and what they won’t tolerate.

New wildlife science is helping answer such questions. In the past, scientists monitoring bobcats at Bull Neck Swamp would drive dirt roads dragging an old box spring to smooth out soil for track surveys. But there was no way to know if two or more tracks were made by two or more bobcats, or the same bobcat visiting an area more than once. Being able to tell if a track was made from a known individual will help Rockhill turn population indexes into population estimates and figure out how individual animals respond to logging or other habitat disturbances. “For sure,” Rockhill laughs, “we’ve come a long way from dragging an old mattress around.”

High technology may be helping scientists understand bobcats, but the tools the cats use to survive when rubbing shoulders with humans have been around for eons. For starters, mid-sized carnivores in general have a wide-ranging palate; they can make do with both small and large prey. But in bobcats, large jaw muscles are attached to a bony ridge, called the sagittal crest, near the top of the skull. The feature gives the bobcat a very powerful bite when its jaws are open even at their widest, and helps extend the list of menu choices to animals much larger than itself. 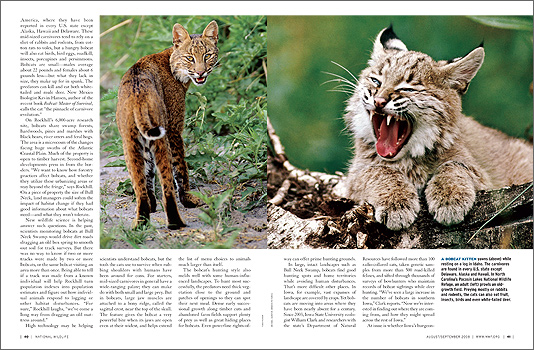 The bobcat’s hunting style also melds well with some human-influenced landscapes. To hunt most successfully, the predators need thick vegetation close to the ground and patches of openings so they can spot their next meal. Dense early successional growth along timber cuts and abandoned farm fields support plenty of prey as well as great hiding places for bobcats. Even powerline rights-of-way can offer prime hunting grounds.

In large, intact landscapes such as Bull Neck Swamp, bobcats find good hunting spots and home territories while avoiding human disturbances. That’s more difficult other places. In Iowa, for example, vast expanses of landscape are covered by crops. Yet bobcats are moving into areas where they have been nearly absent for a century. Since 2003, Iowa State University ecologist William Clark and researchers with the state’s Department of Natural Resources have followed more than 100 radio-collared cats, taken genetic samples from more than 500 road-killed felines, and sifted through thousands of surveys of bowhunters who maintain records of bobcat sightings while deer hunting. “We’ve seen a large increase in the number of bobcats in southern Iowa,” Clark reports. “Now we’re interested in finding out where they are coming from, and how they might spread across the rest of Iowa.”

At issue is whether Iowa’s burgeoning bobcat population is self-sustaining and growing from within, or mostly spillover from neighboring, more forested, states. “If our bobcat populations are closely related to those in other states,” says Clark, “that means dispersal is an important mechanism for maintaining or expanding the Iowa population.” That would make southern Iowa’s wooded river systems a critical factor in the long-term health of bobcat populations. 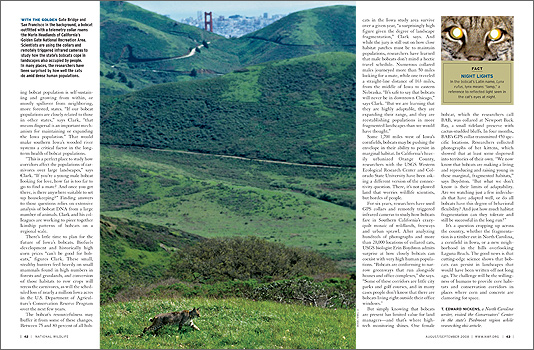 “This is a perfect place to study how corridors affect the populations of carnivores over large landscapes,” says Clark. “If you’re a young male bobcat looking for love, how far is too far to go to find a mate? And once you get there, is there anywhere suitable to set up housekeeping?” Finding answers to those questions relies on extensive analysis of bobcat DNA from a large number of animals. Clark and his colleagues are working to piece together kinship patterns of bobcats on a regional scale.

There’s little time to plan for the future of Iowa’s bobcats. Biofuels development and historically high corn prices “can’t be good for bobcats,” figures Clark. These small, stealthy hunters feed heavily on small mammals found in high numbers in forests and grasslands, and conversion of those habitats to row crops will stress the carnivores, as will the scheduled loss of nearly a million Iowa acres in the U.S. Department of Agriculture’s Conservation Reserve Program over the next few years.

The bobcat’s resourcefulness may buffer it from some of these changes. Between 75 and 80 percent of all bobcats in the Iowa study area survive over a given year, “a surprisingly high figure given the degree of landscape fragmentation,” Clark says. And while the jury is still out on how close habitat patches must be to maintain populations, researchers have learned that male bobcats don’t mind a hectic travel schedule. Numerous collared males journeyed more than 50 miles looking for a mate, while one traveled a straight-line distance of 163 miles, from the middle of Iowa to eastern Nebraska. “It’s safe to say that bobcats will never be in downtown Chicago,” says Clark. “But we are learning that they are highly adaptable, they are expanding their range, and they are reestablishing populations in more fragmented landscapes than we would have thought.”

Some 1,700 miles west of Iowa’s cornfields, bobcats may be pushing the envelope in their ability to persist in marginal habitat. In California’s heavily urbanized Orange County, researchers with the USGS Western Ecological Research Center and Colorado State University have been asking a different version of the connectivity question. There, it’s not plowed land that worries wildlife scientists, but hordes of people.

For six years, researchers have used GPS collars and remotely triggered infrared cameras to study how bobcats fare in Southern California’s crazy-quilt mosaic of wildlands, freeways and urban sprawl. After analyzing hundreds of photographs and more than 20,000 locations of collared cats, USGS biologist Erin Boydston admits surprise at how closely bobcats can coexist with very high human populations. “Bobcats are conforming to narrow greenways that run alongside houses and office complexes,” she says. “Some of these corridors are little city parks and golf courses, and in many cases people don’t know that there are bobcats living right outside their office windows.”

But simply knowing that bobcats are present has limited value for land managers—and that’s where high-tech monitoring shines. One female bobcat, which the researchers call BAB, was collared at Newport Back Bay, a small tideland preserve with cactus-studded bluffs. In four months, BAB’s GPS collar transmitted 450 specific locations. Researchers collected photographs of her kittens, which showed that at least some dispersed into territories of their own. “We now know that bobcats are making a living and reproducing and raising young in these marginal, fragmented habitats,” says Boydston. “But what we don’t know is their limits of adaptability. Are we watching just a few individuals that have adapted well, or do all bobcats have this degree of behavioral flexibility? And just how much habitat fragmentation can they tolerate and still be successful in the long run?”

It’s a question cropping up across the country, whether the fragmentation is a timber cut in North Carolina, a cornfield in Iowa, or a new neighborhood in the hills overlooking Laguna Beach. The good news is that cutting-edge science shows that bobcats can persist in landscapes that would have been written off not long ago. The challenge will be the willingness of humans to provide core habitats and conservation corridors in places where corn and concrete are clamoring for space.

T. Edward Nickens, a North Carolina writer, visited the Conservators’ Center in the state’s Piedmont region while researching this article.


Web Exclusive
Lynx Around the World

The bobcat (Lynx rufus) is related to three other lynx species: the Canada lynx (Lynx Canadensis), Eurasian lynx (Lynx lynx) and Iberian, or Spanish, lynx (Lynx pardinus). Ranging across Canada into Alaska and some parts of the continental United States (including Montana, Idaho, Washington and, rarely, Utah, Minnesota and New England), the Canada lynx is listed as threatened under the U.S. Endangered Species Act. The Eurasian lynx roams many European and Siberian forests; though extirpated in some countries, the cat has made a comeback in others and is classified as “near threatened” by the International Union for Conservation of Nature (IUCN). IUCN classifies the Iberian lynx as “critically endangered.” Perhaps the most endangered feline on Earth, this species is found nowhere but the Iberian peninsula of Southern Europe. To read about ongoing efforts to save the rare cat, see the National Wildlife article “Can Spain Save the World's Most Endangered Cat?”—Laura Tangley