Tasmania's Devil of a Problem 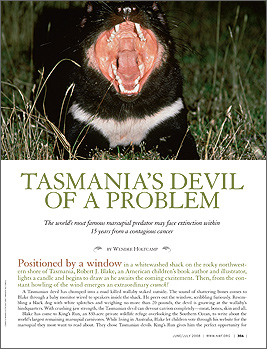 POSITIONED BY A WINDOW in a whitewashed shack on the rocky northwestern shore of Tasmania, Robert J. Blake, an American children's book author and illustrator, lights a candle and begins to draw as he awaits the coming excitement. Then, from the constant howling of the wind emerges an extraordinary crunch!

A Tasmanian devil has chomped into a road-killed wallaby staked outside. The sound of shattering bones comes to Blake through a baby monitor wired to speakers inside the shack. He peers out the window, scribbling furiously. Resembling a black dog with white splotches and weighing no more than 20 pounds, the devil is gnawing at the wallaby's hindquarters. With crushing jaw strength, the Tasmanian devil can devour carrion completely--meat, bones, skin and all.

Blake has come to King's Run, an 830-acre private wildlife refuge overlooking the Southern Ocean, to write about the world's largest remaining marsupial carnivores. While living in Australia, Blake let children vote through his website for the marsupial they most want to read about. They chose Tasmanian devils. King's Run gives him the perfect opportunity for observing the animals. Started in 1999 when rancher and conservationist Geoff King, at the urging of state biologist Nick Mooney, turned a long-time family cattle property into a nature preserve, King's Run may be one of the last places in the world to see healthy Tasmanian devils in the wild. King collects roadkills daily, freezes them and stakes them outside the shack when tourists come for a look.

During the past 10 years, devil facial tumor disease--one of only three contagious cancers known in the world--has devastated the species, which is found only in Tasmania, an Australian island-state 125 miles off the continent's southeast tip. The disease produces tumors that deform the faces of infected devils and metastasize throughout their bodies. Infection is helped in part by the devils' pugnaciousness--when they fight, they spread cancer cells. 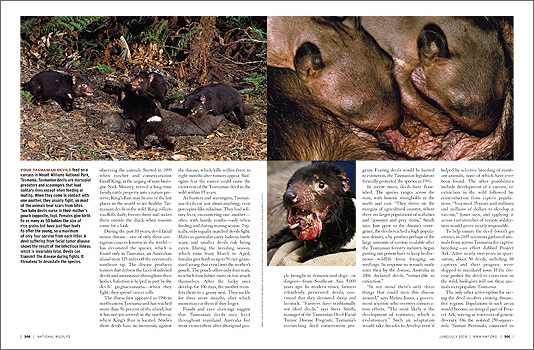 The illness first appeared in 1996 in northeastern Tasmania and has reached more than 56 percent of the island, but it has not yet arrived in the northwest, where King's Run is located. Studies show devils have no immunity against the disease, which kills within three to eight months after tumors appear. Biologists fear the cancer could cause the extinction of the Tasmanian devil in the wild within 15 years.

As hunters and scavengers, Tasmanian devils eat just about anything, even porcupine-like echidnas. They lead solitary lives, encountering one another--often with hostile results--only when feeding and during mating season. Typically, only equally matched devils fight. Males in particular carry hideous battle scars, and smaller devils risk being eaten. During the breeding season, which runs from March to April, females give birth to up to 50 rice-grain-sized young that crawl into the mother's pouch. The pouch offers only four teats, to which four babies more or less attach themselves. After the lucky ones develop for 100 days, the mother transfers them to a grassy nest. They suckle for three more months, after which mom may eat them if they linger. 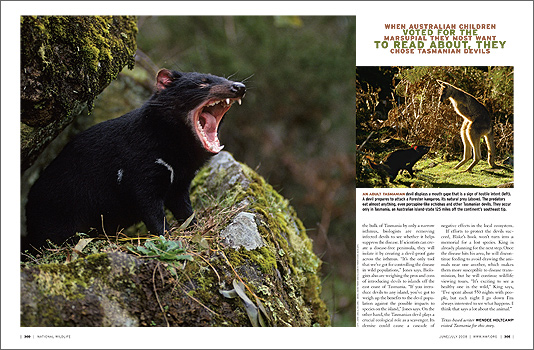 In recent times, devils have flourished. The species ranges across the state, with historic strongholds in the north and east. "They thrive on the margins of agricultural country, where there are larger populations of wallabies and 'possums and prey items," Smith says. Just prior to the disease's emergence, the devils reached a high population density, a by-product perhaps of the large amounts of carrion available after the Tasmanian forestry industry began putting out poison baits to keep herbivorous wildlife from foraging on seedlings. In response to inroads made since then by the disease, Australia in 2006 declared devils "vulnerable to extinction."

"In my mind there's only three things that could turn this disease around," says Menna Jones, a government scientist who oversees conservation efforts. "The most likely is the development of resistance, which is evolutionary." Such an adaptation would take decades to develop even if helped by selective breeding of resistant animals, none of which have ever been found. The other possibilities include development of a vaccine, or extinction in the wild followed by reintroduction from captive populations. "You need 25 years and millions and millions of dollars to develop a vaccine," Jones says, and applying it across vast stretches of remote wilderness would prove nearly impossible.

To help ensure the devil doesn't go extinct, in 2005 scientists gathered animals from across Tasmania for captive breeding--an effort dubbed Project Ark. After nearly two years in quarantine, about 50 devils, including 30 captives and their progeny, were shipped to mainland zoos. If the disease pushes the devil to extinction in the wild, biologists will use these animals to repopulate Tasmania.

The only other active option for saving the devil involves creating disease-free regions. Populations in such areas would become an integral part of Project Ark, serving as reservoirs of genetic diversity. On the isolated 250-square-mile Tasman Peninsula, connected to the bulk of Tasmania by only a narrow isthmus, biologists are removing infected devils to see whether it helps suppress the disease. If scientists can create a disease-free peninsula, they will isolate it by creating a devil-proof gate across the isthmus. "It's the only tool that we've got for controlling the disease in wild populations," Jones says. Biologists also are weighing the pros and cons of introducing devils to islands off the east coast of Tasmania. "If you introduce devils to any island, you've got to weigh up the benefits to the devil population against the possible impacts to species on the island," Jones says. On the other hand, the Tasmanian devil plays a crucial ecological role as a scavenger. Its demise could cause a cascade of negative effects in the local ecosystem.

If efforts to protect the devils succeed, Blake's book won't turn into a memorial for a lost species. King is already planning for the next step. Once the disease hits his area, he will discontinue feeding to avoid drawing the animals near one another, which makes them more susceptible to disease transmission, but he will continue wildlife viewing tours. "It's exciting to see a healthy one in the wild," King says, "I've spent about 550 nights with people, but each night I go down I'm always interested to see what happens. I think that says a lot about the animal."