Why Is This Crocodile Smiling

After being hunted to the edge of extinction, the American crocodile's U.S. population has rebounded to its highest level in more than a century 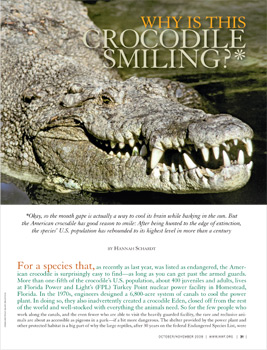 FOR A SPECIES that, as recently as last year, was listed as endangered, the American crocodile is surprisingly easy to find--as long as you can get past the armed guards. More than one-fifth of the crocodile's U.S. population, about 400 juveniles and adults, lives at Florida Power and Light's (FPL) Turkey Point nuclear power facility in Homestead, Florida. In the 1970s, engineers designed a 6,800-acre system of canals to cool the power plant. In doing so, they also inadvertently created a crocodile Eden, closed off from the rest of the world and well-stocked with everything the animals need. So for the few people who work along the canals, and the even fewer who are able to visit the heavily guarded facility, the rare and reclusive animals are about as accessible as pigeons in a park--if a bit more dangerous. The shelter provided by the power plant and other protected habitat is a big part of why the large reptiles, after 30 years on the federal Endangered Species List, were reclassified in 2007 as "threatened."

"They are here for security and food," says Joe Wasilewski, a wildlife biologist who has carved out a niche for himself as a kind of itinerant crocodile researcher and advocate. For nearly two decades, his home base has been Turkey Point, where he spends a good part of the year tracking the crocs that bask, feed, and breed in the water. On a balmy morning last February, Wasilewski slowly steered his pickup down the gravel roads that run along the canals, pointing out crocodiles. Their rough backs and, sometimes, the tops of their heads were plainly visible in the water. "Looks like it's all females today," he says, clearly disappointed that the dominant male that claims this canal--and its females--was nowhere to be seen. To a visitor, though, the wildlife was impressive. In addition to crocodiles, there were wood storks, pelicans--even a mother manatee nursing her young. The nuclear plant is closed to the general public, and human visitors must undergo a background check and pass through security. This means that the reptilian residents are largely left alone, except for Wasilewski's regular head counts.

The canal system is a croc smorgasbord of fish, crab, birds--even, as Wasilewski discovered a few years ago, smaller crocodiles. He and his colleagues inject microchips into hatchlings in order to trace their movements, and "we have found six or eight microchips in the stomachs of bigger crocodiles," he says. Along with ample food and security, the canals boast deep water and high, dry berms--ideal places to court, mate and incubate eggs.

Good news can be hard to come by in the world of endangered species, but the recent history of the only crocodile native to the United States is, by most accounts, a happy one. In announcing the reptile's downlisting last year, Sam Hamilton, the U.S. Fish and Wildlife Service's (FWS) Southeast regional director, noted that "crocodiles were a part of Florida's history for hundreds of years until human activities such as urban development, agricultural conversion and overhunting decimated their populations." In 1975, when the species was listed as endangered, there were only about 200 individual crocodiles remaining in Florida. In the 30 years since, the state made what Hamilton calls "great strides" in protecting crocs, mostly by eliminating hunting and preserving habitat--or, as in the case of Turkey Point, creating new habitat. By early last year, when the American crocodile was reclassified as threatened, there were an estimated 2,000 of the reptiles living in southern Florida--more than at any time since Europeans colonized the Americas. According to FWS, 95 percent of the remaining crocodile habitat in southern Florida has been acquired by federal, state and county agencies. 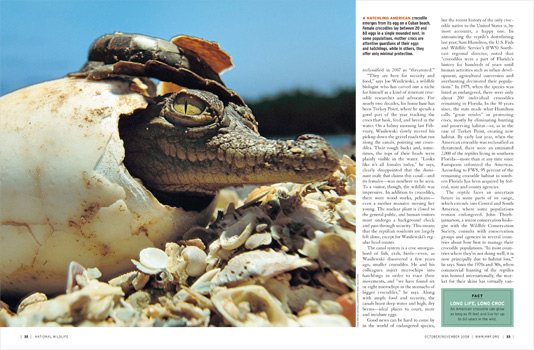 The reptile faces an uncertain future in some parts of its range, which extends into Central and South America, where some populations remain endangered. John Thorbjarnarson, a senior conservation biologist with the Wildlife Conservation Society, consults with conservation groups and agencies in several countries about how best to manage their crocodile populations. "In most countries where they're not doing well, it is now principally due to habitat loss," he says. Since the 1970s and '80s, when commercial hunting of the reptiles was banned internationally, the market for their skins has virtually vanished. But during the same period, human demand for their habitat has only increased. In many parts of the Americas, the mangrove swamps that host the crocodiles have been drained for coastal residential and commercial development or altered to accommodate aquaculture.

In southern Florida, the reptile is often confused with its far more common cousin, the American alligator, which it closely resembles. The croc can be distinguished by its slightly narrower snout and its jaw, which leaves a tooth exposed when the mouth is closed. Wasilewski believes that the animals' physical similarity is to blame for the public's reluctance to embrace the crocodile. Florida's gators have become so numerous that nuisance animals--those that approach or even attack humans and domesticated animals--are often in the news. "But there is no record of an American crocodile ever attacking a human" in the United States, says Wasilewski.

Dangerous or not to humans, mother crocodiles are known to be tender to their offspring, guarding the nests during the three months of incubation and carefully carrying the hatchlings in their mouths from nest to water. Crocodile courtship is perhaps the most complex among all reptiles: Males initiate the courtship with a rapid series of head slaps. An interested female responds by lifting her snout and arching her tail. Once the pair decides to mate, the two crocodiles rub snouts, ride each other and blow bubbles. After copulation, the two part ways and the female begins to prepare the nest without further assistance from the male. 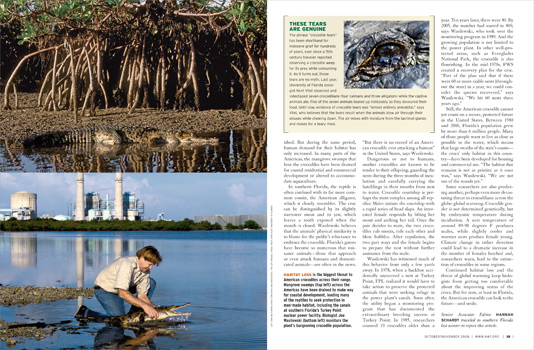 Wasilewski has witnessed much of this behavior from only a few yards away. In 1978, when a backhoe accidentally uncovered a nest at Turkey Point, FPL realized it would have to take action to preserve the protected animals that were seeking refuge in the power plant's canals. Soon after, the utility began a monitoring program that has documented the extraordinary breeding success at Turkey Point: In 1985, researchers counted 19 crocodiles older than a year. Ten years later, there were 40. By 2005, the number had soared to 400, says Wasilewski, who took over the monitoring program in 1989. And the growing population is not limited to the power plant. In other well-protected areas, such as Everglades National Park, the crocodile is also flourishing. In the mid-1970s, FWS created a recovery plan for the croc. "Part of the plan said that if there were 60 or more viable nests (throughout the state) in a year, we could consider the species recovered," says Wasilewski. "We hit 60 nests three years ago."

Still, the American crocodile cannot yet count on a secure, protected future in the United States. Between 1980 and 2000, Florida's population grew by more than 6 million people. Many of those people want to live as close as possible to the water, which means that large swaths of the state's coasts--the crocs' only habitat in this country--have been developed for housing and commercial use. "The habitat that remains is not as pristine as it once was," says Wasilewski. "We are not out of the woods yet."

Some researchers are also predicting another, perhaps even more devastating threat to crocodilians across the globe: global warming. Crocodile gender is not determined genetically, but by embryonic temperature during incubation. A nest temperature of around 89-90 degrees F produces males, while slightly cooler and warmer nests produce female young. Climate change in either direction could lead to a dramatic increase in the number of females hatched and, researchers warn, lead to the extinction of crocodiles in some regions.

Continued habitat loss and the threat of global warming keep biologists from getting too comfortable about the improving status of the crocs. But for now, at least in Florida, the American crocodile can look to the future--and smile.

These Tears Are Genuine

The phrase "crocodile tears" has been shorthand for insincere grief for hundreds of years, ever since a 15th century traveler reported observing a crocodile weep for its prey while consuming it. As it turns out, those tears are no myth. Last year, University of Florida zoologist Kent Vliet observed and videotaped seven crocodilians--four caimans and three alligators--while the captive animals ate. Five of the seven animals teared up noticeably as they devoured their food. Until now, evidence of crocodile tears was "almost entirely anecdotal," says Vliet, who believes that the tears result when the animals blow air through their sinuses while chowing down. The air mixes with moisture from the lacrimal glands and makes for a teary meal.


Baby Crocs Speak From Within Eggs

Scientists who study crocodiles have long noted the calls, perfectly audible to humans, emitted from Nile crocodile eggs soon before hatching. But until now, those calls had never been definitively deciphered by humans. New research indicates that the hatchlings' calls--which researchers say sound like "Umph! Umph!"--appear to alert their nest mates that it is time to hatch. Croc mothers, who bury their nests as soon as the eggs are laid, are also spurred into action by the sounds; the calls signal to the mother that she should begin digging up her young.

French researchers made the discovery by dividing crocodile eggs that were due to hatch within 10 days into three groups. One of those groups was played recordings of pre-hatching calls, one was played recordings of noise, and the last was left in silence until they hatched. The eggs played the pre-hatch sounds often answered back, they report. And all of the eggs in the pre-hatch group hatched during the playback or within 10 minutes of it. Only once did the eggs hearing noise hatch, and the rest hatched at least five hours after the last test.

In order to test the mothers' responses to the calls, the researchers removed the eggs from the nest within a few days of the laying. In spite of this, the females continued to guard the nest. At the end of the incubation period, the researchers hid a loudspeaker underground near the empty nest and played pre-hatching calls interspersed with noise to ten mothers. The adults more often turned their heads or moved after egg sounds than after noise, they showed, and eight of the mothers responded to the recorded calls by digging.--Hannah Schardt