Solving the Mystery of a Migratory Marvel

With its nonstop flight over the entire length of the Pacific Ocean, the bar-tailed godwit is the unrivaled champion of long-distance avian travel 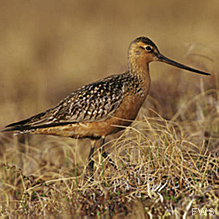 WHEN ASKED TO describe the migratory feats of the bar-tailed godwit, Phil Battley does so with bemused awe. “Here’s how I like to think of it,” says the ecologist at New Zealand’s Massey University. “Imagine that you first hear about the southward flight of bar-tailed godwits as they take off on a Sunday night in early fall. ‘Amazing,’ you might think. ‘They’re flying all the way from Alaska to New Zealand!’ Then you go to bed.”

By the time you go to sleep the following Sunday night, he says, “the godwits are still flying.” The birds finally reach the end of their nonstop journey several hours later. “An incredible achievement,” beams Battley.

Bar-tailed godwits are widely distributed, with four subspecies that breed from Norway to western Alaska and numbering in excess of a million. Of those, however, the 100,000 or so birds that nest on Alaska’s North Slope and in the Yukon Delta have attracted the most attention—and for good reason. Not long ago, Battley and his colleagues confirmed that these godwits make the longest nonstop flight of any bird—a 7,300-mile trek from the 49th state across the length of the Pacific Ocean to New Zealand and Australia.

Among shorebirds, bar-tailed godwits are comparatively large—females can weigh more than a pound—and have long upswept bills, which they use to probe the mud for invertebrates. During breeding season in Alaska, they nest in small cups on the open tundra, and once their chicks can fly—after about four weeks—both young and adults gather in huge flocks at staging areas along the coast. There, they feed heavily for several days before migrating.

For a long time, scientists could not explain how the godwits turned up a few days later in New Zealand and southeastern Australia. “You can find a paper trail going back to the mid-20th century of people who thought the godwits were maybe crossing the Pacific,” says Bob Gill, the head of shorebird research for the U.S. Geological Survey in Alaska who collaborates with Battley. “That they might make the flight nonstop wasn’t considered until the last decade or so.” Simply put, experts had a tough time imagining how a bird could stay in the air so long.

In 2005, however, Gill and his colleagues began piecing together some circumstantial evidence to support the notion. Among other things, they noted that when the godwits are known to be flying south, the birds are rarely seen over either the Asian mainland or any Pacific islands. They also noted that a couple of weeks before leaving Alaska, each godwit gorges on clams and worms, so much so that its dermis bulges with the highest fat content recorded in birds. At the same time, some of the bird’s internal organs shrivel up. By the time a godwit takes off, it is little more than brains, fat and flight muscle.

Then there is the departure itself. Godwits apparently watch the winds. Storms generate off the Japanese or Russian coasts, Gill says, and then track east across the Bering Sea. Off the Alaskan coast, the storms run into what is known as the Aleutian Low—an area of low pressure that is a sort of finishing school for storms, gathering the hodgepodge of wind and rain and whipping it into howling gales that rampage down the North American coast. Godwits wait for storms of a particular strength to pass, and then use the tailwinds to help sling them south.

“These birds, they know what they’re doing,” Gill says. “All we did was build upon the suppositions of other researchers. After that, it was just a question of waiting for the technology to miniaturize.”

By 2007, satellite tags were small enough that scientists could harness them to the backs of birds, or implant them without causing undue stress. Gill and Battley tagged 16 godwits in February, a month or so before the birds were due to fly north from New Zealand.

“The manufacturer told us that the batteries would last for only so long,” says Gill, and indeed, most of the transmitters died at their appointed times. But one, he says, kept “ticking and ticking.” Attached to a female godwit called E7, it sent signals from New Zealand all the way to Alaska. Then it kept ticking until, months later, E7 turned around and flew 7,300 miles back to New Zealand in a nonstop, eight-day effort.

Godwits may follow their own unique route south, but when they return north in the spring, a nonstop flight is no longer practical. Because the birds need extra energy to breed once they reach their nesting grounds, they make a few stops along the way to feed. In doing so, they join about three million other birds that follow the East Asian-Australasian Flyway. From its southern tip in New Zealand, the flyway crosses 22 countries before ending in the Russian and Alaskan Arctic regions.

Unfortunately, the route also is where godwits and many other birds run into trouble. The problem: Many of the wetlands where the shorebirds refuel are drying up or being drained. The most crucial of these are found in the Yellow Sea region of China and South Korea, where some 600 million people have their own needs and priorities. In Saemangeum, a complex of estuaries and bays on the Korean peninsula that was long considered the most important stop on the flyway, a 20.5-mile dam was completed in 2006. The massive project destroyed much of the estuary and eventually will convert more than 150 square miles of former mudflat into open land and a reservoir—one of the world’s largest development efforts. In the two years since, researchers have noted an alarming shorebird decline along the flyway.

“By the time they reach the Yellow Sea, some of the birds from Australia and New Zealand have flown several thousand kilometers without stopping,” says Chris Hassell, a researcher with the Global Flyway Network in Australia. “The South Korean government said that the flyway is like a motorway: If you get to an empty station, you just move on to the next one. But follow that analogy: What if you run out of gas on the way? If you’re a bird, you’re out of luck.”

According to researchers, surveys taken after the estuary was drained found that more than 100,000 birds had “gone missing,” including nearly 75,000 great knots, another long-distance migrant. Researchers do not know if the birds went somewhere else or simply died. Hassell thinks that some of them may fly to North Korea, where, he says, satellite images on Google Earth show plenty of good habitat. But no one knows for sure. And while the godwits do not yet appear to be affected by the wetland losses, experts are concerned that the problem may eventually manifest in reduced breeding success for the birds.

Under the U.S. Shorebird Conservation Plan, which was created in 2000, the U.S. Fish and Wildlife Service now lists the bar-tailed godwit as a species of high concern, a designation based on its restricted U.S. breeding distribution and other factors that help ensure the bird’s habitat in this country will be safeguarded. But protecting the species throughout its entire range will require an international effort. “We need to do more,” says Hassell, “to win the hearts and minds of people who live wherever the godwits fly.”

Seattle writer Eric Wagner spent most of 2007 in New Zealand, where he saw “a lot of tired bar-tailed godwits.”