Are massive swarms of jellyfish a symptom of severe decline of the world’s marine ecosystems? 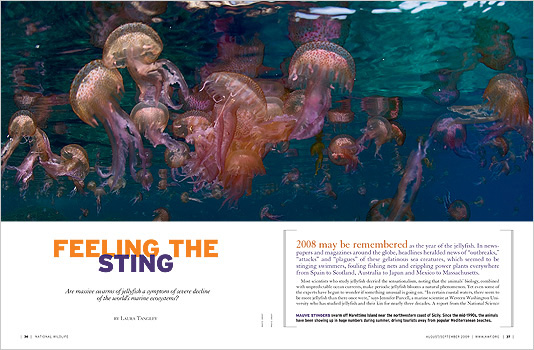 2008 MAY BE REMEMBERED as the year of the jellyfish. In newspapers and magazines around the globe, headlines heralded news of “outbreaks,” “attacks” and “plagues” of these gelatinous sea creatures, which seemed to be stinging swimmers, fouling fishing nets and crippling power plants everywhere from Spain to Scotland, Australia to Japan and Mexico to Massachusetts.

Most scientists who study jellyfish decried the sensationalism, noting that the animals’ biology, combined with unpredictable ocean currents, make periodic jellyfish blooms a natural phenomenon. Yet even some of the experts have begun to wonder if something unusual is going on. “In certain coastal waters, there seem to be more jellyfish than there once were,” says Jennifer Purcell, a marine scientist at Western Washington University who has studied jellyfish and their kin for nearly three decades. A report from the National Science Foundation (NSF), released in December 2008, goes further. “In recent years, massive blooms of stinging jellyfish and jellyfish-like creatures have overrun some of the world’s most important fisheries and tourist destinations,” states the document. “Worldwide reports of massive jellyfish blooms are triggering speculation that jellyfish swarms are increasing because of human activities.”

For now, most scientists say that view remains “speculation” at best. “Because fisheries researchers traditionally considered jellyfish as by-catch, and not really important to ecosystems, the animals are poorly studied,” says Purcell. “We have very few long-term records of jellyfish populations.”

Swimming the planet’s seas for more than 500 million years, “true” jellyfish are invertebrates in the phylum Cnidaria. Scientists recently have begun to realize that the animals, along with a dizzying diversity of their gelatinous cousins, play critical roles in ocean ecosystems. As highly efficient predators, jellyfish eat vast quantities of fish eggs and larvae as well as zooplankton fed upon by adult fish. As prey, gelatinous creatures sustain a variety of species, including seabirds, salmon, sea turtles and other jellyfish. “If you don’t understand the ecology of jellyfish, you’re missing an important component of marine ecosystems,” says Jack Costello, a marine biologist at Providence College in Rhode Island. Of some 1,000 known species of jellyfish, he adds, only a handful have ever caused problems for people. 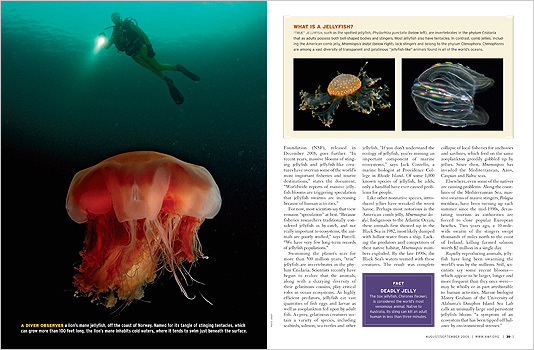 Like other nonnative species, introduced jellies have wreaked the worst havoc. Perhaps most notorious is the American comb jelly, Mnemiopsis leidyi. Indigenous to the Atlantic Ocean, these animals first showed up in the Black Sea in 1982, most likely dumped with ballast water from a ship. Lacking the predators and competitors of their native habitat, Mnemiopsis numbers exploded. By the late 1990s, the Black Sea’s waters teemed with these creatures. The result was complete collapse of local fisheries for anchovies and sardines, which feed on the same zooplankton greedily gobbled up by jellies. Since then, Mnemiopsis has invaded the Mediterranean, Azov, Caspian and Baltic seas.

Elsewhere, even some of the natives are causing problems. Along the coastlines of the Mediterranean Sea, massive swarms of mauve stingers, Pelagia noctiluca, have been turning up each summer since the mid-1990s, devastating tourism as authorities are forced to close popular European beaches. Two years ago, a 10-mile-wide swarm of the stingers swept thousands of miles north to the coast of Ireland, killing farmed salmon worth $2 million in a single day.

Rapidly reproducing animals, jellyfish have long been swarming the world’s seas by the millions. Still, scientists say some recent blooms—which appear to be larger, longer and more frequent than they once were—may be wholly or in part attributable to human activities. Marine biologist Monty Graham of the University of Alabama’s Dauphin Island Sea Lab calls an unusually large and persistent jellyfish bloom “a symptom of an ecosystem that has been tipped off balance by environmental stresses.” 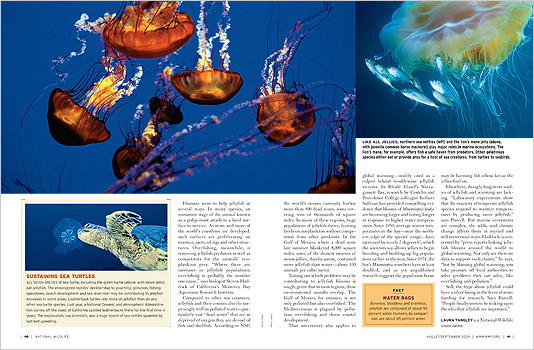 Humans seem to help jellyfish in several ways. In many species, an immature stage of the animal known as a polyp must attach to a hard surface to survive. As more and more of the world’s coastlines are developed, such surfaces are proliferating on marinas, piers, oil rigs and other structures. Overfishing, meanwhile, is removing jellyfish predators as well as competitors for the animals’ zooplankton prey. “Where there are increases in jellyfish populations, overfishing is probably the number one cause,” says biologist Steven Haddock of California’s Monterey Bay Aquarium Research Institute.

Compared to other sea creatures, jellyfish and their cousins also do surprisingly well in polluted water—particularly vast “dead zones” that are so deprived of oxygen they are devoid of fish and shellfish. According to NSF, the world’s oceans currently harbor more than 400 dead zones, some covering tens of thousands of square miles. In many of these regions, huge populations of jellyfish thrive, feasting freely on zooplankton without competition from other predators. In the Gulf of Mexico, where a dead zone last summer blanketed 8,000 square miles, some of the densest swarms of moon jellies, Aurelia aurita, contained more jellyfish than water—about 100 animals per cubic meter.

Teasing out which problems may be contributing to jellyfish blooms is tough, given that in most regions, these environmental assaults overlap. The Gulf of Mexico, for instance, is not only polluted but also overfished. The Mediterranean is plagued by pollution, overfishing and dense coastal development.

That uncertainty also applies to global warming—widely cited as a culprit behind troublesome jellyfish swarms. In Rhode Island’s Narragansett Bay, research by Costello and Providence College colleague Barbara Sullivan has provided compelling evidence that blooms of Mnemiopsis leidyi are becoming larger and lasting longer in response to higher water temperatures. Since 1950, average winter temperatures in the bay—near the northern edge of the species’ range—have increased by nearly 2 degrees C, which the scientists say allows jellies to begin breeding and building up big populations earlier in the year. Since 1971, the bay’s Mnemiopsis numbers have at least doubled, and as yet unpublished research suggests the population boom may be harming fish whose larvae the jellies feed on.

Elsewhere, though, long-term studies of jellyfish and warming are lacking. “Laboratory experiments show that the majority of temperate jellyfish species respond to warmer temperatures by producing more jellyfish,” says Purcell. But marine ecosystems are complex, she adds, and climate change affects them in myriad and still mysterious ways. Haddock is concerned by “press reports linking jellyfish blooms around the world to global warming. Not only are there no data to support such claims,” he says, “but by blaming global warming, you take pressure off local authorities to solve problems they can solve, like overfishing and pollution.”

Still, the hype about jellyfish could have a silver lining in the form of more funding for research. Says Purcell: “People finally seem to be waking up to the idea that jellyfish are important.”

What Is a Jellyfish?

“True” jellyfish, such as the spotted jellyfish, Phyllorhiza punctata, are invertebrates in the phylum Cnidaria that as adults possess both bell-shaped bodies and stingers. Most jellyfish also have tentacles. In contrast, comb jellies, including the American comb jelly, Mnemiopsis leidyi, lack stingers and belong to the phylum Ctenophora. Ctenophores are among a vast diversity of transparent and gelatinous “jellyfish-like” animals found in all of the world’s oceans.

All seven species of sea turtle eat jellyfish. The endangered reptiles’ decline—due to poaching, pollution, fishing operations, beach development and sea level rise—may be contributing to jellyfish increases in some areas. Leatherback turtles rely more on jellyfish than do any other sea turtle species. Last year, a National Oceanic and Atmospheric Administration survey off the coast of California spotted leatherbacks there for the first time in years. The explanation, say scientists, was a huge bloom of sea nettles spawned by nutrient upwelling.