Fighting for the Firefox

Nepal’s red panda is getting help from a small group of local forest guardians, but the highly endangered mammal still faces a troubled future as its habitat is lost to deforestation 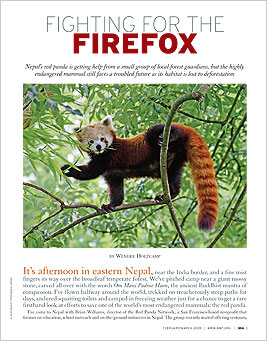 IT’S AFTERNOON in eastern Nepal, near the India border, and a fine mist fingers its way over the broadleaf temperate forest. We’ve pitched camp near a giant mossy stone, carved all over with the words Om Mani Padme Hum, the ancient Buddhist mantra of compassion. I’ve flown halfway around the world, trekked on treacherously steep paths for days, endured squatting toilets and camped in freezing weather just for a chance to get a rare firsthand look at efforts to save one of the world’s most endangered mammals: the red panda.

I’ve come to Nepal with Brian Williams, director of the Red Panda Network, a San Francisco-based nonprofit that focuses on education, school outreach and on-the-ground initiatives in Nepal. The group recently started offering ecotours, giving travelers like me a chance to see red pandas in the wild.

The group’s ultimate aim is to aid the species’ recovery by convincing local Nepalis of the benefits of red panda conservation. The network is spearheading a community-based conservation initiative, hiring and training a dozen local Nepalis to become forest guardians, watchdogs of the red panda and its habitat. In a country ravaged for the past ten years by a bloody civil war, and where most people still heat their homes by burning wood stripped from the red panda’s habitat, this is no easy feat.

Some 400 red pandas survive in Nepal, and as many as 2,500 mature individuals live throughout their entire range—a band of broadleaf temperate forest between 7,600 and 13,500 feet above sea level in Central Asia, from Nepal in the west to China in the east, including India, Myanmar and Bhutan. Red pandas face habitat loss due to deforestation, the main threat to their long-term survival. Because eastern Nepal sees far fewer tourists than other parts of the country, ecotourism has enormous potential to help the animal, its forest ecosystems and the local people.

Red pandas face other threats to their survival. Dogs easily kill the slow-moving animals, and in some areas poachers hunt them for their pelts or sell them on the black market. Much of the land in eastern Nepal is already deforested, and global warming has hit the Himalayas hard. “Twenty years ago the areas where red pandas live were only seasonally grazed. Snow was on the ground for almost three months a year,” says Williams. “With the advent of global warming, these areas have become filled with snow only several weeks a year. Now people can graze their cattle for the majority of the year, and this creates more intense pressure on red panda habitat.”

Back at the camp, Nepali Sange Sherpa runs up, talking excitedly. He and a couple other forest guardians have been searching the surrounding forests since we arrived and have spotted two red pandas. We grab our cameras and run up the path, panting in the thin air.

The guardians lead us to a raccoon-sized animal with russet fur and a striped tail crouching on a tree branch, peering at the crowd that has gathered. Its small, round eyes are close together, making it look like a cub. It walks down the branch and stops, looking around then poking its head through the leaves. Most wild animals run away when people come near, but red pandas’ bamboo diet slows their metabolism, resulting in low energy levels. Because of their slothfulness, locals call them “stupid” and “lazy.” 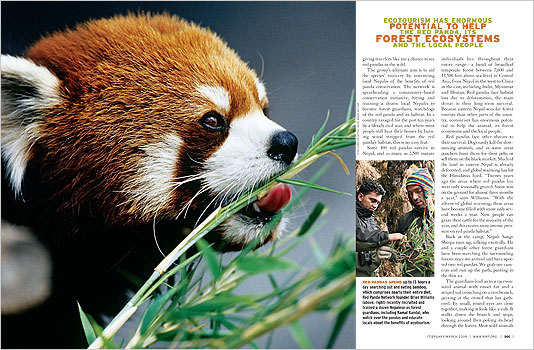 Scientists know very little about their behavior in the wild. Indeed, few people have ever seen them in their native haunts. What is known is that red pandas live mostly solitary lives, spending much time eating bamboo and sleeping. They seek mates from December to February, and the female gives birth to up to four cubs around four months later. Cubs stay with their mother until she gives birth again the following year, and then they venture out on their own.

Williams likes to say red pandas are the original pandas, but they don’t get the credit. In 1821, British naturalist Thomas Hardwicke became the first Westerner to observe them, noting their local name, poonya, which was later Anglicized to panda. It wasn’t until 1869—when Western naturalists discovered a charming black and white bear that also ate bamboo—that the animal nicknamed the “firefox” was renamed the “lesser panda” or the more dignified “red panda.”

Scientists have struggled over where the red panda fits in the evolutionary tree of life. It walks with a bearlike gait, and like the giant panda, has a specialized “thumb”—really a modified wrist bone—that helps it to handle bamboo. Only through genetic testing did scientists discover that the two pandas are not close relatives at all. Rather, they became bamboo specialists through convergent evolution. Red pandas, it turns out, have no close living relatives, but scientists now believe they are distantly related to raccoons and coatamundis.

When Williams first came to Nepal in 1996 as a Peace Corps volunteer, he taught math, not conservation, until an encounter that changed the direction of his life. “My friend and I were walking from the village where I taught,” he recounts. “It was perfectly clear, and you could see from Mount Kanchenjunga to Mount Everest. Out of nowhere comes a tourist running at us in the snow. ‘Have you seen anybody today? Somebody killed a red panda!’ he said. And I thought, ‘What the hell is a red panda? It must be something important if this guy is so excited about it being killed.’” 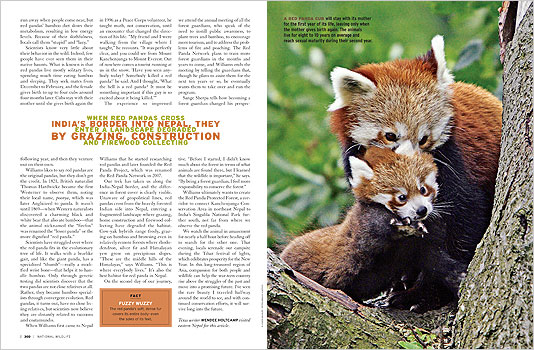 Our trek has taken us along the India-Nepal border, and the difference in forest cover is clearly visible. Unaware of geopolitical lines, red pandas cross from the heavily forested Indian side into Nepal, entering a fragmented landscape where grazing, home construction and firewood collecting have degraded the habitat. Cow-yak hybrids range freely, grazing on bamboo and browsing even in relatively remote forests where rhododendron, silver fir and Himalayan yew grow on precipitous slopes. “These are the middle hills of the Himalayas,” says Williams. “This is where everybody lives.” It’s also the best habitat for red panda in Nepal.

On the second day of our journey, we attend the annual meeting of all the forest guardians, who speak of the need to instill public awareness, to plant trees and bamboo, to encourage more tourism, and to address the problems of fire and poaching. The Red Panda Network plans to train more forest guardians in the months and years to come, and Williams ends the meeting by telling the guardians that, though he plans to assist them for the next ten years or so, he eventually wants them to take over and run the program.

Sange Sherpa tells how becoming a forest guardian changed his perspective. “Before I started, I didn’t know much about the forest in terms of what animals are found there, but I learned that the wildlife is important,” he says. “By being a forest guardian, I feel more responsibility to conserve the forest.”

Williams ultimately wants to create the Red Panda Protected Forest, a corridor to connect Kanchenjunga Conservation Area in northeast Nepal to India’s Singalila National Park further south, not far from where we observe the red panda.

We watch the animal in amazement for nearly a half hour before heading off to search for the other one. That evening, locals serenade our campsite during the Tihar festival of lights, which celebrates prosperity for the New Year. In this long-treasured region of Asia, compassion for both people and wildlife can help the war-torn country rise above the struggles of the past and move into a promising future. I’ve seen the rare beauty I traveled halfway around the world to see, and with continued conservation efforts, it will survive long into the future.