Scientists and entrepreneurs are increasingly borrowing concepts from the natural world to help them create better, more sustainable products 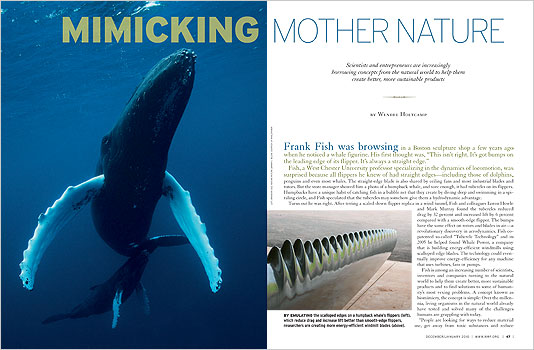 Frank Fish was browsing in a Boston sculpture shop a few years ago when he noticed a whale figurine. His first thought was, “This isn’t right. It’s got bumps on the leading edge of its flipper. It’s always a straight edge.”

Fish, a West Chester University professor specializing in the dynamics of locomotion, was surprised because all flippers he knew of had straight edges—including those of dolphins, penguins and even most whales. The straight-edge blade is also shared by ceiling fans and most industrial blades and rotors. But the store manager showed him a photo of a humpback whale, and sure enough, it had tubercles on its flippers. Humpbacks have a unique habit of catching fish in a bubble net that they create by diving deep and swimming in a spiraling circle, and Fish speculated that the tubercles may somehow give them a hydrodynamic advantage.

Turns out he was right. After testing a scaled-down flipper replica in a wind tunnel, Fish and colleagues Loren Howle and Mark Murray found the tubercles reduced drag by 32 percent and increased lift by 6 percent compared with a smooth-edge flipper. The bumps have the same effect on rotors and blades in air—a revolutionary discovery in aerodynamics. Fish co-patented so-called “Tubercle Technology” and in 2005 he helped found Whale Power, a company that is building energy-efficient windmills using scalloped-edge blades. The technology could eventually improve energy-efficiency for any machine that uses turbines, fans or pumps.

Fish is among an increasing number of scientists, inventors and companies turning to the natural world to help them create better, more sustainable products and to find solutions to some of humanity’s most vexing problems. The concept is called biomimicry and the idea behind it is simple: Over the millennia, living organisms in the natural world already have tested and solved many of the challenges humans are grappling with today.

“People are looking for ways to reduce material use, get away from toxic substances and reduce energy use. When they hear about biomimicry, they realize it’s an R&D program that’s been going on for 3.8 billion years,” says biologist Janine Benyus of the Biomimicry Guild, a Montana-based consulting firm that provides research and guidance on natural solutions for some of the country’s largest companies and government agencies.

In her landmark 1997 book Biomimicry: Innovation Inspired by Nature, Benyus issued a call to action, urging people to engage not just in shallow biomimicry—copying nature’s forms—but to push for deep biomimicry where manufacturing processes follow nature’s lead of sustainability. The ideal industrial loop, she says, would work as seamlessly as a redwood forest, where one’s processed wastes become food or input for another and nothing is wasted. In the book, Benyus also compiled dozens of examples of how people are emulating natural processes. 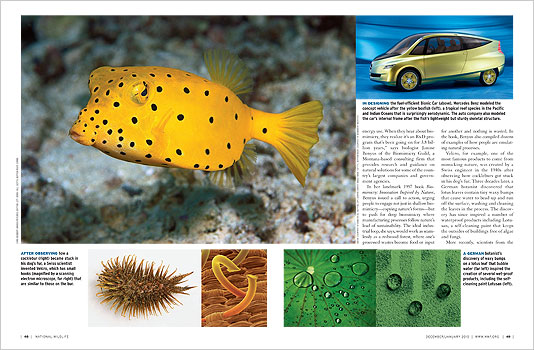 Velcro, for example, one of the most famous products to come from mimicking nature, was created by a Swiss engineer in the 1940s after observing how cockleburs got stuck in his dog’s fur. Three decades later, a German botanist discovered that lotus leaves contain tiny waxy bumps that cause water to bead up and run off the surface, washing and cleaning the leaves in the process. The discovery has since inspired a number of waterproof products including Lotusan, a self-cleaning paint that keeps the outsides of buildings free of algae and fungi.

More recently, scientists from the University of New South Wales discovered a revolutionary antibacterial compound in a type of red algal seaweed that lives off the coast of Australia. Bacteria form slimy biofilms but require a “quorum” to congregate, and so they constantly communicate with one another. The seaweed stays bacteria-free by emitting the compound furanone, which jams the bacteria’s communication sensors. Mimicking that natural action, the Australian company Biosignal created cleaning fluids that keep surfaces bacteria-free without killing them, which is a breakthrough because its use does not lead to the evolution of antibiotic resistance, as has happened with the proliferation of so many antibacterial cleaning compounds. So far, furanone works on various bacteria, including staphylococcus and vibrio, which causes cholera. It also works on the bacteria that corrode pipes, leading to oil spills.

In another flip on tradition, Mercedes-Benz recently modeled an ecologically friendly, fuel-efficient concept vehicle called the Bionic Car after the yellow boxfish, a squarish tropical creature found in reefs in the Pacific and Indian Oceans. Traditionally, aerodynamic cars have been built long and lean, but it turns out the boxfish has a drag coefficient nearly equal to that of a drop of water, which has one of the lowest drags possible. The automobile company not only borrowed from the boxfish’s boxy but aerodynamic shape but also from its unique skeletal structure that protects the animal from injury, making the car safer by putting extra material in certain parts of its frame and economizing by lightening up the load elsewhere.

Another product, the UltraCane, was developed not long ago as a result of research at the University of Leeds in Great Britain to help the blind “see” by utilizing the echolocation systems of bats. The cane emits an ultrasonic sound that bounces off objects, allowing vision-impaired people to develop a mental picture of where and how far away objects are—and hence better navigate around them. 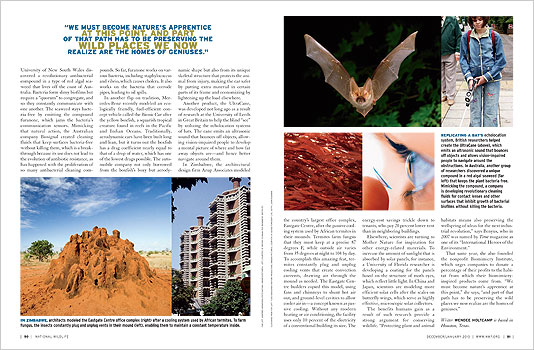 In Zimbabwe, the architectural design firm Arup Associates modeled the country’s largest office complex, Eastgate Centre, after the passive cooling system used by African termites in their mounds. Termites farm fungus that they must keep at a precise 87 degrees F, while outside air varies from 35 degrees at night to 104 by day. To accomplish this amazing feat, termites constantly plug and unplug cooling vents that create convection currents, drawing air through the mound as needed. The Eastgate Centre builders copied this model, using fans and chimneys to shunt hot air out, and ground-level cavities to allow cooler air in—a concept known as passive cooling. Without any modern heating or air conditioning, the facility uses only 10 percent of the electricity of a conventional building its size. The energy-cost savings trickle down to tenants, who pay 20 percent lower rent than in neighboring buildings.

Elsewhere, scientists are turning to Mother Nature for inspiration for other energy-related materials. To increase the amount of sunlight that is absorbed by solar panels, for instance, a University of Florida researcher is developing a coating for the panels based on the structure of moth eyes, which reflect little light. In China and Japan, scientists are modeling more efficient solar cells after the scales on butterfly wings, which serve as highly effective, microscopic solar collectors.

The benefits humans gain as a result of such research provide a strong argument for conserving wildlife. “Protecting plant and animal habitats means also preserving the wellspring of ideas for the next industrial revolution,” says Benyus, who in 2007 was named by Time magazine as one of its “International Heroes of the Environment.”

That same year, she also founded the nonprofit Biomimicry Institute, which urges companies to donate a percentage of their profits to the habitat from which their biomimicry-inspired products come from. “We must become nature’s apprentice at this point,” she says, “and part of that path has to be preserving the wild places we now realize are the homes of geniuses.”

Writer Wendee Holtcamp is based in Houston, Texas.