In Central America, scientists are using new animal tracking technology to probe the secret lives of some of the most elusive tropical creatures 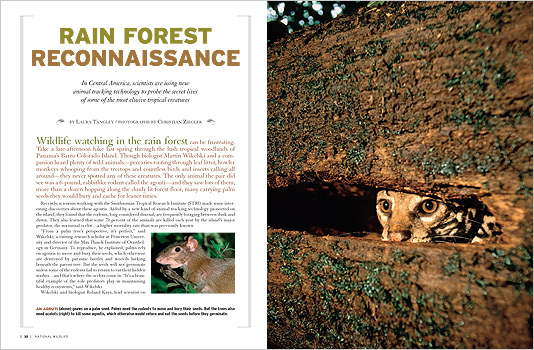 WILDLIFE WATCHING in the rain forest can be frustrating. Take a late-afternoon hike last spring through the lush tropical woodlands of Panama's Barro Colorado Island. Though biologist Martin Wikelski and a companion heard plenty of wild animals--peccaries rooting through leaf litter, howler monkeys whooping from the treetops and countless birds and insects calling all around--they never spotted any of these creatures. The only animal the pair did see was a 6-pound, rabbitlike rodent called the agouti--and they saw lots of them, more than a dozen hopping along the dimly lit forest floor, many carrying palm seeds they would bury and cache for leaner times.

Recently, scientists working with the Smithsonian Tropical Research Institute (STRI) made some interesting discoveries about these agoutis. Aided by a new kind of animal tracking technology pioneered on the island, they found that the rodents, long considered diurnal, are frequently foraging between dusk and dawn. They also learned that some 70 percent of the animals are killed each year by the island's major predator, the nocturnal ocelot--a higher mortality rate than was previously known.

"From a palm tree's perspective, it's perfect," said Wikelski, a visiting research scholar at Princeton University and director of the Max Planck Institute of Ornithology in Germany. To reproduce, he explained, palms rely on agoutis to move and bury their seeds, which otherwise are destroyed by parasitic beetles and weevils lurking beneath the parent tree. But the seeds will not germinate unless some of the rodents fail to return to eat their hidden stashes--and that's where the ocelots come in. "It's a beautiful example of the role predators play in maintaining healthy ecosystems," said Wikelski.

Wikelski and biologist Roland Kays, lead scientist on the agouti-ocelot study, were the brains behind the revolutionary animal tracking technology that made these discoveries possible. Dubbed ARTS, for Automated Radio Telemetry System, it consists of seven permanent radio towers, each bearing six antennas, that are distributed around the 3,700-acre island. The system allows Wikelski, Kays and other biologists working with STRI, which runs a research center on the island, to continuously monitor the locations and activity patterns of up to 200 radio-collared animals 24 hours a day.

"With traditional radio telemetry, it takes several researchers months of fieldwork to learn anything significant about a single animal," says Kays, curator of mammals at the New York State Museum. By automatically collecting information on multiple animals and relaying the data continually back to a computer in the lab, "ARTS allows us to ask scientific questions that were impossible before." First tested on ocelots and agoutis, the five-year-old system--funded by the Levinson Family Foundation and National Science Foundation--has to date been used in studies of 281 animals of 32 species ranging from toucans to kinkajous to howler and capuchin monkeys.

If Kays and his colleagues had been using traditional handheld transmitters to study agoutis, says the biologist, "we would not have been following the animals at night to begin with, because they were supposed to be sleeping." Neither would the researchers have discovered that so many agoutis were dying--or what was killing them. Because ARTS data come back to the lab in real time, the system alerts scientists when something unusual occurs, so they can rush out and investigate. Kays likens the work to CSI: Rain Forest. "The sooner you get to the scene of a crime," he says, "the more evidence there will be." Such haste is particularly important in the Tropics, where the remains of animals decompose quickly. "You cannot answer any ecological questions until you know where animals go and where they die," says Wikelski. 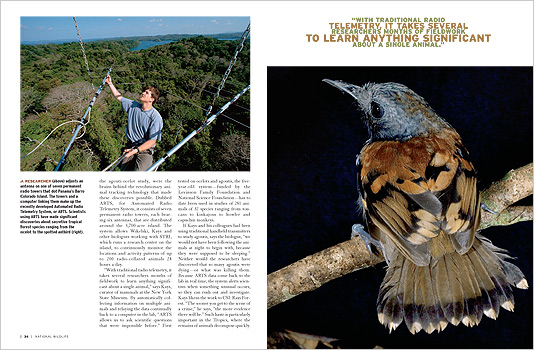 Wikelski's own research in Panama has focused on antbirds, small understory songsters that follow swarms of army ants to snare escaping prey missed by the predatory insects. One discovery he's made is that the birds, to conserve energy, dramatically decrease their metabolic rates at night, almost like mammals do when they hibernate. And Wikelski's Princeton student collaborator, Janeene Touchton, found that when one antbird species, the ocillated antbird, became extinct on the island, a formerly submissive species, the spotted antbird, began to thrive.

Some of the most interesting research spawned by ARTS probes interactions between social groups of the same species. One theory to explain the evolution of such groups is that, by living together, animals gain strength through numbers and can therefore better compete for scarce resources. Testing that hypothesis has proved tricky, however. For one thing, interactions among groups of wild animals occur infrequently. For another, observing more than one group simultaneously over long periods of time presents nearly insurmountable difficulties. And even if those obstacles can be overcome, "the presence of human observers tends to change how wild animals behave," says Harvard University anthropologist Meg Crofoot. 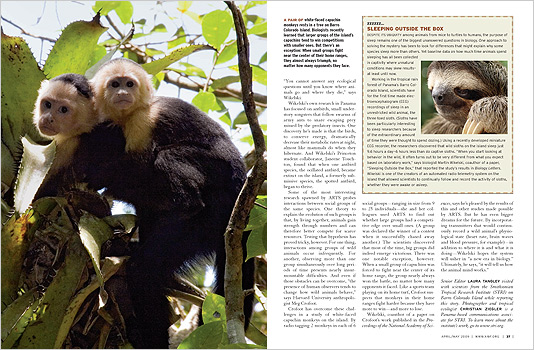 Crofoot has overcome these challenges in a study of white-faced capuchin monkeys on the island. By radio-tagging 2 monkeys in each of 6 social groups--ranging in size from 9 to 25 individuals--she and her colleagues used ARTS to find out whether large groups had a competitive edge over small ones. (A group was declared the winner of a contest when it successfully chased away another.) The scientists discovered that most of the time, big groups did indeed emerge victorious. There was one notable exception, however. When a small group of capuchins was forced to fight near the center of its home range, the group nearly always won the battle, no matter how many opponents it faced. Like a sports team playing on its home turf, Crofoot suspects that monkeys in their home ranges fight harder because they have more to win--and more to lose.

Wikelski, coauthor of a paper on Crofoot's work published in the Proceedings of the National Academy of Sciences, says he's pleased by the results of this and other studies made possible by ARTS. But he has even bigger dreams for the future. By incorporating transmitters that would continuously record a wild animal's physiological state (heart rate, brain waves and blood pressure, for example)--in addition to where it is and what it is doing--Wikelski hopes the system will usher in "a new era in biology." Ultimately, he says, "it will tell us how the animal mind works."

Senior Editor Laura Tangley visited with scientists from the Smithsonian Tropical Research Institute (STRI) on Barro Colorado Island while reporting this story. To learn more about the institute's work, go to www.stri.org.

Sleeping Outside the Box

Despite its ubiquity among animals from mice to turtles to humans, the purpose of sleep remains one of the biggest unanswered questions in biology. One approach to solving the mystery has been to look for differences that might explain why some species sleep more than others. Yet baseline data on how much time animals spend sleeping has all been collected in captivity where unnatural conditions may skew results--at least until now.

Working in the tropical rain forest of Panama's Barro Colorado Island, scientists have for the first time made electroencephalogram (EEG) recordings of sleep in an unrestricted wild animal, the three-toed sloth. (Sloths have been particularly interesting to sleep researchers because of the extraordinary amount of time they were thought to spend dozing.) Using a recently developed miniature EEG recorder, the researchers discovered that wild sloths on the island sleep just 9.6 hours a day--6 hours less than do captive sloths. "When you start looking at behavior in the wild, it often turns out to be very different from what you expect based on laboratory work," says biologist Martin Wikelski, coauthor of a paper, "Sleeping Outside the Box," that reported the study's results in Biology Letters. Wikelski is one of the creators of an automated radio telemetry system on the island that allowed scientists to continually follow and record the activity of sloths, whether they were awake or asleep.