The Secret Lives of Sea Eagles

The Steller's sea eagle, one of the world's largest raptors, leads a shadowy existence in the remote reaches of Russia's Kamchatka Peninsula 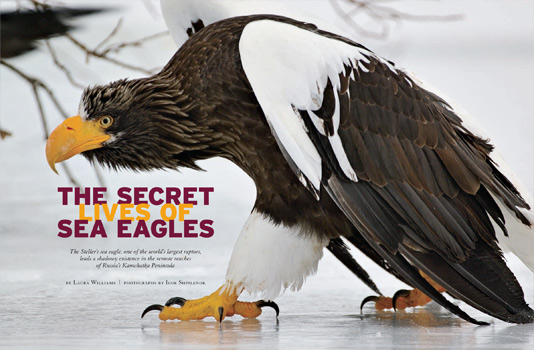 SNOW CRUNCHES underfoot as nature photographer Igor Shpilenok walks over a frozen lake from his warm cabin to an igloo of packed snow. Inside, he is protected from the harsh February wind, which sends temperatures below minus 4 degrees F on Russia's southern Kamchatka Peninsula. He sets up his camera, directing the lens through a small opening in the snow. Next to the window, nooks hold lens cases, a teapot, a mug.

Hearing a loud squawking and the flapping of wings, Shpilenok peers through his lens. Five Steller's sea eagles amass on shore around a large sockeye salmon pulled from a stretch of unfrozen water. One eagle tears at the fish's belly with its massive bill while the others watch, waiting for an opportunity to dive in. Suddenly a gust of wind and snow lifts the birds into the air. They struggle to return to the ground and the fish. Seeing an opportunity in the turmoil, a golden eagle that had been hovering nearby sweeps in to steal the fish.

The unsettled eagles land on alder trees along the lakeshore. Below, hundreds of sockeye in red and green mating colors spawn, laying eggs in pebbly nests before they die. These fish are easy prey for the eagles. Shpilenok watches as a bird returns to the ice and snatches an 8-pound sockeye from the lake with one clawed foot, flapping its massive wings to pull the fish onto blood-soaked snow. 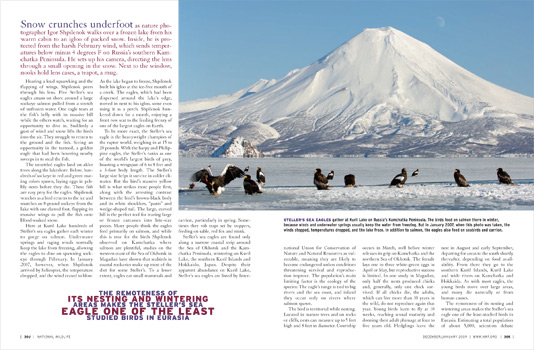 Here at Kuril Lake hundreds of Steller's sea eagles gather each winter to gorge on salmon. Underwater springs and raging winds normally keep the lake from freezing, allowing the eagles to dine on spawning sockeye through February. In January 2007, however, when Shpilenok arrived by helicopter, the temperature dropped, and the wind ceased to blow. As the lake began to freeze, Shpilenok built his igloo at the ice-free mouth of a creek. The eagles, which had been dispersed around the lake's edge, moved in next to his igloo, some even using it as a perch. Shpilenok hunkered down for a month, enjoying a front row seat to the feeding frenzy of one of the largest eagles on Earth.

To be more exact, the Steller's sea eagle is the heavyweight champion of the raptor world, weighing in at 15 to 20 pounds. With the harpy and Philippine eagles, the Steller's ranks as one of the world's largest birds of prey, boasting a wingspan of 6 to 8 feet and a 3-foot body length. The Steller's large size helps it survive in colder climates. But the bird's massive yellow bill is what strikes most people first, along with the arresting contrast between the bird's brown-black body and its white shoulders, "pants" and wedge-shaped tail. The large, curved bill is the perfect tool for tearing large or frozen carcasses into bite-size pieces. Many people think the eagles feed primarily on salmon, and while this is true for the birds Shpilenok observed on Kamchatka where salmon are plentiful, studies on the western coast of the Sea of Okhotsk in Magadan have shown that seabirds in coastal rookeries make up most of the diet for some Steller's. To a lesser extent, eagles eat small mammals and carrion, particularly in spring. Sometimes they rob traps set by trappers, feeding on sable, red fox and mink.

Steller's sea eagles are found only along a narrow coastal strip around the Sea of Okhotsk and the Kamchatka Peninsula, wintering on Kuril Lake, the southern Kuril Islands and Hokkaido, Japan. Despite their apparent abundance on Kuril Lake, Steller's sea eagles are listed by International Union for Conservation of Nature and Natural Resources as vulnerable, meaning they are likely to become endangered unless conditions threatening survival and reproduction improve. The population's main limiting factor is the ecology of the species: The eagle's range is tied to big rivers and the sea coast, and inland they occur only on rivers where salmon spawn. 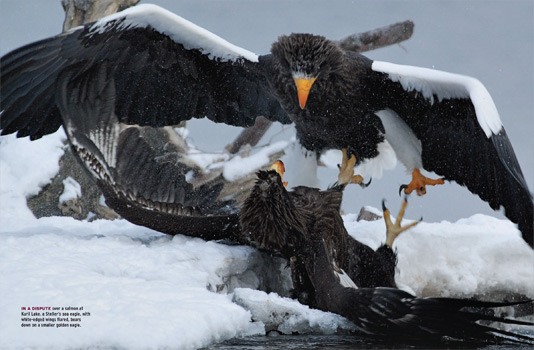 The bird is territorial while nesting. Located in mature trees and on rocks or cliffs, nests can measure up to 5 feet high and 8 feet in diameter. Courtship occurs in March, well before winter releases its grip on Kamchatka and the northern Sea of Okhotsk. The female lays one to three white-green eggs in April or May, but reproductive success is limited. In one study in Magadan, only half the nests produced chicks and, generally, only one chick survived. If all chicks die, the adults, which can live more than 30 years in the wild, do not reproduce again that year. Young birds learn to fly at 10 weeks, reaching sexual maturity and donning their adult plumage at four to five years old. Fledglings leave the nest in August and early September, departing for areas to the south shortly thereafter, depending on food availability. From there they go to the southern Kuril Islands, Kuril Lake and wide rivers on Kamchatka and Hokkaida. As with most eagles, the young birds move over large areas, and many die naturally or from human causes.

The remoteness of its nesting and wintering areas makes the Steller's sea eagle one of the least-studied birds in Eurasia. Estimating a total population of about 5,000, scientists debate whether the eagles' numbers are actually stable or slowly declining. Because recruitment of new breeders is one of the most important factors in determining the stability of the population, scientists are especially concerned with learning more about this cohort. Young birds need to be followed until they begin to breed, and such long-term studies are rare.

"We know nothing about the movements and survival of juveniles in this species and very little about these for any eagle, even the most common species," says Mike McGrady, an avian ecologist who has studied Steller's since 1988. Founder of Natural Research, a small wildlife research charity, McGrady went from his home in the United States to study golden eagles in Scotland before turning to Steller's. During his first visit to Kamchatka he worked with a German ornithologist to fit two birds with satellite transmitters. In the early 1990s, he teamed with Eugene Potapov, of the Magadan Division of the Russian Academy of Sciences, and Irina Utekhina, of Magadansky Nature Reserve, and they have collaborated on various sea eagle studies since then, marking birds and tracking them by satellite. In 2006 the San Diego Zoo began funding their research and brought Dave Rimlinger, the zoo's curator of birds, into the project. 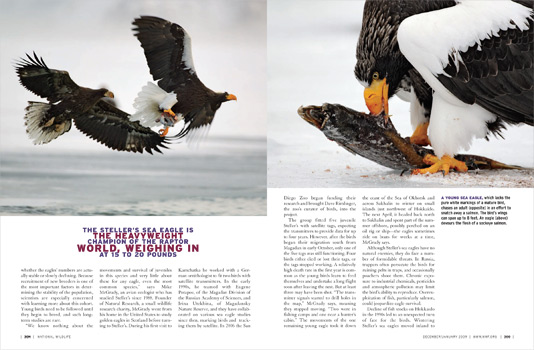 The group fitted five juvenile Steller's with satellite tags, expecting the transmitters to provide data for up to four years. However, after the birds began their migration south from Magadan in early October, only one of the five tags was still functioning. Four birds either died or lost their tags, or the tags stopped working. A relatively high death rate in the first year is common as the young birds learn to feed themselves and undertake a long flight soon after leaving the nest. But at least three may have been shot. "The transmitter signals started to drill holes in the map," McGrady says, meaning they stopped moving. "Two were in fishing camps and one near a hunter's cabin." The movements of the one remaining young eagle took it down the coast of the Sea of Okhotsk and across Sakhalin to winter on small islands just northwest of Hokkaido. The next April, it headed back north to Sakhalin and spent part of the summer offshore, possibly perched on an oil rig or ship--the eagles sometimes ride on boats for weeks at a time, McGrady says.

Although Steller's sea eagles have no natural enemies, they do face a number of formidable threats. In Russia, trappers often persecute the birds for ruining pelts in traps, and occasionally poachers shoot them. Chronic exposure to industrial chemicals, pesticides and atmospheric pollution may limit the bird's ability to reproduce. Overexploitation of fish, particularly salmon, could jeopardize eagle survival.

Decline of fish stocks on Hokkaido in the 1990s led to an unexpected turn of fate for the birds. Wintering Steller's sea eagles moved inland to feed on sika deer carcasses left by hunters. Because the island had experienced a boom in sika deer numbers, the Japanese government encouraged hunters to shoot as many deer as possible. As a result, hunters took only the choice parts of the game and left the rest to rot. Eagles fed on the carrion, ingesting lead fragments left in the deer, and began to die of lead poisoning. From 1994 to 1999, at least 55 Steller's sea eagles died from lead poisoning on the island, along with more than a dozen white-tailed sea eagles. Veterinarian Keisuke Saito, of the Hokkaido Wildlife Preservation Bureau, studied the impacts of lead poisoning in the birds' wintering grounds and advised Japan's Environmental Protection Agency to take measures. In 2001, the Japanese government banned the use of lead bullets in firearms, though lead shot in migrating waterfowl continues to be an issue. Eating one or two lead shotgun pellets, or a shard from a bullet, is enough to kill an adult eagle. 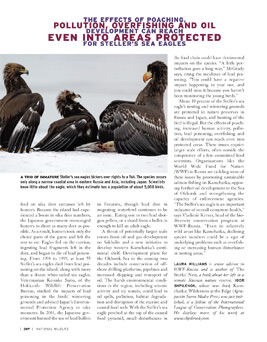 A threat of potentially larger scale comes from oil and gas development on Sakhalin and a new initiative to develop western Kamchatka's continental shelf. Development plans for the Okhotsk Sea in the coming two decades include construction of offshore drilling platforms, pipelines and increased shipping and transport of oil. The harsh environmental conditions in the region, including seismic activity and icy waters, could lead to oil spills, pollution, habitat degradation and disruption of the marine and coastal food web. With the Steller's sea eagle perched at the top of the coastal food pyramid, small disturbances in the food chain could have detrimental impacts on the species. "A little perturbation goes a long way," McGrady says, citing the incidence of lead poisoning. "You could have a negative impact happening in year one, and you could miss it because you haven't been monitoring the young birds."

About 10 percent of the Steller's sea eagle's nesting and wintering grounds are protected in nature preserves in Russia and Japan, and hunting of the bird is illegal. But the effects of poaching, increased human activity, pollution, lead poisoning, overfishing and oil development can reach even into protected areas. These issues require larger scale efforts, often outside the competency of a few committed bird scientists. Organizations like the World Wide Fund for Nature (WWF) in Russia are tackling some of these issues by promoting sustainable salmon fishing on Kamchatka, opposing further oil development in the Sea of Okhotsk and strengthening the capacity of enforcement agencies. "The Steller's sea eagle is an important indicator of overall ecosystem health," says Vladimir Krever, head of the biodiversity conservation program at WWF-Russia. "Even in relatively wild areas like Kamchatka, declining species numbers could be a sign of underlying problems such as overfishing or increasing human disturbance in nesting areas."

Laura Williams is senior advisor to WWF-Russia and is author of The Storks' Nest, a book about her life in a remote Russian nature reserve.