The northern pygmy-owl is among the smallest of North America’s owls, but until recently much of its life was a big mystery 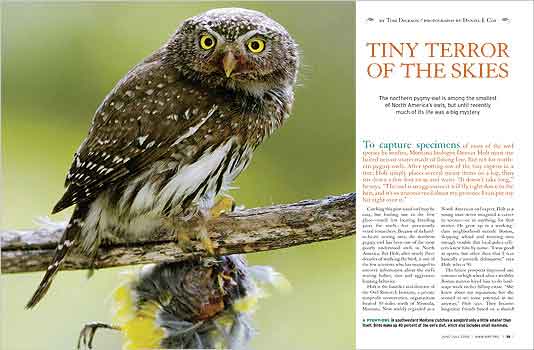 The northern pygmy-owl is among the smallest of North America’s owls, but until recently much of its life was a big mystery


TO CAPTURE SPECIMENS of most of the owl species he studies, Montana biologist Denver Holt must use baited nets or snares made of fishing line. But not for northern pygmy-owls. After spotting one of the tiny raptors in a tree, Holt simply places several meaty items on a log, then sits down a few feet away and waits. “It doesn’t take long,” he says. “The owl is so aggressive it will fly right down to the bait, and it’s so unconcerned about my presence I can put my hat right over it.”

Catching this pint-sized owl may be easy, but finding one in the first place—much less locating breeding pairs for study—has persistently vexed researchers. Because of its hard-to-locate nesting sites, the northern pygmy-owl has been one of the most poorly understood owls in North America. But Holt, after nearly three decades of studying the bird, is one of the few scientists who has managed to uncover information about the owl’s mating habits, diet and aggressive hunting behavior.

Holt is the founder and director of the Owl Research Institute, a private nonprofit conservation organization located 30 miles north of Missoula, Montana. Now widely regarded as a North American owl expert, Holt as a young man never imagined a career in science—or in anything, for that matter. He grew up in a working-class neighborhood outside Boston, skipping school and running into enough trouble that local police officers knew him by name. “I was good at sports, but other than that I was basically a juvenile delinquent,” says Holt, who is 50.

His future prospects improved one summer in high school after a wealthy Boston matron hired him to do landscape work on her hilltop estate. “She knew about my reputation, but she seemed to see some potential in me anyway,” Holt says. They became long-time friends based on a shared interest in birding. “That first summer she saw me watching a red-tailed hawk, and a few days later she gave me my first new pair of binoculars and a bird book.”

After two years of community college in Massachusetts, Holt transferred to the University of Montana at Missoula, drawn by the surrounding Rocky Mountain wildlands. As an undergraduate, his interest in raptors grew. One afternoon, exploring a forest near campus, he and a friend stumbled upon a northern pygmy-owl nesting in a tree cavity. For the next three months the students visited the site daily, later publishing their observations in a peer-reviewed journal. The article was the first of more than 30 Holt has written since on owls. “Of all the raptors, owls have always interested me the most,” he says. “I don’t know why. I’ve heard people say we see ourselves in owls, because they have a face like a human’s, with two eyes side by side.” Holt studies many owl species and is considered a world authority on the snowy and the long-eared, but it’s the reclusive northern pygmy-owl that has intrigued him the longest.


Bane of Songbirds
One of 30 pygmy-owl species worldwide, the northern pygmy-owl is a forest bird that ranges west of the Rocky Mountains from British Columbia south to Central America. Unlike most owls, which hunt by night and prey mainly on meadow voles and other small mammals, the northern pygmy-owl hunts by day, and roughly 40 percent of its diet is composed of birds. The plump little owl attacks from a perch and grabs its prey with talons, using its beak to snap the neck. “Bloodthirsty” and “rapacious” is how the nature writer Arthur C. Bent described this mini-raptor in 1938. Holt laughs at the antiquated language but understands the author’s sentiments. “Northern pygmy-owls are fierce little birds,” he says. “They’ll attack prey much larger than themselves. I’ve seen one standing on a big woodpecker, trying to kill it.”

Only slightly larger than a soda can from head to tail, the feisty owl weighs just 2.5 ounces, with females running slightly larger than males. Among North American owls, only the Cuban pygmy-owl and desert-dwelling elf owl are smaller. The northern pygmy-owl is mostly gray or brown with white spots on its round head, back and wings; dark vertical marks streak the light-colored belly. On the back of the bird’s head is a pair of dark, oval spots that look like large eyes. “One theory is that the northern pygmy-owl’s eyespots reduce predation” Holt says. “Another is that they reduce mobbing by prey birds.” He explains that because northern pygmy-owls hunt birds during daylight, the raptors are constantly attacked from behind by flocks of their prey. “Eyespots might have evolved so the owls wouldn’t get whacked in the back of the head so much.”

To learn if that was the case, Holt and Caroline Deppe, a University of Montana graduate student, in 1999 compared the mobbing behavior of small birds on two life-sized pygmy owl replicas, one with eyespots on the nape and the other without. During a 10-week period the researchers positioned the wooden models in forest clearings near Missoula. They attracted small birds by using the calls of northern pygmy-owls, black-capped chickadees and other small birds, then used a thin rope to give the models lifelike movement. The trick worked. Birds descended on the dummies, diving repeatedly and raising alarm calls.

During the study period, the researchers observed 31 different species mobbing the wooden owls, with red-breasted nuthatches and black-capped chickadees appearing most frequently. As suspected, the mobbers spent more time at the front of the model painted with eyespots. “It appears that a mobbing bird behind the owl thinks, ‘Oh, I’m spotted,’ then moves to the front, where it’s more vulnerable,” Holt says, adding that eyespots also appear to reduce the number of mobbers and duration of mobbing.

New Images
In another first, Holt and several colleagues made detailed scientific observations of northern pygmy-owl nests and breeding behavior. To find the nests, the researchers walked through forested and riparian areas of western Montana in late winter, whistling the owl’s toot-pause-toot mating call. “Whenever we heard a response, we looked for trees, mainly aspen with old woodpecker holes, and used a peeper camera [a tall periscopelike device] to see if there were eggs in the cavity,” Holt says.


After finally locating an active nest, they erected a ladder and attached a platform, similar to a deer stand, 25 feet high on the side of the tree behind the opening. From the stand, a carpenter then cut out the back of the nesting cavity, only temporarily disturbing the nesting female, and installed sliding doors—a glass one for observation and a wooden one to restore the birds’ privacy. Holt says he was thrilled to watch the female incubating her eggs, the eggs hatching and the chicks growing into fledglings. “As far as I know, none of that had ever before been seen, much less photographed,” he says.

Though hard to find, the northern pygmy-owl is not considered endangered or even rare. It is widely distributed in western states and, during winter, occasionally can be seen attacking small birds at backyard feeders. Unlike many other raptor populations declining because of habitat loss, global warming and other environmental stresses, northern pygmy-owl numbers appear healthy and stable throughout the species’ range. Holt says one reason may be the owl’s catholic diet. “They can shift from birds to insects to mammals and even amphibians, depending on what’s available,” he says. Holt adds that the availability of nesting cavities would be the only thing he can think of that would limit the species’ long-term health. “As long as they have the right size of snags to nest in, and forest managers continue to leave diverse sizes of snags, they will probably do okay,” he says.

Tom Dickson is a writer and editor based in Helena, Montana.