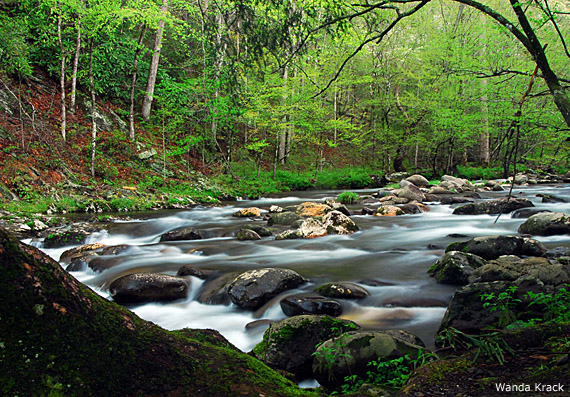 NWF, Ducks Unlimited and Trout Unlimited recently issued four reports on state water protection revealing how two U.S. Supreme Court decisions—the SWANCC ruling of 2001 and the Rapanos ruling of 2006—are threatening waters across the nation. The decisions cast doubt over whether federal Clean Water Act protections still exist for many important streams, wetlands and other waters. As a result, the U.S. Environmental Protection Agency (EPA) and the U.S. Army Corps of Engineers—the leading federal water managers—are no longer sure of their legal authority for protecting geographically isolated waters such as the seasonal headwater streams and wetlands on which more than a third of Americans depend for at least part of their drinking water.

Subsequent agency directives have effectively removed federal protections for 20 million acres of geographically isolated wetlands. “The lack of clarity over what is covered by the Clean Water Act threatens to undermine years of conservation efforts,” said Kim Diana Connolly, an associate law professor at South Carolina University who helped compile one of the reports. Douglas F. Mundrick, an EPA lawyer, told the New York Times recently, “We are in essence shutting down our clean-water programs in some states. This is a huge step backward.” EPA legal cases against polluters have dropped by almost half since the court rulings.
The four reports examine how the rulings affect water protection in South Carolina, Tennessee, Montana and Colorado, which serve as examples of threats across the nation.

The loss of protections threatens fish, waterfowl and other wildlife in all four states. Up to 60 percent of stream miles in Tennessee (above) and half of its 787,000 remaining acres of wetland may no longer be federally protected. “Without a strong Clean Water Act, the state’s heritage of diverse wildlife and clean waters is at risk,” says Mike Butler, chief executive officer of the Tennessee Wildlife Federation.

The same is true in Colorado, where about 70 percent of the state’s 95,537 miles of rivers and streams are at risk of losing important protections. “Without these protections, Colorado’s limited and precious aquatic resources are at further risk,” says Dennis Buechler, director emeritus of the Colorado Wildlife Federation and author of the Colorado report, pointing out that these waters support more than 75 percent of state wildlife.

Uncounted numbers of Montana’s prairie potholes, critical for breeding waterfowl, could lose protections too, jeopardizing a significant part of the state’s economy. “Sportsmen spend a billion dollars in Montana every year, and the diminished protections threaten that economic engine,” says Tom France, NWF Northern Rockies regional executive director. The Senate Environment and Public Works Committee last year passed a bill, S.787, to restore the protections, but the House has introduced no companion bill. “Ideally, we would like to see action on such a bill before the end of summer,” says Jim Murphy, NWF wetlands and water resources counsel

NWF’s 2009 annual report highlights the strides we have made toward our mission of protecting wildlife and wild places. Read about the accomplishments your support has made possible.

The U.S. Supreme Court ruled recently that it would not hear a lawsuit brought by the City of Dallas and the Texas Water Development Board against the Neches River National Wildlife Refuge. Dallas and the water board had sought to block development of the refuge to keep the Neches River available for a potential impoundment, Fastrill Reservoir, from which Dallas planned to draw about 3 percent of its water after 2060.

“The proposed reservoir was not a particularly good source of water for Dallas,” says Janice Bezanson, executive director of Texas Conservation Alliance (TCA), an NWF state affiliate that led the battle to protect the refuge. “Dallas and other cities in the metroplex can get a lot more water for similar or less cost from existing reservoirs, and by doing so, avoid condemning private land and harming the timber-agribusiness economy of East Texas.”

TCA is currently working to secure a National Wild and Scenic River designation for the refuge’s namesake waterway, which would mean increased protections for the river.

Since 1950, the Conservation Council for Hawai’i (CCH) has campaigned tirelessly for Hawaii’s unique wildlife—more endangered than in any other state. “CCH is Hawaii’s voice for wildlife,” says the NWF affiliate’s executive director, Marjorie Ziegler. Current initiatives include:

Support for a shark-finning ban: CCH is backing state and federal legislation to ban shark finning, the wasteful practice of catching sharks, slicing off their fins and discarding the animals (often alive) into the sea. A resolution opposing shark finning was adopted at NWF’s annual meeting in April.

• Raising awareness about the plight of Hawaiian seabirds, which are threatened by predators, the Hawaii-based longline swordfish industry and the loss of nesting habitat due to sea-level rise.

• Taking legal action against the Kaua’i Island Utility Cooperative and the St. Regis Princeville Resort on Kaua’i for violating the Endangered Species Act. The utility’s power lines and resort’s bright lights are responsible for the deaths of hundreds of endangered Hawaiian petrels and Newell’s shearwaters each year. Birds collide with the lines and are disoriented by the lights as they attempt to head to sea.

They Came From Climate Change

As a result of global warming, a host of harmful species is creeping up from lower elevations, attacking from foreign countries and settling into areas where once they were unable to survive, says a new NWF report. They Came from Climate Change profiles seven invaders that are primed to benefit due to warmer winters and a shift in seasons.

Each year NWF holds the Chill Out™ competition to recognize innovators of global warming solutions at colleges and universities all across the country. An annual webcast showcases the winners. Watch the 2010 production.

In the face of a stiff legal challenge from NWF and other groups, Shell Oil Company announced in February that it would drop plans to use water from the Yampa River in northwest Colorado for oil-shale development.

“The Yampa, one of the West’s last free-flowing rivers, is home to endangered species and provides drinking water and habitat to a host of wildlife species,” says NWF Senior Counsel Joe Feller. “It also provides important recreational opportunities, including fishing and rafting.” Feller, with law students from NWF’s Natural Resources Litigation Clinic at the University of Colorado in Boulder, led NWF’s legal effort.

Development of oil shale, among the dirtiest of fossil fuels, would have increased the region’s greenhouse gas emissions, Feller says. Producing a million barrels of oil shale daily could require the energy output of roughly ten power plants and five coal mines.

For more on energy development in the West, see “The Dirty Truth Behind Clean Natural Gas.”

Open the Door, Sleep Under the Stars

On June 26 Josh and Terri Shortlidge will participate in their fourth Great American Backyard Campout®, the NWF event that changed their lives—or at least their sleeping habits.

“Last summer we woke up so refreshed and filled with the wonders of nature that we just had to go back out the next night … and then the next night,” says Josh. Since participating in the 2009 event, the Massachusetts couple has spent all but a few snowy nights outside in their tent. When the seasons grew colder, they adjusted their bedding for warmth and protected their backyard sleeping quarters with a geodesic dome given to them by an architect friend.

While the Shortlidges don’t expect other folks to make a daily routine of sleeping outside, they do “hope to inspire others to enjoy what we enjoy so much,” says Terri.

“The Great American Backyard Campout is about creating lasting memories by connecting with family and friends in the great outdoors,” says Karoline Hurd, NWF’s senior manager of events. To learn more about the campout, visit www. backyardcampout.org. The website features camping tips, activities and other resources.

Trees for the 21st Century and Beyond

“Our focus is on helping Big Brothers Big Sisters develop more green activities for the mentor-child pairs, starting with tree planting via our Trees for the 21st Century program,” says Eliza Russell, NWF’s director of education. “NWF is kicking off the partnership by providing a pilot group of mentors in southeastern Pennsylvania with hands-on, science-based activities to help young people learn about the importance of trees and how to plant and take care of them for the future.”

Schools, scout troops and other service organizations can also benefit from Trees for the 21st Century. “The initiative aims to prepare the next generation of environmental stewards to protect and improve the world’s natural resources,” says Russell. Learn more about the new program.