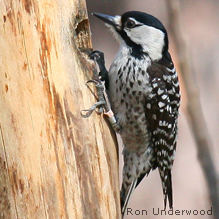 The bald eagle may be the symbol of our country, but it also lives in Canada and Mexico. Are there any birds we can truly claim as our own? We put this question to a team of ornithological experts, who came up with a list of 15 U.S. “endemics”—bird species that live nowhere else on Earth but in the continental United States.

THE RULES OF THE GAME

We exclude Hawaiian endemics because Hawaii is so distinct from the mainland ecologically. Our all-American list is confined to the continental United States.

Only year-round U.S. residents are included. We exclude "breeding season endemics" that winter south of the border.

We include vagrants—U.S. residents that show up occasionally in Canada or Mexico—if no established populations exist in those other nations.

The list also hinges on how species are defined. Some birds make the list because of “taxonomic splits”—which occur when new information reveals that one species is actually two or more.

The American Ornithologists’ Union (AOU) once recognized just one scrub jay. In 1998, this species was split in three—making two instant all-Americans. The Florida scrub-jay lives in small patches of scrub-oak habitat in Florida. The island scrub-jay lives only on Santa Cruz Island, 15 miles off the California coast. The western scrub-jay doesn’t make the list because its populations extend into Mexico.
Similarly, bird guides once listed the sharp-tailed sparrow as a single species, wintering along the Atlantic and Gulf coasts and breeding up into Canada. In 1998, noting two populations that didn’t breed, AOU split the species, creating the Nelson’s sharp-tail (the Canadian breeders) and the all-American saltmarsh sharptailed sparrow.

More recently—in 2000—AOU split sage-grouse, noting two groups that differed in body size, plumage, vocalizations and courtship displays. The greater sage-grouse ranges (barely) into Canada. The Gunnison sage-grouse is the new all-American, with tiny populations on the sagebrush plains of Colorado and Utah.

Half a century back, the black rosy-finch and brown-capped rosy finch—sparrow-sized alpine birds with delicate pink underfeathers—were considered distinct species. The two were later lumped as one, called the rosy finch. In 1998 AOU split the species again; both finches live only in the continental United States.

Like the Florida scrub jay, the yellow-billed magpie is endemic both to the United States and to one U.S. state. In the magpie’s case, it’s the state of California.

McKay’s bunting, another double endemic, winters only on the extreme western coast of Alaska. (The bird breeds in summer on two U.S. islands in the Bering Sea). Its close relative, the snow bunting, is common in Canada and the United States.

The red-cockaded woodpecker has been protected under the Endangered Species Act for decades. The mature longleaf pine forests it prefers once carpeted the Southeast, but logging has removed much of this forest.

Also almost completely localized to the southern pine-woods habitat—and declining throughout its range—is Bachman’s sparrow. This species expanded its range northward in the early 20th century, moving into open habitat on abandoned farms—but those populations dwindled as farms reverted back to dense forest.

A candidate for listing as federally endangered, the lesser prairie chicken has declined in numbers by about 97 percent since the 1800s—its required sagebrush-and-oak habitat taken over by farming. Only about 10,000 individuals remain.

The aptly named seaside sparrow is found only in coastal regions—specifically, saltmarshes from Massachusetts to south Texas (vagrants do show up in Nova Scotia but don’t breed there). Of several distinctive subspecies, the Cape Sable seaside sparrow is endangered while the dusky seaside sparrow was declared extinct in 1980.

North America has seven different chickadee species; the Carolina chickadee is the smallest—and the only U.S. endemic. Almost identical in appearance to the black-capped chickadee, it lives in forests of the Southeast. The conservation status of this species is uncertain—declining in some areas, increasing in others.

In contrast to threatened U.S. endemics, the fish crow is increasing in numbers. While its look-alike relative, the American crow, ranges throughout the United States and into Canada during the breeding season, fish crows live only in the eastern United States. Not only is its population growing, its range is expanding both inland and northward.

Resembling a skinny crow—but more closely related to blackbirds—is the boat-tailed grackle. The AOU lumped it with the great-tailed grackle (which ranges into Mexico) way back in 1910. In 1983 the two species were split again. The boat-tail lives exclusively along the eastern seaboard plus Florida and the Gulf Coast.

Some birders say the California condor should also make the list. With a population of just 215 birds, it lives only in California and Arizona. As little as 150 years ago though, condors ranged to Mexico and Canada.

The story is similar for the greater prairie-chicken. This bird is currently found only in the United States, but until about a decade ago it also bred in Canada.

Check out most bird guides, and you’d swear the brown-headed nuthatch should also make the list. According to range maps, this pert little bird with a “rubber ducky call” lives only in southeastern pine forests. What the maps don’t show is that it also occurs outside the continental United States—on Grand Bahama Island, 105 miles off the coast of Miami. (That population—tiny and threatened—is barely hanging on.)

If you know of other U.S. endemics, let us know. As you can see from the list, the numbers are always changing.