This tiny terror is a predator with a bottomless need for food. 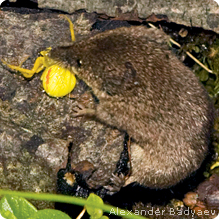 
It’s the illusive and poorly known American pygmy shrew, which weighs barely 0.07 ounces, with a body about 1.5 to 2 inches long. The one in the photo to the right is eating a spider and was photographed in Montana.


Shrews are tiny predators that are among the world’s most ancient and widespread mammals: They evolved 45 million years ago and in North America have remained virtually unchanged for at least 10 million years. Their speed of life defies imagination—they have the fastest heartbeat (1,200 per minute) and one of the shortest life spans (11 to 13 months) of any mammal. They never sleep for more than a few minutes at a time.

Instead, their brief life is spent in nonstop foraging. To stay alive the pygmy shrew has to eat three times its body weight daily, which means capturing prey every 15 to 30 minutes, day and night; a full hour without food means certain death.

Shrews and the Sweat of Doom


Shrews, in short, seem invincible. Yet in northern latitudes they are unusually vulnerable to accelerated global warming. With their breakneck metabolism, they cannot survive exposure to temperatures higher than 77 degrees F.

Adapted from "The Maiming of the Shrew" by Alexander Badyaev, NATIONAL WILDLIFE, February/March 2009.