Vampires are the stuff of legend, but blood-sucking creatures are a real part of nature 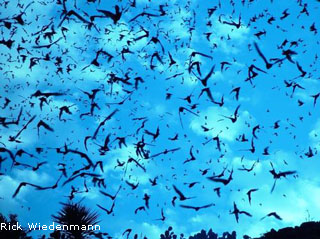 With Halloween drawing near, our thoughts turn to horror, and among the most popular creatures of horror is the vampire.  Although nature has produced no undead beings with the ability to change into bats, it does offer several species that survive by feeding on blood.  Here is a sample:

Vampire finches: You can find these sparrow-sized birds in the Galapagos, using their sharp beaks to open wounds in larger birds, such as boobies, and feeding on their blood; however, they don’t live exclusively on blood.

Leeches: Leeches belong to a group called segmented worms (so does the earthworm), and there are about 650 different species of them. Some live on land, some in water, and many feed exclusively on blood. They swim or crawl up to their prey, latch on with sucking mouth parts and draw blood. Some aquatic leeches will swim into nasal cavities and stay there, feeding and growing. Capable of holding undigested blood in their stomachs, parasitic leeches can go months between feedings.

Vampire Bats: They are found only in Latin America, which is home to three species of vampire bat. Some species feed on fowl, others on mammals, scuttling around at night and crawling up on their prey (in the case of large mammals) or under it (in the case of birds).  However, blood is mostly water, so even though vampire bats are adapted to feeding on it, their life is a wearisome pursuit of food: Two or three days without a good feed, and they starve to death. As the bats feed they have to get rid of the excess water they take in while absorbing the relatively small amount of protein they get from blood. So, vampire bats begin urinating while they are still feeding.

Candiru: This small South American catfish, which grows from an inch to 6 inches long, wears its eyes almost atop its head. Spines around its mouth allow it to latch onto the gills of larger fish. Once fixed in place, it wields its sharp teeth to open a wound and start feeding on blood.

The Stuff of Legends: Animals and Vampires

According to some folklore, as well as myriad motion pictures, vampires can turn into bats or wolves, but those aren’t the vampire’s only animal connections.

In Bulgaria and Serbia, people believed that animals had a role in making the dead into vampires. If a cat or dog jumped over a corpse—presto!—the dead became a vampire.  The same thing might happen to a cadaver if a bird flew over.

But . . . there was also a role for animals in stopping vampires, according to Serbian belief.  If you happened to have a plague of vampires in your neighborhood, all you had to do to find the vamps was put a virgin boy on a virgin black horse and lead the horse through a graveyard.  When you came to a grave the horse wouldn’t cross, you had yourself a vampire.  Then it was just a matter of digging up the grave, putting a stake through the corpse’s heart . . . and you were on your way to ending that plague of bloodsucking evil spirits.  Just repeat the remedy as needed.

"Got Blood?" from the editors of Ranger Rick
"Wildlife Vampires" series on the Wildlife Promise blog
"Don't Let the Bedbugs Bite"