The nation's first attempt to protect an entire ecosystem, the refuge has survived half a century of controversy but now faces the threat of global warming 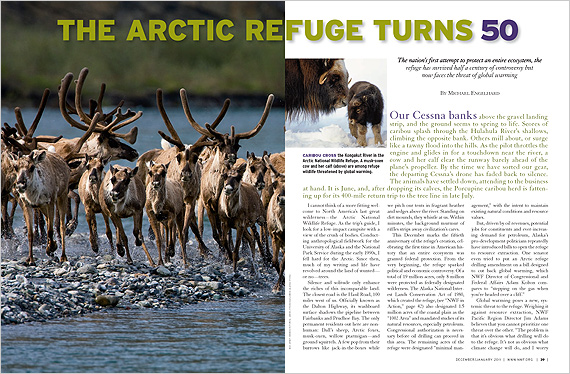 This December marks the fiftieth anniversary of the Arctic National Wildlife Refuge’s creation, celebrating the first time in American history that an entire ecosystem was granted federal protection. From the very beginning, the refuge sparked political and economic controversy. Of a total of 19 million acres, only 8 million were protected as federally designated wilderness. The Alaska National Interest Lands Conservation Act of 1980, which created the refuge, also designated 1.5 million acres of the coastal plain as the “1002 Area” and mandated studies of its natural resources, especially petroleum. Congressional authorization is necessary before oil drilling can proceed in this area. The remaining acres of the refuge were designated “minimal management,” with the intent to maintain existing natural conditions and resource values.

But, driven by oil revenues, potential jobs for constituents and ever-increasing demand for petroleum, Alaska’s pro-development politicians repeatedly have introduced bills to open the refuge to resource extraction. One senator even tried to put an Arctic refuge drilling amendment on a bill designed to cut back global warming, which NWF Director of Congressional and Federal Affairs Adam Kolton compares to “stepping on the gas when you’re headed over a cliff.”

Global warming poses a new, systemic threat to the refuge. Weighing it against resource extraction, NWF Pacific Region Director Jim Adams believes that you cannot prioritize one threat over the other. “The problem is that it’s obvious what drilling will do to the refuge. It’s not as obvious what climate change will do, and I worry that that leads people to underestimate the importance of the issue.” 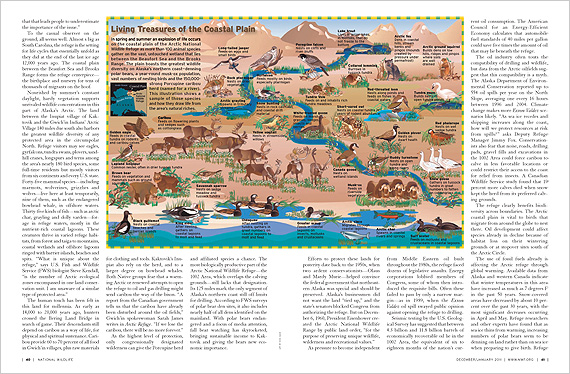 Wildlife in the Arctic Refuge

To the casual observer on the ground, all seems well. Almost as big as South Carolina, the refuge is the setting for life cycles that essentially unfold as they did at the end of the last ice age 12,000 years ago. The coastal plain between the Beaufort Sea and Brooks Range forms the refuge centerpiece—the birthplace and nursery for tens of thousands of caribou migrants.

Nourished by summer’s constant daylight, hardy vegetation supports unrivaled wildlife concentrations in this part of Alaska’s Arctic. The land between the Inupiat village of Kaktovik and the Gwich’in Indians’ Arctic Village 140 miles due south also harbors the greatest wildlife diversity of any protected area in the circumpolar North. Refuge visitors may see eagles, gyrfalcons, tundra swans, plovers, sandhill cranes, longspurs and terns among the area’s nearly 180 bird species, some full-time residents but mostly visitors from six continents and every U.S. state. Forty-five mammal species—including marmots, wolverines, grizzlies and wolves—live here at least temporarily, nine of them, such as the endangered bowhead whale, in offshore waters. Thirty-five kinds of fish—such as arctic char, grayling and dolly varden—forage in refuge waters, mostly in the nutrient-rich coastal lagoons. These creatures thrive in varied refuge habitats, from forest and taiga to mountains, coastal wetlands and offshore lagoons ringed with barrier islands, beaches and spits. “What is unique about the refuge,” says U.S. Fish and Wildlife Service (FWS) biologist Steve Kendall, “is the number of Arctic ecological zones encompassed in one land conservation unit. I am unaware of a similar type of protected area.”

The human touch has been felt in this land for millennia. As early as 14,000 to 20,000 years ago, hunters crossed the Bering Land Bridge in search of game. Their descendants still depend on caribou as a way of life, for physical and spiritual sustenance. Caribou provide 60 to 70 percent of all food in Gwich’in villages, plus raw materials for clothing and tools. Kaktovik’s Inupiat also rely on the herd, and to a larger degree on bowhead whales. Both Native groups fear that a warming Arctic or renewed attempts to open the refuge to oil and gas drilling might send caribou the way of the bison. “A report from the Canadian government tells us that the caribou have already been disturbed around the oil fields,” Gwich’in spokeswoman Sarah James writes in Arctic Refuge. “If we lose the caribou, there will be no more forever.”

As the highest level of protection, only congressionally designated wilderness can give the Porcupine herd and affiliated species a chance. The most biologically productive part of the Arctic National Wildlife Refuge—the 1002 Area, which overlaps the calving grounds—still lacks that designation. Its 125 miles mark the only segment of Alaska’s northern coast still off-limits for drilling. According to FWS surveys of polar bear den sites, it also includes nearly half of all dens identified on the mainland. With polar bears endangered and a focus of media attention, fall bear watching has skyrocketed, bringing sustainable income to Kaktovik and giving the bears new economic importance.

Efforts to protect these lands for posterity date back to the 1950s, when two ardent conservationists—Olaus and Mardy Murie—helped convince the federal government that northeastern Alaska was special and should be preserved. Alaska’s businessmen did not want the land “tied up,” and the state’s senators blocked Congress from authorizing the refuge. But on December 6, 1960, President Eisenhower created the Arctic National Wildlife Range by public land order, “for the purpose of preserving unique wildlife, wilderness and recreational values.”

As pressure to become independent from Middle Eastern oil built throughout the 1980s, the refuge faced dozens of legislative assaults. Energy corporations lobbied members of Congress, some of whom then introduced the requisite bills. Often these failed to pass by only a narrow margin—as in 1989, when the Exxon Valdez; oil spill swayed public opinion against opening the refuge to drilling. 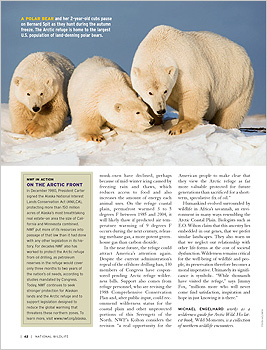 Seismic testing by the U.S. Geological Survey has suggested that between 4.3 billion and 11.8 billion barrels of economically recoverable oil lie in the 1002 Area, the equivalent of six to eighteen months of the nation’s current oil consumption. The American Council for an Energy-Efficient Economy calculates that automobile fuel standards of 40 miles per gallon could save five times the amount of oil that may lie beneath the refuge. The oil industry often touts the compatibility of drilling and wildlife, but data from the Arctic oilfields suggest that this compatibility is a myth. The Alaska Department of Environmental Conservation reported up to 554 oil spills per year on the North Slope, averaging one every 16 hours between 1996 and 2004. Climate change makes more Exxon Valdez scenarios likely. “As sea ice recedes and shipping increases along the coast, how will we protect resources at risk from spills?” asks Deputy Refuge Manager Jimmy Fox. Conservationists also fear that noise, roads, drilling pads, gravel fills and excavations in the 1002 Area could force caribou to calve in less favorable locations or could restrict their access to the coast for relief from insects. A Canadian Wildlife Service study found that 19 percent more calves died when snow kept the herd from its preferred calving grounds.

The use of fossil fuels already is affecting the Arctic refuge through global warming. Available data from Alaska and western Canada indicate that winter temperatures in this area have increased as much as 7 degrees F in the past 50 years. Snow-covered areas have decreased by about 10 percent over the past 30 years, with the most significant decreases occurring in April and May. Refuge researchers and other experts have found that as sea ice thins from warming, increasing numbers of polar bears seem to be denning on land rather than on sea ice when preparing to give birth. Refuge musk-oxen have declined, perhaps because of mid-winter icing caused by freezing rain and thaws, which reduces access to food and also increases the amount of energy each animal uses. On the refuge coastal plain, permafrost warmed 3 to 5 degrees F between 1985 and 2004; it will likely thaw if predicted air temperature warming of 9 degrees F occurs during the next century, releasing methane gas, a more potent greenhouse gas than carbon dioxide.

A New Drive to Open the Refuge to Oil Development

In the near future, the refuge could attract America’s attention again. Despite the current administration’s repeal of the offshore drilling ban, 130 members of Congress have cosponsored pending Arctic refuge wilderness bills. Support also comes from refuge personnel, who are revising the 1988 Comprehensive Conservation Plan and, after public input, could recommend wilderness status for the coastal plain and other unprotected portions of this Serengeti of the North. NWF’s Kolton considers the revision “a real opportunity for the American people to make clear that they view the Arctic refuge as far more valuable protected for future generations than sacrificed for a short-term, speculative fix of oil.”

Humankind evolved surrounded by wildlife in Africa’s savannah, an environment in many ways resembling the Arctic Coastal Plain. Biologists such as E.O. Wilson claim that this ancestry lies embedded in our genes, that we prefer similar landscapes. They also warn us that we neglect our relationship with other life-forms at the cost of societal dysfunction. Wilderness remains critical for the well-being of wildlife and people; its preservation therefore becomes a moral imperative. Ultimately its significance is symbolic. “While thousands have visited the refuge,” says Jimmy Fox, “millions more who will never come find satisfaction, inspiration and hope in just knowing it is there.”