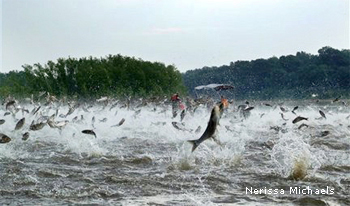 The fifth annual Redneck Fishing Tournament last August had dozens of small boats pulling away from the Boat Tavern in Bath, Illinois, for an Illinois River fishing contest in which no one was permitted to use a fishing rod, though nets were perfectly fine. During the two-day tournament, contestants captured 3,288 Asian carp.

One team alone brought in 493—the largest of which weighed more than 25 pounds. All the fish jumped into a boat or were scooped out of the air with landing nets.

The Redneck Fishing Tournament was started in 2006 by Boat Tavern owner Betty Ford in an attempt to focus national attention on a developing environmental disaster—silver and bighead carp from Southeast Asia that have invaded Midwest rivers and that may soon move into the Great Lakes, where experts already have tallied more than 180 exotic species from around the world.

If the fish reach the lakes, they could wreck the $5-billion commercial and sport fisheries that the governments of two nations have spent 40 years and hundreds of millions of dollars trying to protect.

1.) What Are These Threatening Fish?

Four species of Asian carp have invaded the United States—bighead, silver, grass and black. Of these, the greatest threats to U.S. waters are the silver and bighead, which grow to about 70 and 110 pounds, respectively, in their native southeast Asian waters.

Silver carp attract the most media attention, because they leap 10 to 15 feet out of the water when spooked by boats —or at least they do in U.S. waters; they don’t engage in such pirouettes and double axels in their native Asian range. Bighead carp rarely leap, even in the United States. Several boaters have suffered injuries from leaping silver carp, including broken jaws, noses, ribs, arms and legs after being hit by flying carp. Dozens of carp may blast into the air at once, giving anglers a chance to net them from mid air.

Neither species will bite a baited hook. They feed by sucking up nearly half their own weight in algae and tiny aquatic animals every day. The fish can breed rapidly. A female big-head carp may produce 1.9 million eggs yearly, and up to 3 percent of them may become adult fish. The carp are fast growers, too.  Silver carp in captivity have reached 12 pounds within a year.  This rapid growth allows them quickly to reach a size at which they are too big to fall prey to predators, such as walleye. Moreover, when young they tend to live at the surface of rivers, while local predators hunt in deeper water, allowing the carp to evade an important biological control.

Arkansas commercial fish farmers imported bighead and silver carp in the early 1970s to eat fishpond algae. When the Mississippi River flooded the ponds in the 1980s, carp escaped (some authorities believe that fish farmers also deliberately released carp that had grown too large). Jerry Rassmussen, a U.S. Fish and Wildlife Service biologist, warned his bosses about the escapes and the threat nearly 20 years ago, but his warnings were largely ignored. Officials in the states where the fish escaped also paid little attention because the aquaculture industry had a lot of political clout and resisted any efforts to impose strict regulations. Asian carp were still escaping from flooded Missouri fish farms in 1994.

3.) How Dangerous Are Silver and Bighead Carp?

If they reach the Great Lakes, the carp could jeopardize sport and commercial fisheries that yield the region an indirect economic impact as great as $23 billion. Fisheries scientists fear the carp could completely disrupt the Great Lakes food web. Everywhere they have turned up, Asian carp have stifled native species—including bass, crappie, bluegill, buffalo fish and catfish—and taken over rivers. About 80 percent of the commercial fishermen on the Illinois River quit after carp eliminated most local buffalo fish and catfish.

4.) How Can Asian Carp Get into the Great Lakes?

The carps’ gateway to the Great Lakes is the Chicago Sanitary and Ship Canal, which connects Lake Michigan with the Illinois-Mississippi River system. Some people fear that a temporary electric barrier or fence at one end of the canal was ineffective and that the carp already have reached the Great Lakes. The U.S. Army Corps of Engineers, which runs the fence, admits that the agency has sometimes turned it off for maintenance and construction because of design errors that threatened the safety of passing barges. The fish have been seen in the Chicago Canal about 6 miles from Lake Michigan and have turned up in Lake Calumet, which lies within Chicago city limits. Since 2000, anglers in eastern Lake Erie, about 900 miles from Chicago, have caught adult bighead carp up to 50 pounds each. The origin and ecological significance of these fish remain unknown.

In an ironic twist, commercial fisheries may be adapting to the carp and could complicate measures to control them. About three years ago a few fishermen began netting Asian carp for sale to markets in Asian neighborhoods around the continent. Schafer Fisheries in Thomson, Illinois, for example, sold more than 2 million pounds of Asian carp in 2005. Such commercial development is the last thing biologists want to see, fearing that if Asian carp become commercially valuable, people who make money from them will oppose their eradication.

5.) How Do We Keep Asian Carp Out of the Great Lakes?

The U.S. Army Corps of Engineers is studying methods for keeping carp out of the Great Lakes, and Congress is in the process of speeding up the research. Meanwhile, the Corps also is constructing another electric fence in the Chicago Canal System. However, such fences are not 100 percent effective.

The only permanent solution to carp invasion is separation of the Great Lakes from the Mississippi River basin, which also could make the region more globally competitive in the economic arena, upgrade waste- and storm-water treatment, create jobs, reduce business costs and improve water quality, tourism and recreation.

Keep Asian carp at bay, beginning with intense monitoring and installation of additional barriers.
Pressure government agencies to take measures, such as building walls and mesh fences, that will keep carp from washing into Lake Michigan when rivers flood; particular emphasis is put on controlling floods in Indiana’s Wabash River, from which Asian carp could reach Lake Erie.
Separate Lake Michigan permanently from the Mississippi River, the only way to block the movement of aquatic species between the two watersheds forever and the only way to ensure that the Great Lakes remain carp free.
NWF recently succeeded in an important aspect of its battle to keep Asian carp out of the Great Lakes. At the request of NWF and its partners, the Obama administration has created a new position at the Council of Environmental Quality: the Asian carp director, who will coordinate all federal and state efforts to stop the fish from colonizing the Great Lakes. The administration appointed Indiana Wildlife Federation executive director John Goss to the new post. NWF staff will work closely with him in the future.

TAKE ACTION: Speak up to stop the Asian carp invasion >>

For more on the Redneck Fishing Tournament, watch the video below: