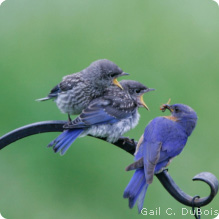 Have you noticed how some backyard birds behave differently from others—even if they’re the same species? Scientists have noticed, too, and over the past decade, an avalanche of research has revealed that individual birds as well as other animals have unique personalities.

One definition of personality—at least as applied to humans—is “the characteristic pattern of thoughts, feelings and behaviors that make a person unique.” But can nonhuman animals also have personalities? While animal behavior is generally easy to observe and measure, assessing an animal’s “thoughts” and “feelings” is difficult at best. That’s one reason researchers long rejected the concept of unique personalities in animals.

The tide turned a little more than a decade ago. The first time scientists applied the term “personality” to a nonhuman in a major scientific journal was in 1993—in reference to an invertebrate, the octopus.

“Anybody who watches animals knows they vary,” says Cornell University biologist Janis Dickinson. Dickinson was first impressed by differences among individual birds while studying western bluebirds as a post-doctoral student at the University of California–Berkeley.

“We were out in Carmel Valley trying to band birds,” she recalls. “We had traps that let a piece of Plexiglas fall in front of the nest box entrance after the bird was inside. Sometimes, I would make a mistake, and the bird would escape. With some birds, you’d reset the trap, stand back, and they’d go right back in the box. Other birds, once they realized something was different, would sit on top of the box with food in their beaks, but refuse to enter.”

Scientists still have plenty of questions about animal personality. For example: Is its primary source genetic or environmental?

The case for nature: A team of European scientists has found evidence for a “curiosity gene” in the great tit, a tiny songbird much like our North American chickadee. The researchers released newly fledged tits into a large room with wooden perching posts, then measured how long it took each bird to perch on each post. In a separate test, they placed an unfamiliar object (a Pink Panther doll) in a bird’s cage and watched to see if the bird hung back or hopped over to check it out, and how long that took.

They also worked up each bird’s genetic profile, focusing on a gene, dubbed Drd4, which controls the structure of a dopamine receptor in the brain. It turns out that birds with the curiosity variant of the gene were the most willing to explore new objects. Tests of great tits in the wild have yielded the same results.

The case for nurture: A research team from the University of Memphis watched mother Florida scrub jays on the nest to evaluate how attentive they were to their hatchlings. Shortly after, they took blood samples from baby jays to measure the stress hormone corticosterone (CORT) and found the highest levels in nests with the least attentive mothers.

About seven months after the birds fledged, they trained them to come to a pile of shelled peanuts, then rigged up a series of tests to gauge each bird’s boldness. Though the researchers have tested just ten birds so far, “we were blown away when we dug up the CORT data,” says University of Memphis scientist Stephan Schoech. “CORT levels in nestlings predicted how fearful birds were some seven months later.” 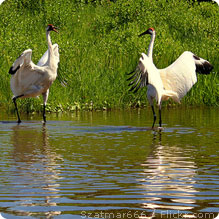 Personality research is more than an esoteric exercise. In the 1970s, George Archibald, former director of the International Crane Foundation, pioneered captive-breeding programs for endangered birds like the whooping crane. When thinking about good matches, what did the biologist consider? It sounds like an ad for eHarmony: “We looked at their personalities,” he says.

“Sometimes a normal bird will pair with a real gimpy bird,” says Archibald. “And age is not important—an older bird will pair with a much younger bird.” What an aggressive female needs is a male who is even more aggressive. “Unless she is submissive to the male,” says Archibald, “there is a possibility she won’t experience the hormonal changes that allow her to lay eggs.”

HOW BOLD ARE YOUR BIRDS?

Backyard birders are helping researchers at the Cornell Lab of Ornithology study the personalities of eastern, western, and mountain bluebirds, tree swallows, black-capped chickadees and other cavity-nesting species. By signing up for NestWatch, a national nest monitoring project sponsored by the lab, you can participate in this experiment. To find out more, go to www.nestwatch.org.