Birds of Peace in a Place of Danger

Thousands of imperiled cranes are finding an unlikely seasonal haven in the Korean Demilitarized Zone, and therein lies the problem 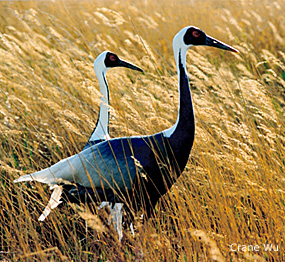 ON THE KOREAN PENINSULA, the Demilitarized Zone is a peculiar kind of oasis. After the cease fire that halted the Korean War in 1953, this two-and-a-half-mile wide, 155-mile long ribbon of land, which had been populated for more than 5,000 years, became a “no-man’s land.”

In the absence of farming, the prairies and scrub native to the western portion of the DMZ, as it is called, and the thick forests in the more mountainous eastern section, eventually grew back. Soon after, some of the wildlife that had vanished from the area also returned, including two of the world’s rarest birds: the white-naped crane (left) and red-crowned crane. Both are among the 10 species of crane—out of 15 that range worldwide—on the IUCN Red List of Threatened Species.

That the cranes, traditionally considered birds of peace, should inhabit one of the most dangerous places on Earth is an irony not lost on George Archibald. “It’s quite extraordinary,” says the noted biologist and cofounder of the International Crane Foundation (ICF) in Wisconsin who has worked to conserve cranes in the DMZ since the 1970s. But for Archibald, the birds’ use of the zone, while inspirational, is problematic.

The Cheorwon Basin in the DMZ’s central highlands provides winter habitat for about a third of the world’s 2,800 red-crowned cranes and half of the 5,000 or so remaining white-naped cranes. Small numbers of both species winter in the Han River Estuary in the western portion of the DMZ. Archibald believes the birds’ reliance on these areas is unsustainable. “If and when North and South Korea should reunite,” he says, “there are going to be huge development pressures on the DMZ.”

The Han River Estuary is a likely candidate to become a huge shipping port; the Cheorwon Basin, a reunification city. For their long-term security, says Archibald, the cranes inhabiting the DMZ must be reintegrated into the peninsula’s other environments. But for that to happen, he adds, it is important to solve some of the problems that brought the cranes to the demilitarized zone in the first place.

Recent research has shown the importance of unplowed rice fields for wintering cranes in Asia, and the rice fields of the Cheorwon Basin that border the DMZ are among the few places where the birds have unfettered access to such food. In South Korea, a buffer area several miles wide abuts the DMZ. While few people are allowed to live in this area, farmers can cultivate rice there. With the introduction of modern machinery, though, many of those farmers have started to move away from traditional growing practices. They no longer leave fields unplowed during the winter months; instead, they tend to plow immediately after harvest, depriving cranes of a once-reliable food source.

The birds have not fared any better to the north. “The North Korean farm system was built on a high-energy and high-fertilizer model,” says Randy Ireson, former coordinator for North Korean programs with the nonprofit American Friends Service Committee. North Korea has to import all of its liquid fuel, petroleum and natural gas supplies, and for many years it depended on the Soviet Union and China to fulfill those needs. But when the Soviet Union collapsed in the early 1990s and China began to experiment more with free-market economic policies, the North Korean government no longer could get fuel and food for the “friendship prices” it was accustomed to receiving.

Because of those privations and the fact that North Korea had ravaged its farmlands with chemicals, crop yields in the country plummeted from seven or eight tons per hectare to two to three tons. Although exact numbers are unknown—North Korean hospitals were forbidden from listing “starvation” as a cause of death—observers estimated that between 650,000 and 2.6 million people died in the resulting famine.

During this time, in the mid-1990s, Archibald’s South Korean colleagues first noticed an increase in the number of cranes wintering in the DMZ. “We saw the population of red-crowned cranes jump there from 300 to 800 over the course of a few years,” he says. Archibald wasn’t sure where the birds were coming from until another colleague told him about the Anbyon Plain on the east coast of North Korea, which once hosted a wintering population of about 250 cranes. Those animals had disappeared from the site and were presumed to have moved to the DMZ.

Archibald saw an opportunity—and a way to help more than just cranes. “George knows that you can’t conserve birds without helping the people that live near them,” says Hall Healy, president of the DMZ Forum, a U.S.-based organization that has worked on conservation efforts with the ICF. The two groups joined forces with Korea University in Tokyo and BirdLife International–Asia to develop a program to restore red-crowned cranes as winter residents in North Korea.

At a 2005 meeting in Beijing attended by scientists from North and South Korea, China, Japan, Mongolia and Russia, Archibald proposed a project to bring cranes back to the Anbyon Plain. But rather than working just to restore habitat, he proposed that the project also teach North Korean farmers organic techniques and provide them with equipment. Then after the harvest, the Pyongyang Zoo in North Korea would provide a pair of red-crowned cranes to serve as a lure for migrating wild cranes. Authorities in the Pisan Farm Cooperative on the Anbyon Plain agreed to share their food with the birds in return for help enhancing crops and reducing erosion.

Three years later, Archibald visited the plain with William Duckworth, a British ornithologist. With help and materials from sources in Japan and China, and funding from Dr. Han Sang Hoon of South Korea and others, the two scientists developed a plan to help both the farmers and the cranes that is now viewed as a model for similar projects throughout the region. “The biggest question now is future funding,” says Archibald.

After his trip to North Korea in 2008, Archibald didn’t know how, when or even if the cranes would return to the Anbyon Plain. Last November, he got the answer he was waiting to hear.

While boarding a flight from India to the United States, he decided to check his email one last time before takeoff. That’s when he saw a message from two of his North Korean contacts, who had good news: On November 12, 22 migrating red-crowned cranes had stopped at the rice fields in the Anbyon Plain and harmonized with the pair borrowed from the Pyongyang Zoo—the first time the birds had visited the area in more than a decade. The next day, the message continued, 41 cranes were counted at the site.

The email also included photographs showing a dull gray sky and shrouded buildings, which served as a backdrop to brown fields, harvested but unplowed. In the middle of the fields stood the cranes, foraging and milling about as if they had never left. “Those photos,” says Archibald, “really brightened what was otherwise going to be a very long, boring flight home.”

Journalist Eric Wagner is based in Seattle.