Coyotes Living Large in the City

Coyotes are cozying up to humans in cities across the nation. 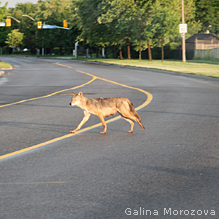 The Wild Dog That’s Moving In

Coyotes!  From coast to coast they’ve become a fact of life in American cities. They howl in downtown Chicago, trot across Wilshire Boulevard in Beverly Hills and dig dens in and around Tucson, St. Louis, Boston, Detroit and Washington, D.C. Coyotes born and raised in cities prefer cities, says wildlife ecologist Stan Gehrt of Ohio State University, who has radio-collared nearly 200 coyotes in the Chicago area during the past six years. “It’s not a matter of coyotes being pushed out of better habitat and into a city. For the majority of these animals, they’re home. They’re where they want to be.”

Hey, Don’t Be Frightened
While these four-footed neighbors are bound to make some city dwellers nervous, Gehrt and other wildlife experts say there’s no reason to be afraid. “At this point, all cities have them,” says Matthew Gompper, a wildlife biologist at the University of Missouri. “Urban coyotes are probably much more common than people realize.” Most coyotes stay away from people; it’s something every pup learns to do.

How Many Coyotes Live in American Cities?


No one knows. The total number of city coyotes in the United States could be anywhere from one million to ten million.


Is a City Any Place for a Coyote?
A modern city might at first seem like a pretty bizarre place for a coyote to live in. Not so, says Paul Krausman, a University of Arizona wildlife biologist who is studying two groups of coyotes in downtown Tucson. “Coyotes are one of the most adaptable species on the face of the Earth,” he says. “In urban areas, they’ve got everything they need. There are no wolves or mountain lions, so they’re at the top of the heap. People are throwing out garbage for them to eat, and they’re watering their lawns, which attracts prey species. It’s a perfect setup.”

How Dangerous Are Coyotes to People?

Coyotes very rarely attack humans. In southern California, over the past 25 years especially, some coyotes have become too brave, prowling in the daytime and even following people walking small dogs, as if they were hunting the house pets. Only one person in that area is known to have been killed by a coyote—a young girl attacked in suburban Glendale in 1981.

Still, biologists believe that coyotes can become dangerous if they get too used to humans. Open trash cans, overfilled bird feeders and outdoor pet bowls have been part of the problem. In many cases, however—including that of the Glendale animal—they are fed intentionally as part of a homeowner’s misguided nature-watching strategy.

The key to getting along with coyotes is: Don’t undo what coyotes have learned so well. Feeding them, for example, can make them unafraid of people, and then the problems begin.

Tips on Living with Coyotes

City coyotes are here to stay, so people need to learn how to get along with them. These doglike creatures can make perfectly good neighbors as long as they don’t lose their natural fear of humans. Some tips: 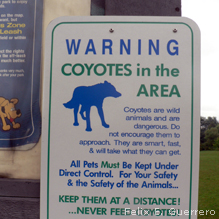 Don’t feed coyotes! Avoid overflowing bird feeders and open compost bins.
Obey leash laws. Small dogs on the loose are attractive prey for coyotes, especially at night. Cats? Keep them inside, along with pet food bowls. In dry climates, even a water bowl can draw coyotes.
Keep all garbage containers closed and inaccessible. Adding ammonia or pepper spray to trash can discourage rummaging by coyotes and other wildlife.
Don’t invite coyotes to build dens next to (or under) your home: Seal crawl spaces, close sheds and thin brushy areas.
Even if you love seeing coyotes, don’t let them know it. If a coyote visits your yard, wave your arms, shout, spray it with a hose. Be a threat!
Adapted from "City Slickers" by Doug Stewart, National Wildlife , October/November 2006.

Further Reading on Coyotes and Their Kin