Just as scientists are beginning to answer basic questions about migration, many migratory birds and other animals are in trouble 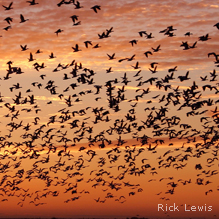 Are you starting to see some of your favorite birds come back from their wintering grounds? As the seasons change, many bird species come and go in the natural phenomenon of migration. Today, scientists are just beginning to answer some of the most basic questions about migration. But a shadow hangs over their research: Many migratory birds---and other migratory animals--are in trouble.

What is migration?  Many creatures wander, but only some are true migrants. Most biologists define migration as repeated seasonal movement between breeding and non-breeding grounds by the same individuals.

How far do birds migrate? Thanks to tracking devices, we now know the astounding distances that some migrating species travel. For sheer distance, nothing beats migrating birds. Sooty shearwaters astonished scientists by flying more than 40,000 miles in a loop from New Zealand to Chile, Japan, Alaska and California before a trans-Pacific trip back to New Zealand. The birds averaged more than 200 miles per day for 200 days.

Longest Known Non-stop Bird Flight: The real migration champ was a bar-tailed godwit that flew 6,340 miles nonstop between New Zealand and North Korea, where it rested briefly before continuing nearly a thousand additional miles to its breeding grounds in Alaska.

HOW DO BIRDS FIND THEIR WAY?

There are a range of techniques migrating birds use to navigate:

* Earth’s magnetic field: This was discovered by a series of experiments in the mid-1970s which reversed magnetic fields around songbirds, triggering them to fly the wrong direction. It is now known that some 50 species including birds follow magnetic pathways.
*Circadian clocks: innate temporal rhythms in the biochemical, physiological or behavioral processes of all living things, from plants to birds
*Internal compasses: Using the sun or stars as a compass to determine direction
*Smells: Some birds, including pigeons, use olfactory clues to find their way.
*Geographical features such as mountain ranges and coastlines. Most migrants seem to rely on a combination of these techniques depending on conditions.

WHY SCIENTISTS NEED TO UNDERSTAND MIGRATION
“The nonbreeding season drives a lot of what happens during rest of the annual cycle,” says Peter Marra, a research scientist at the Smithsonian Migratory Bird Center at the National Zoo. That cycle’s middle stages—the actual travel—remain terra incognita to scientists. The sheer number of habitats used at different points during migration presents a formidable challenge to conserving migratory birds.

NEW TECHNOLOGIES TO STUDY MIGRATION
The recently announced ICARUS Initiative will launch a satellite devoted to migratory animals and develop tiny, powerful transmitters that will allow researchers to follow creatures as small as insects across broad stretches of time and space.

WHAT ARE THE THREATS TO MIGRATORY BIRDS?
*Habitat loss and degradation. The habitats of migratory species nearly everywhere are under pressure from deforestation, farming and expanding human populations. Human-made obstacles also hinder travel. In many cities, skyscrapers, for example, kill migratory songbirds.
* Global warming.  Researchers are reporting new behaviors among migratory animals worldwide that may stem from changing climate—shifts in breeding ranges, mistiming of cues and departures, for example. “Since the wintering habitats are changing at different rates than more northerly habitats, things can get really of out sync,” says the Smithsonian’s Marra.

Out of whack: In the Netherlands, some populations of pied flycatcher have crashed because the birds are arriving from African wintering grounds too late to feast on a once predictable bounty of caterpillars. Higher springtime temperatures in Europe are causing the insects to hatch earlier than they once did.

CAN MIGRANTS ADAPT?
No one knows. Recently, some birds have shown flexibility by changing routes or timing or breeding sites in response to new environmental conditions. In the Midwest, for instance, ducks are arriving later in the fall and resting longer before continuing south, perhaps in response to higher temperatures.

Along the east coast of Massachusetts, where temperatures are rising and the insects on which birds feed on hatching sooner, 8 of 32 migratory songbirds looked at have begun arriving earlier from their wintering grounds—primarily species that winter in the southern United States as opposed to farther away in the Tropics.

“But I think it would be dangerous to assume that all species can adapt,” says Princeton University ecologist David Wilcove. As Wilcove writes in his book No Way Home: The Decline of the World’s Great Animal Migrations, “The irony is that just as the phenomenon of migration is slipping away, we are entering a golden age for studying it.”

Learn what NWF is doing to protect birds and other wildlife from the effects of global warming.
Find out the top 10 things you can do to help migratory birds.
Visit our birds and birding archives.