Lessons in a Fairy House 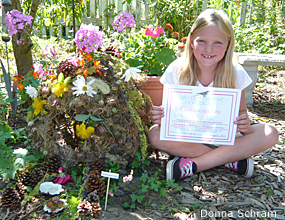 In July, National Wildlife Federation certified Skagit Valley, Washington, as a Community Wildlife Habitat—the 45th in the country and the tenth in The Evergreen State to earn this distinction. While the volunteers that led the certification effort focused primarily on maintaining and restoring wildlife habitats, they also promoted activities designed to enhance what team leader Donna Schram calls “the childlife of our community.” Sample activities include seed-starting, hanging homemade bird feeders and building fairy houses—with a message.

“Shortly after we registered with the National Wildlife Federation in the summer of 2007,” writes Schram, “one of our members suggested that we review The Fairy Houses Series, a set of children’s books and a DVD intended to connect kids with nature. The books encourage children to build small structures from natural materials—stones, sticks, evergreen needles, leaves, driftwood, shells, moss, sand, spent flowers, nuts, seaweed—and their imaginations. We were delighted with the idea of fairy house construction, but decided to take the activity one step further. We wanted the children’s houses to incorporate the four elements needed to sustain wildlife in backyard habitats—food, water, shelter and places to raise young.”

The fairy houses themselves met the team’s requirements for shelter and places to raise young. Water and food items, such as seeds and berries, were “usually offered in seashells or nutshells,” says Schram. Once children included the four habitat elements in their design, they were presented with a certificate and a small “Wildlife Sanctuary” sign to place in front of their houses. More than 300 miniature habitats were built at community events.

“The Skagit Valley Community Wildlife Habitat team’s fairy house project is such a creative way to teach children about what wild animals need in their habitat,” says Roxanne Paul, NWF’s senior coordinator of community and volunteer outreach. “Children are much more likely to remember lessons from a hands-on experience. Hopefully they will look in their own backyard or schoolyard and think about how they can better provide for the wildlife in their community.”

Readers who construct fairy houses are invited to upload images to the National Wildlife Magazine Photo Group page on Flickr. Tag your photos FH-NW10 so we can see!