Some of the nation's top birders share their favorite destinations 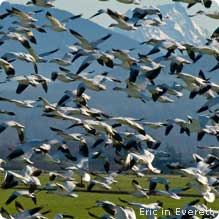 Want to check out some of the best bird-watching spots in North America this fall? We asked eight of the nation’s top birders to share their favorite places for watching the great avian spectacle of fall migration. Their destinations span the continent—and provide an assortment of options for a bird-packed getaway.


Ornithologist Paul Johnsgard, an emeritus professor at the University of Nebraska–Lincoln, has spent 42 years "drinking in the sights and sounds" of migrating snow geese. "There are lots of places in the Great Plains to watch snow geese, and I’ve probably been to all of them." But Squaw Creek is a favorite, he says: "This is classic Great Plains marsh—natural-looking habitat, where you feel that the geese are in the right place."

Marshlands dominated by cattails and American lotus form the heart of the 7,350-acre refuge, which is ringed by oak-hickory forest. Honking streams of snow geese en route from their North Dakota nesting grounds to southern wintering areas touch down here starting in early October. To learn more about the refuge, visit http://midwest.fws.gov/SquawCreek.


Jutting south into Lake Erie, Point Pelee is the southernmost extension of Canada’s mainland. Most birders come here in spring, hoping bad weather will force northbound migrants to bail out on the first bit of land they encounter. Bird expert and field guide author Kenn Kaufmann prefers to come in fall, when the birds are equally abundant but you don’t have to shoulder so many people aside to see them.

Early September is a good time to visit. Weather makes a difference in what birds you’ll see. "I have the best success on days with clear skies in the wake of a cold front," says Kaufmann. "Warblers of all kinds are going through—blackpoll, bay-breasted, Blackburnian—really good variety!" To learn more, visit http://parkscanada.gc.ca/pn-np/on/pelee/index_E.asp.


During autumn migration, Santa Ana’s 2,088 acres along the Rio Grande River is the favorite destination of Father Tom Pincelli, an avid birder and pastor at Saint Anthony’s Church in Harlingen, Texas. The refuge is located at an "ecological crossroads," where subtropical, Gulf Coast, Great Plains and Chihuahuan Desert climates come together.

Within its borders, Santa Ana offers a stunning variety of birds—nearly 400 species. About half are residents. The rest are migrants passing through as they follow the Central and Mississippi Flyways on their way to Central and South America. Waves of raptors, waterfowl and shorebirds show up at Santa Ana in fall. To learn more, visit www.fws.gov/refuge/santa_ana/.


Some of the bird species native to Mexico’s Sierra Madre can also be found farther north, marooned on little "sky islands" of habitat—the mountain peaks of southeast Arizona. "Here you can see birds that occur nowhere else in the United States," says naturalist Sheri Williamson, director of the Southeastern Arizona Bird Observatory.

"On a typical late-August morning this place is swarming with hummingbirds," Williamson says. Common visitors include rufous, calliope and broad-tailed hummingbirds. But you may also spot rare species such as violet-crowned and Lucifer hummingbirds. Also watch for flocks of lazuli buntings, warblers and flycatchers. To learn more, visit http://sabo.org.


Thanks to geography, Cape May Point is a migration hot spot, says Pete Dunne, a writer, avid birder and director of the New Jersey Audubon Society’s Cape May Bird Observatory. That’s because the point is a bird’s last chance to rest and refuel before making the 14-mile flight south over Delaware Bay. When the weather’s unfavorable for flying across open water, vast flocks of migrants get "bottled up" at the point.

This can lead to exciting sightings. Once, Dunne saw a group of 80 northern harriers take flight together. It’s possible to spot 14 raptor species in a single day—sometimes in startling proximity. The point is also a hotspot for migrating warblers, sparrows, thrushes and owls. To learn more, visit http://www.birdcapemay.org/.


It’s called the Sunrise Coast because the sun’s rays first touch the United States there each morning. The bird-watching in fall is just as spectacular as the sunrise views, says former NWF Chief Naturalist Craig Tufts. In northern Maine, boreal forest is juxtaposed with seacoast, which means birders can see not just clouds of migrating shorebirds but also resident "specialties," such as spruce grouse that live here year-round.

Tufts likes to visit in early September, when the weather is still good and seabirds are on the move. He heads first for Quoddy Head State Park. "If the weather has been right, there should be waves of migratory land birds coming through," says Tufts. Scan the trees for warblers, but keep an eye cocked toward the water for chance sightings of common eiders and bald eagles. Tufts also recommends a visit to nearby Cobscook Bay State Park to look for boreal birds like the black-backed woodpecker and boreal chickadee. For learn more, visit www.state.me.us/doc/parks.

Civil engineer and birding enthusiast Guy McCaskie specializes in vagrants—the birds that shouldn’t be there. His favorite fall birding spot is Point Loma, not far from San Diego: "It sticks out in the ocean a bit, so it concentrates migrant land birds in the fall." Years of experience have brought him to expect semi-rarities like American redstarts and black-and-white warblers that have accidentally wandered from the East Coast. Plus the occasional "super-rarity," such as a little bunting—a sparrowlike species that breeds in Siberia.

McCaskie expects to see lost birds on Point Loma any time from the first of September to the fifteenth of November. Good places to look for them include Fort Rosecrans National Cemetery and Cabrillo National Monument.


Horicon Marsh is the largest freshwater cattail marsh in the United States. "In fall, I’ve seen a hundred or more species in a day, no problem," says George H. Harrison, a photographer and author of 13 books on birding. They include: 18 to 20 duck species, a good variety of shorebirds and raptors, and huge flocks of Canada geese. Some 200,000 geese splash down here each year.

A visit in early October is optimal for several reasons, says Harrison. For one thing, hunting season hasn’t opened yet, so waterfowl are less nervous and remain closer to the highway. Also, naturalists staff the marsh viewing platforms during the refuge’s annual fall festival. To learn more, visit http://midwest.fws.gov/Horicon.