Looking at lightning bugs is a great summer activity, and your observations can help scientists track the fate of these insects 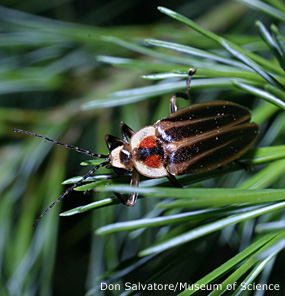 ON JUNE 3 at about 11:30 p.m., I glanced out the window while brushing my teeth. To my surprise—and delight—I noticed a series of bright flashes. My first firefly sighting of the season!

Since then I’ve seen more of these remarkable insects both at dusk and at night. Have you spotted any in your backyard? Whether you have or not, sharing your observations can help researchers better understand these beloved creatures.

In 2008 the Museum of Science in Boston launched Firefly Watch, its first-ever citizen science program. A question often asked by visitors inspired its creation: Where are all the fireflies?

“People would come up to me and say, ‘There aren’t as many fireflies around as when I was a kid. Are they disappearing?’” relates program coordinator Don Salvatore, a science educator at the museum for more than 30 years. “The truth is, we don’t know. But that’s what we’re trying to find out.” And that’s where wildlife-watchers like you and me come in.

By collecting data for Firefly Watch, we’re assisting the museum and its research partners at Tufts University and Fitchburg State College in their efforts to learn about the geographic distribution and summer activity of lightning bugs. In addition, data gathered over time may help prove—or disprove—the assumption that factors such as pesticide use and light pollution have negatively impacted populations.

Even without knowing how human actions influence firefly numbers, individuals can garden with the insects in mind, says Salvatore. “It’s reasonable to think you’re not hurting them, and you may even be helping them,” he says, by taking these steps:

Leave areas of your lawn unmowed to preserve habitat. Fireflies can spend a lot of time on the ground, particularly during the day.

Limit or eliminate your use of pesticides, which may harm lightning bugs and other non-pest species.

Turn off outside lights. Most fireflies find mates by exchanging flashes; a bright background may make it difficult for them to communicate.
Safe Handling

Salvatore also offers tips for handling lightning bugs to those who want to catch them for an up-close look:

Don’t touch fireflies if you have insect repellent on your hands. Use a net, if available.

If you put lightning bugs in a jar, include a piece of moist paper towel to keep the container humid; fireflies are susceptible to drying out.

Let fireflies go as soon as you’ve gotten a good look so they can get back to the business of locating mates.