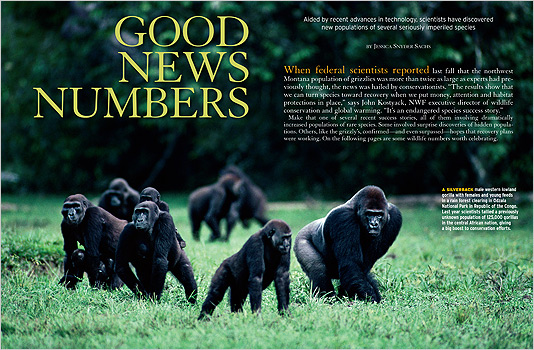 Here's some good news!  Scientists have recently made a number of exciting discoveries - all of them involving dramatically increased populations of rare species. For people concerned about these imperiled species, these five  success stories are certainly worth celebrating.

Gorilla conservationists last year discovered more than 125,000 western lowland gorillas in a remote area of Congolese rainforest. Scientists had long thought that the almost impenetrable wilderness was home to gorillas, but the number discovered there surprised even the researchers.

“These figures show that northern Republic of Congo contains the mother lode of gorillas,” says Steven Sanderson, president of the Wildlife Conservation Society, which sponsored the study.

Indeed, the discovery more than doubles previous estimates of the entire world population of western gorillas, which scientists had pegged at between 50,000 and 100,000. The thick jungle that hid the newly discovered population cannot be relied on to protect them, study leader Emma Stokes says. The population is on the front line of the next predicted Ebola outbreak, a disease that has been killing off gorillas in recent years. Moreover, the population’s habitat is being bought up by mining and logging companies.

The good news is that the discovery has renewed the Congolese government’s interest in establishing a national park that could encompass much of the newly identified gorilla homeland. Also, the Wildlife Conservation Society is working with scientists to develop a gorilla Ebola vaccine and an effective way to administer it.

Long-billed curlews—the giants of North American sandpipers—tops the U.S. Fish and Wildlife Service (FWS) list of grassland birds of special concern, with a designation of “highly imperiled” (the most dire of five rankings). Once abundant across the Great Plains, these birds need short-grass and mixed-grass prairie for nesting—just the kind of habitat that has been plowed under for farming.

Long-billed curlews also have lost much of their winter habitat along the California coast. Still, up until last year no one knew how many long-billed curlews survived, with guesstimates ranging as low as 20,000.

Stephanie Jones, an FWS biologist, recently ran a field survey involving more than 100 participants to estimate curlew numbers accurately.  Her project involved more than 100 U.S. and Canadian biologists and volunteer bird watchers who used a kind of random sampling similar to that used by pollsters to predict presidential elections. From the field reports, Jones and her colleagues came up with a population estimate of more than 160,000 long-billed curlews.

That’s good news even though the species remains of special concern owing to the continued destruction of its habitat, Jones says. One major improvement: The new survey results will allow government agencies and conservation groups to concentrate their curlew protection efforts in key habitat areas, making their work more efficient. 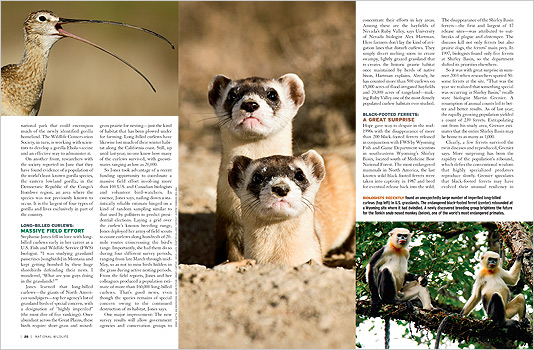 3. Black-footed Ferrets: Lost and Then Found

Hope gave way to despair in the mid 1990s with the disappearance of more than 200 black-footed ferrets released in cooperation with FWS by Wyoming Fish and Game Department scientists in southeastern Wyoming’s Shirley Basin. The most endangered mammals in North America, the last known wild black-footed ferrets were taken into captivity in 1987 and bred for eventual release back into the wild. The disappearance of the Shirley Basin ferrets—the first and largest of 17 release sites—was attributed to outbreaks of plague and distemper. The diseases kill not only ferrets but also the prairie dogs that make up the bulk of their prey. In 1997 biologists found only five ferrets at Shirley Basin, so the department shifted its priorities elsewhere.

A Big Ferret Surprise: So it was with great surprise, in summer 2003, that researchers spotted 50-some ferrets at the site. A resumption of annual counts led to better and better results. Last year’s count turned up 239 ferrets in a limited sampling area. Based on this figure, FWS biologist Martin Grenier estimates that the entire Shirley Basin may be home to as many as 1,000.

Clearly, a few ferrets survived the twin diseases and reproduced, Grenier says. More surprising has been the rapidity of the population’s rebound, which defies the conventional wisdom that highly specialized predators reproduce slowly. Grenier suspects that black-footed ferrets may have evolved their unusual resiliency in order to survive the boom-or-bust cycles of prairie dog populations.

“As exciting as the news is for Shirley Basin,” Grenier cautions, “we’re still struggling to have similar success stories elsewhere in North America.”


4. A Bounty of Eastern Bowhead Whales

The first signal that eastern bowheads might be doing significantly better came from reports by Canada’s native Inuit people. Admittedly, the Inuit were asking for increased quotas for their annual hunt. But last year, a scientific survey backed up the Inuit reports.

Eastern Bowheads Bounce Back: Using satellite tracking combined with airplane surveys that covered a larger area than previous counts, Fisheries and Oceans Canada has now increased its estimate of the eastern bowhead population to around 14,400 whales. The upgraded numbers remain controversial, admits Fisheries and Oceans Canada marine biologist Pierre Richard. The International Whaling Commission—a cooperative group of nations seeking to manage whales and whale hunting without harm to the animals’ populations—has critiqued the counting method and has revised the estimate to about 6,300 whales. Scientific counts have always been a challenge with this whale, Richard explains. “We’re talking about spotting a black animal on a vast dark sea,” he notes. “The truth may be somewhere between the International Whaling Commission’s 6,000 figure and our 14,000.”

In either case, related reports suggest that eastern bowhead populations may have finally reached a point where they will have a speedier rate of population growth in the years ahead—barring new threats stemming from global warming. 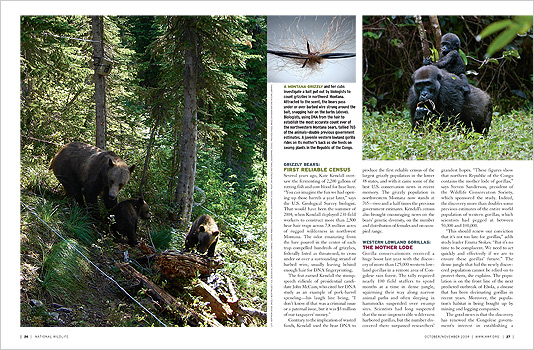 Several years ago, Kate Kendall oversaw the fermenting of 2,200 gallons of rotting fish and cow blood for bear lure. “You can imagine the fun we had opening up those barrels a year later,” the U.S. Geological Survey biologist says. That would have been the summer of 2004, when Kendall sent out 230 field workers to set up more than 2,500 bear hair traps across 7.8 million acres of rugged wilderness in northwest Montana. The odor from the lure poured in the center of each trap led hundreds of grizzlies, federally listed as threatened, to cross under or over a surrounding strand of barbed wire, usually leaving behind enough hair for a DNA sample.

Kendall used the bear DNA to produce the first reliable census of the largest grizzly population in the lower 48 states; with it came some of the best U.S. conservation news in recent memory.

Looking across these success stories, it becomes clear that they share more than encouraging population growth. All five species remain imperiled due to continued environmental destruction. “To be realistic, we can’t judge progress by mere numbers,” Kostyack points out. “We have to do so by looking at how well we’re protecting their habitats.” That, Kostyack says, will depend ultimately on how we tackle the combined threats of global warming and humankind’s expanding effects on the natural landscape.