Are Gorillas on the Verge of Extinction? 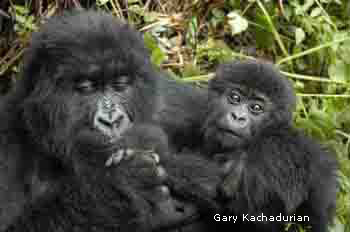 In a newly published study, The Last Stand of the Gorilla: Environmental Crime and Conflict in the Congo Basin, the United Nations Environment Programme (UNEP) and the Great Apes Survival Partnership report that the world’s largest ape species is under renewed threat across the Congo Basin from Nigeria to Uganda. A 2002 UNEP estimate that gorilla habitat free of human impact would be reduced to only 10 percent of the original range by 2032 as a result of continued development is, according to the new report, “too optimistic. Despite some success stories in certain sites, the combination of threats indicates that most of the remaining gorilla populations could become locally extinct by as early as 2020-2025—in little over a decade, unless more substantial action is taken now.” 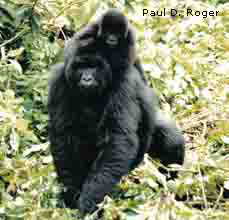 Cross River Gorilla (Gorilla gorilla diehli): found in Nigeria’s Cross River State and in the Southwest Province of Cameroon, it is critically endangered, numbering fewer than 300 animals in 11 subpopulations—a scarcity that makes it the most imperiled gorilla subspecies; the International Union for the Conservation of Nature put the Cross River gorilla on its 2008-2010 list of the world’s 25 most endangered primates.

Mountain Gorilla (Gorilla beringei beringei): also critically endangered, this subspecies, which survives in two distinct populations, numbers only about 700 individuals. One population is found in the Virunga Mountains Conservation Area shared by the Democratic Republic of Congo, Rwanda and Uganda; the other lives mainly in the Bwindi Impenetrable National Park in Uganda.

Eastern Lowland Gorilla (Gorilla beringei gaueri): Probably numbering fewer than 5,000 animals, this subspecies is found only in eastern Democratic Republic of Congo but has increased in number since 1996 surveys; it is the only gorilla subspecies listed as endangered, rather than critically endangered.

• Poaching for meat by local people as well as by militia groups and by commercial hunters who sell the meet to loggers, miners, rebels and others; such killing of wildlife has reduced wildlife populations in general by up to 80 percent in some national parks.
• Logging of the gorilla’s forest habitat, even within protected areas, for the sale of timber and charcoal; much of this activity is controlled by rebel militia groups.
• Mineral extraction, such as the removal of gold and tin.
• Cutting of trees for firewood, used both by growing local human populations and for sale.

According to the UNEP report, “Companies working with or buying indirectly from fronts for the militias are buying minerals, charcoal and timber amounting to 2-10 times the official exports.” Valued at several hundred million dollars, these goods, through resale via a chain of entities, eventually reach Europe and the United States, the report says. Park rangers try to stop illegal hunting and other illegal use of resources but lack sufficient numbers, training and equipment for optimum performance. In Virunga National Park, home of the mountain gorilla, 190 rangers have been killed during the past 15 years (the man in the photo at left has worked as a guard in Uganda all his life).

The report makes the following recommendations for enhancing the odds of gorilla survival:
• Strengthen the UN peacekeeping force now in gorilla range so that it can secure border crossings and stop illegal trade in natural resources;
• Increase coordination among the parks administered by nations that harbor gorillas;
• Mobilize resources for investigating environmental crimes both within gorilla range and in nations, from China to the United States, that receive illegal products from gorilla range;
• Provide funding for judicial training and cross-boundary training of judicial staff in national and international crime in gorilla-range nations;
• Strengthen long-term training programs for park rangers and wildlife managers, particularly in regard to anti-poaching, monitoring, intelligence gathering and crime-scene investigation;
• Promote anti-corruption activities to protect rainforests and mitigate climate change;
• Strengthen collaborative efforts among international enforcement agencies to control illegal trade in wildlife and other natural resources;
• Establish a fund for supporting trans-boundary environmental crime investigation, and
• Improve funding for gorilla research and survey data.