As the continent’s grasslands disappear, the songs of the birds that depend on them are also fading away 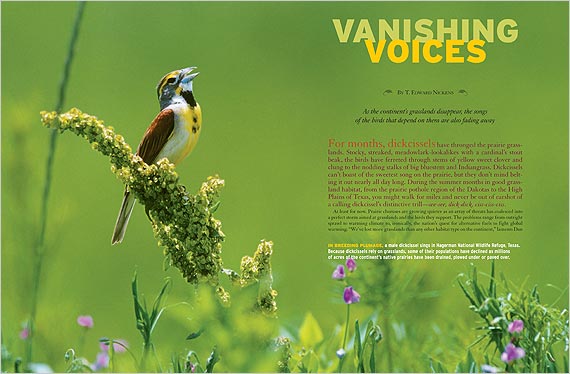 FOR MONTHS, DICKCISSELS have thronged the prairie grasslands. Stocky, streaked, meadowlark-lookalikes with a cardinal’s stout beak, the birds have ferreted through stems of yellow sweet clover and clung to the nodding stalks of big bluestem and Indiangrass. Dickcissels can’t boast of the sweetest song on the prairie, but they don’t mind belting it out nearly all day long. During the summer months in good grassland habitat, from the prairie pothole region of the Dakotas to the High Plains of Texas, you might walk for miles and never be out of earshot of a calling dickcissel’s distinctive trill—see-see, dick-dick, ciss-ciss-ciss.

At least for now. Prairie choruses are growing quieter as an array of threats has coalesced into a perfect storm aimed at grasslands and the birds they support. The problems range from outright sprawl to warming climate to, ironically, the nation’s quest for alternative fuels to fight global warming. “We’ve lost more grasslands than any other habitat type on the continent,” laments Dan Casey, Northern Rockies coordinator for the American Bird Conservancy. “And that extraordinary habitat loss has taken its toll on birds.”

At the time of European settlement, approximately 360 million acres of shortgrass, tallgrass and mixed-grass prairie cloaked the mid-continent from Canada to Mexico, stretching green and gold from the foot of the Rockies to the great deciduous forests of the East. Today, these native grasslands have been plowed and paved and drained into a mere shadow of their former selves: Only about 70 million acres are left. In Iowa, a meager 30,000 acres of native prairie remains of the 23 million acres found in the state in 1780. Half the native prairie in North and South Dakota has vanished. All told, only 3 percent of the nation’s original 167 million acres of tallgrass prairie remain intact.

As the buffalograss and blue grama, prairie clover and dotted gayfeather go, so too does a vast community of birds that are tied to these habitats. Three out of four grassland bird species have declined in abundance over the last 30 years, and the birds have exhibited the steepest population declines of any group of North American birds. Fully 40 percent of the entire continent’s declining bird species are those that depend on grasslands. 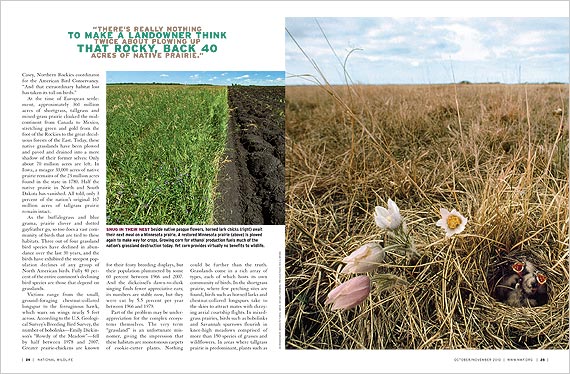 Victims range from the small, ground-foraging chestnut-collared longspur to the ferruginous hawk, which soars on wings nearly 5 feet across. According to the U.S. Geological Survey’s Breeding Bird Survey, the number of bobolinks—Emily Dickinson’s “Rowdy of the Meadow”—fell by half between 1978 and 2007. Greater prairie-chickens are known for their feisty breeding displays, but their population plummeted by some 60 percent between 1966 and 2007. And the dickcissel’s dawn-to-dusk singing finds fewer appreciative ears; its numbers are stable now, but they were cut by 5.5 percent per year between 1966 and 1979.

Part of the problem may be under-appreciation for the complex ecosystems themselves. The very term “grassland” is an unfortunate misnomer, giving the impression that these habitats are monotonous carpets of cookie-cutter plants. Nothing could be further than the truth. Grasslands come in a rich array of types, each of which hosts its own community of birds. In the shortgrass prairie, where few perching sites are found, birds such as horned larks and chestnut-collared longspurs take to the skies to attract mates with dizzying aerial courtship flights. In mixed-grass prairies, birds such as bobolinks and Savannah sparrows flourish in knee-high meadows comprised of more than 150 species of grasses and wildflowers. In areas where tallgrass prairie is predominant, plants such as prairie cordgrass and Indiangrass can tower 8 and 10 feet tall. There, clinging to the tall perches and foraging in dense ground litter, are eastern meadowlarks, along with Henslow’s and Le Conte’s sparrows. And dickcissels. For many of these and other native birds, grasslands simply cannot be replaced.

Yet they are. In easterly regions, grasslands suffer from outright habitat destruction in the form of suburban sprawl. Even remote prairies decline when plants such as western snowberry invade expanses no longer grazed by native buffalo or elk. Many of the threats in central and western states are as plain as an oil rig, although harm comes to grassland birds even when they are seemingly buffered by distance. Sharp-tailed grouse and greater prairie-chickens hesitate to nest near roads or tall structures such as power lines. And the clamor for wind power is worrisome as well. Studies at a southwest Minnesota wind generator site found species richness among grassland birds four times less within 590 feet of each turbine, and it didn’t make any difference whether the blades were spinning.

Converting grasslands to croplands may cause birds the most grief of all. From 2006 to 2007 alone, corn production in the United States increased 19 percent, with nearly one out of every three bushels earmarked for ethanol production. Corn, scientists point out, is one of the worst crops for grassland birds. For starters, most species won’t nest in corn, and corn production requires high inputs of chemical herbicides and fertilizers—bad news for natural ecosystems in general. 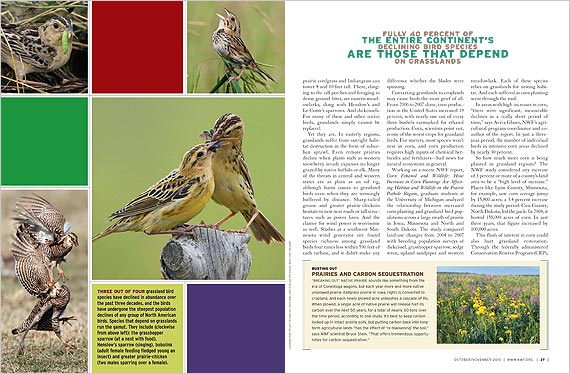 Working on a recent NWF report, Corn Ethanol and Wildlife: How Increases in Corn Plantings Are Affecting Habitat and Wildlife in the Prairie Pothole Region, graduate students at the University of Michigan analyzed the relationship between increased corn planting and grassland bird populations across a large swath of prairie in Iowa, Minnesota and North and South Dakota. The study compared land-use changes from 2004 to 2007 with breeding population surveys of dickcissel, grasshopper sparrow, sedge wren, upland sandpiper and western meadowlark. Each of these species relies on grasslands for nesting habitat. And each suffered as corn planting went through the roof.

In areas with high increases in corn, “there were significant, measurable declines in a really short period of time,” says Aviva Glaser, NWF’s agricultural program coordinator and co-author of the report. In just a three-year period, the number of individual birds in intensive corn areas declined by nearly 30 percent.

So how much more corn is being planted in grassland regions? The NWF study considered any increase of 3 percent or more of a county’s land area to be a “high level of increase.” Places like Lyon County, Minnesota, for example, saw corn acreage jump by 15,800 acres, a 3.4 percent increase during the study period. Cass County, North Dakota, led the pack: In 2004, it hosted 150,000 acres of corn. In just three years, that figure increased by 100,000 acres.

This flush of interest in corn could also hurt grassland restoration. Through the federally administered Conservation Reserve Program (CRP), established in 1985, the government has been paying landowners to put marginal lands back into native vegetation, a practice that has successfully provided critical wildlife habitat. But contracts on nearly a third of the 31.4 million acres enrolled in the program are set to expire over the next year, and many will likely be put into corn production. “Corn production is a one-two punch,” says Bruce Stein, NWF’s associate director for wildlife conservation and global warming. “Because of such a rapid increase in corn acreage, we’re losing both unbroken prairie and critical CRP lands.” The result, he explains, is an erosion of both Plan A and Plan B for maintaining the long-term health of grasslands.

But it’s not fair to blame farmers. Many experts consider federal agricultural policies as primary driving forces behind grasslands conversion. Legislation, for example, has mandated increases in corn ethanol production through 2015. In addition, “people are farming these areas due to policies that make it an absolute no-lose proposition to break out areas that have been in native grassland forever,” says Julie Sibbing, NWF’s director for global warming, agriculture and wildlife. For starters, federal crop insurance pays farmers based on production rates from higher-quality lands, so even sub-marginal acreage can turn loss into profit. “Even in those cases when insurance doesn’t cover losses,” explains Sibbing, “disaster payments can kick in. There’s really nothing to make a landowner think twice about plowing up that rocky, back 40 acres of native prairie.” 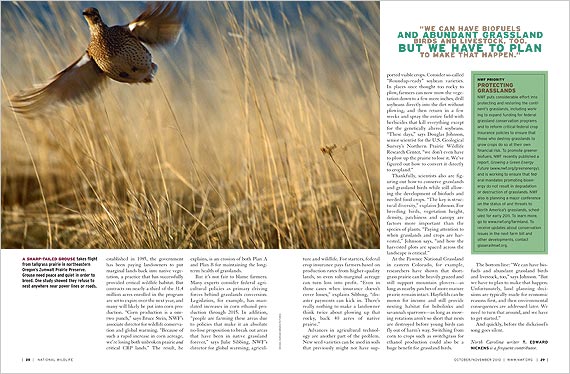 Advances in agricultural technology are another part of the problem. New seed varieties can be used in soils that previously might not have supported viable crops. Consider so-called “Roundup-ready” soybean varieties. In places once thought too rocky to plow, farmers can now mow the vegetation down to a few mere inches, drill soybeans directly into the dirt without plowing, and then return in a few weeks and spray the entire field with herbicides that kill everything except for the genetically altered soybeans. “These days,” says Douglas Johnson, senior scientist for the U.S. Geological Survey’s Northern Prairie Wildlife Research Center, “we don’t even have to plow up the prairie to lose it. We’ve figured out how to convert it directly to cropland.”

Thankfully, scientists also are figuring out how to conserve grasslands and grassland birds while still allowing the development of biofuels and needed food crops. “The key is structural diversity,” explains Johnson. For breeding birds, vegetation height, density, patchiness and canopy are factors more important than the species of plants. “Paying attention to when grasslands and crops are harvested,” Johnson says, “and how the harvested plots are spaced across the landscape is critical.”

At the Pawnee National Grassland in eastern Colorado, for example, researchers have shown that shortgrass prairie can be heavily grazed and still support mountain plovers—as long as nearby patches of more mature prairie remain intact. Hayfields can be mown for income and still provide nesting habitat for bobolinks and savannah sparrows—as long as mowing rotations aren’t so short that nests are destroyed before young birds can fly out of harm’s way. Switching from corn to crops such as switchgrass for ethanol production could also be a huge benefit for grassland birds.

The bottom line: “We can have biofuels and abundant grassland birds and livestock, too,” says Johnson. “But we have to plan to make that happen. Unfortunately, land planning decisions are typically made for economic reasons first, and then environmental consequences are addressed later. We need to turn that around, and we have to get started.”

And quickly, before the dickcissel’s song goes silent.

“Breaking out” native prairie sounds like something from the era of Conestoga wagons, but each year more and more native unplowed prairie is converted to cropland, and each newly plowed acre unleashes a cascade of ills. When plowed, a single acre of native prairie will release half its carbon over the next 50 years, for a total of nearly 60 tons over the time period, according to one study. It’s best to keep carbon locked up in intact prairie soils, but putting carbon back into long-term agricultural lands “has the effect of ‘re-blackening’ the soil,” says NWF scientist Bruce Stein. “That offers tremendous opportunities for carbon sequestration.”

NWF puts considerable effort into protecting and restoring the continent’s grasslands, including working to expand funding for federal grassland conservation programs and to reform critical federal crop insurance policies to ensure that those who destroy grasslands to grow crops do so at their own financial risk. To promote greener biofuels, NWF recently published a report, Growing a Green Energy Future, and is working to ensure that federal mandates promoting bioenergy do not result in degradation or destruction of grasslands. NWF also is planning a major conference on the status of and threats to North America’s grasslands, scheduled for early 2011. To learn more, see Wildlife and the Farm Bill.