North America is home to remarkable wildlife spectacles where thousands and sometimes millions of wild creatures come together at the same time; following are six of our favorites that you can experience firsthand 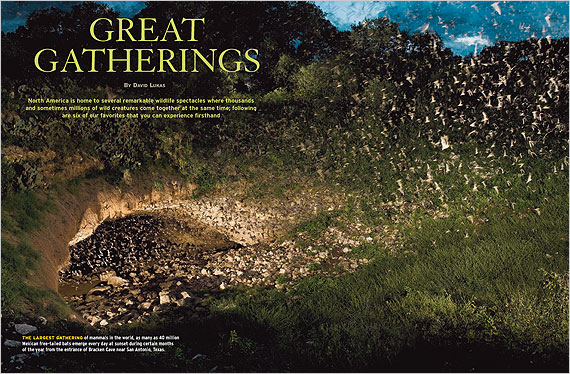 Long feared and misunderstood, bats are gaining new-found admiration at a time when they are increasingly threatened by disease and human disturbance. Even if you don’t go into paroxysms of excitement over their tiny faces and kinetic personalities, you should expect to be awestruck by the creatures at Texas’s Bracken Cave because they form the largest gathering of mammals in the world—an astounding 20 to 40 million bats.

The inside of the cave is off-limits because it is a maternity colony where millions of vulnerable newborn pups cling to the walls, waiting for mothers to return from their nightly feeding flights. But visitors are welcome outside the cave. Each evening at sunset, the bats issue forth in a torrent that rushes out of the cave’s mouth like a windstorm. Susan Kwasniak of Bat Conservation International notes that if visitors to the site cup their hands behind their ears, they hear sounds resembling a loud waterfall.

The bats spend the next eight hours eating their weight in insects, with the entire colony consuming an estimated 200 tons of the creatures each evening. Amazingly, when female bats return to the cave at dawn, they manage to find their own pups amid 20 million youngsters packed together as tightly as 250 per square foot.

Texas is home to at least 10 major bat maternity caves as well as other attractions such as the Congress Bridge in Austin, where a colony of 1.5 million of the flying mammals live. But Bracken Cave may be the foremost bat spectacle in the world.

How to Get There: Located 25 miles northeast of San Antonio, Bracken Cave is privately owned and managed by Bat Conservation International. Visitors must become members before visiting the site, but the membership fee helps support the nonprofit group’s conservation and research efforts. It also allows a member to bring a group of four people to Bracken Cave. Evening viewing opportunities are available from April to September, but according to Susan Kwasniak, the longer daylight periods of July and August are the most exciting times because the bats emerge before darkness and the pups begin making their first flights. 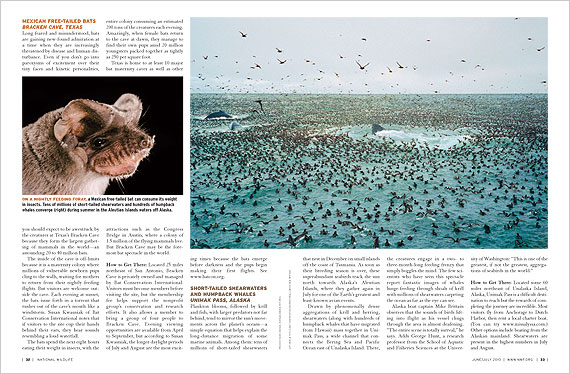 Plankton blooms, followed by krill and fish, with larger predators not far behind, tend to mirror the sun’s movements across the planet’s oceans—a simple equation that helps explain the long-distance migration of some marine animals. Among them: tens of millions of short-tailed shearwaters that nest in December on small islands off the coast of Tasmania. As soon as their breeding season is over, these superabundant seabirds track the sun north towards Alaska’s Aleutian Islands, where they gather again in July for one of the Earth’s greatest and least-known avian events.

Drawn by phenomenally dense aggregations of krill and herring, shearwaters (along with hundreds of humpback whales that have migrated from Hawaii) mass together in Unimak Pass, a wide channel that connects the Bering Sea and Pacific Ocean east of Unalaska Island. There, the creatures engage in a two- to three-month-long feeding frenzy that simply boggles the mind. The few scientists who have seen this spectacle report fantastic images of whales lunge-feeding through shoals of krill with millions of shearwaters carpeting the ocean as far as the eye can see.

Alaska boat captain Mike Brittain observes that the sounds of birds lifting into flight as his vessel chugs through the area is almost deafening. “The entire scene is totally surreal,” he says. Adds George Hunt, a research professor from the School of Aquatic and Fisheries Sciences at the University of Washington: “This is one of the greatest, if not the greatest, aggregations of seabirds in the world.”

How to Get There: Located some 60 miles northeast of Unalaska Island, Alaska, Unimak Pass is a difficult destination to reach but the rewards of completing the journey are incredible. Most visitors fly from Anchorage to Dutch Harbor, then rent a local charter boat. (You can try Miss Alyssa.) Other options include boating from the Alaskan mainland. Shearwaters are present in the highest numbers in July and August.

If snakes make you nervous, approach the Narcisse Snake Dens with caution because the ground may be covered with literally thousands of the reptiles. Awakened from hibernation by the warming spring air, male red-sided garter snakes emerge together from deep subterranean cracks in this region’s bedrock, where they have been sleeping in wriggling masses, hidden safely from Canada’s frosty winter. Once peak numbers of males are on the surface in early May, females emerge one by one over the course of several weeks, triggering “mating balls” in which as many as 100 males at a time furiously weave around any receptive female they find.

Relatively unknown a few decades ago, these incredible gatherings of garter snakes are now a popular event in southern Manitoba. More than 70 hibernacula (hibernation dens) are spread over parts of western Canada, some with 25,000 to 30,000 snakes occupying a den the size of an average living room. These are the largest congregations of snakes in the world, and the most accessible site is the Narcisse Snake Dens, a Manitoba Wildlife Management Area.

Robert Mason, a biologist at Oregon State University who has been studying these snakes since 1982, observes that the Manitoba Department of Conservation has done a spectacular job protecting what must be one of the most intriguing wildlife spectacles in North America. The agency has done everything from building tunnels under nearby highways so snakes are not hit by vehicles to stopping the commercial collecting of newly emerged snakes.

How to Get There: Situated about 80 miles north of Winnipeg, Manitoba, the snake dens are easily accessed at Narcisse, where public-viewing facilities are available. 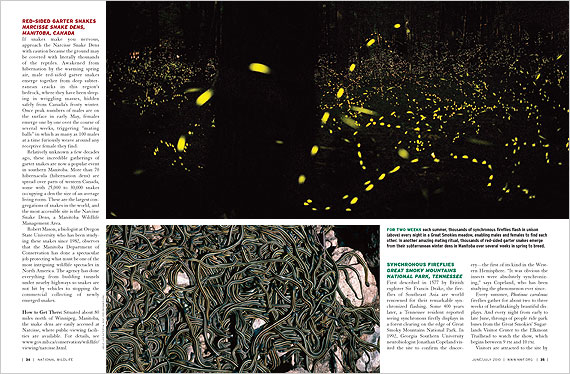 First described in 1577 by British explorer Sir Francis Drake, the fireflies of Southeast Asia are world renowned for their remarkable synchronized flashing. Some 400 years later, a Tennessee resident reported seeing synchronous firefly displays in a forest clearing on the edge of Great Smoky Mountains National Park. In 1992, Georgia Southern University neurobiologist Jonathan Copeland visited the site to confirm the discovery—the first of its kind in the Western Hemisphere. “It was obvious the insects were absolutely synchronizing,” says Copeland, who has been studying the phenomenon ever since.

Every summer, Photinus carolinus fireflies gather for about two to three weeks of breathtakingly beautiful displays. And every night from early to late June, throngs of people ride park buses from the Great Smokies’ Sugarlands Visitor Center to the Elkmont Trailhead to watch the show, which begins between 9 p.m. and 10 p.m.

Visitors are attracted to the site by the incredible displays the insects produce as dozens, then hundreds, then thousands of the lightning bugs begin flashing almost at the same time. The insects flash together for 4 seconds, followed by 10-12-second pauses. Adult fireflies live only for two weeks, reports Copeland, so these brilliant light shows are the only way that males and females find each other.

How to Get There: Located about 6 miles southwest of Gatlinburg, Tennessee, the firefly show has become so popular that visitors must either reserve a campsite at the Elkmont Campground or take a park bus departing from the Sugarlands Visitor Center. Bring everything you need for a few hours of sitting in the meadow. For details, see the Great Smoky Mountains National Park website.

Known as one of the premier locations to see migrating shorebirds in North America—a place the International Shorebird Survey identified as North America’s foremost staging area for northbound shorebirds—Cheyenne Bottoms also is a good place to look for endangered whooping cranes during certain times of year. “In the fall of 2009,” says Robert Penner, avian programs manager for The Nature Conservancy in Kansas, “a large percentage of the entire whooping crane population visited Cheyenne Bottoms over a three-week period.”

This 41,000-acre site is considered to be the largest seasonal wetland in North America. Nearly half of the North American shorebird population, representing as many as 35 species, may stop here during spring migration along with several hundred thousand ducks and geese and other birds. In all, some 335 bird species have been recorded there. For wildlife enthusiasts, the viewing opportunities are incredible from March to May. Visitors to the area also should stop at adjacent Quivira National Wildlife Refuge, where birding opportunities are equally good.

How to Get There: Situated some 90 miles northwest of Wichita, Cheyenne Bottoms is easily accessed from a network of gravel roads managed by the Kansas Department of Wildlife and Parks and the state chapter of The Nature Conservancy. 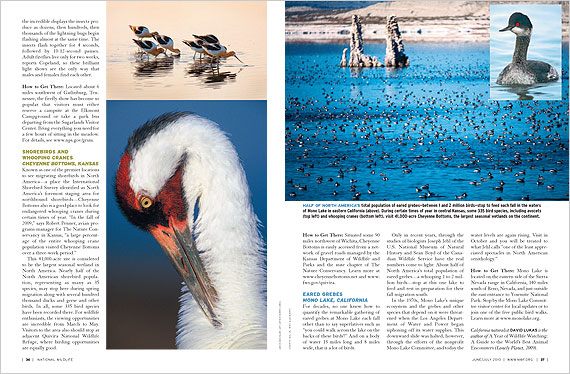 For decades, no one knew how to quantify the remarkable gathering of eared grebes at Mono Lake each fall other than to say superlatives such as “you could walk across the lake on the backs of these birds!” And on a body of water 13 miles long and 8 miles wide, that is a lot of birds. Only in recent years, through the studies of biologists Joseph Jehl of the U.S. National Museum of Natural History and Sean Boyd of the Canadian Wildlife Service have the real numbers come to light: About half of North America’s total population of eared grebes—a whooping 1 to 2 million birds—stop at this one lake to feed and rest in preparation for their fall migration south.

In the 1970s, Mono Lake’s unique ecosystem and the grebes and other species that depend on it were threatened when the Los Angeles Department of Water and Power began siphoning off its water supplies. This downward slide was halted, however, through the efforts of the nonprofit Mono Lake Committee, and today the water levels are again rising. Visit in October and you will be treated to what Jehl calls “one of the least appreciated spectacles in North American ornithology.”

How to Get There: Mono Lake is located on the eastern side of the Sierra Nevada range in California, 140 miles south of Reno, Nevada, and just outside the east entrance to Yosemite National Park. Stop by the Mono Lake Committee visitor center for local updates or to join one of the free public bird walks.

California naturalist David Lukas is the author of A Year of Wildlife Watching: A Guide to the World’s Best Animal Encounters (Lonely Planet, 2009).