With help from computers and other tools, determined researchers are locating new populations of imperiled plants 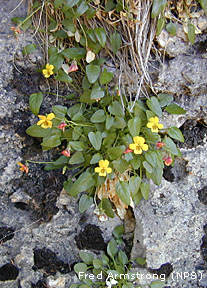 WILD ANIMALS may always be conservation’s poster children, but without plants we would lose the very foundation of our terrestrial ecosystems. “We need to remember that plant diversity provides the long-term resilience for our habitats,” says botanist Bruce Stein, NWF associate director for wildlife conservation and global warming.

Sadly, that diversity is shrinking precipitously. In the United States alone, between 20 and 30 percent of native plant species are now considered at risk of extinction. The bright spot in this grim picture is the fact that new populations of imperiled plants are being located every year. Some represent a payoff for years of conservation work. Others are the result of fortuitous discoveries. And still others are being found with help of computer modeling. “The thing about rare plant species,” explains Stein, “is that they are often hidden in plain sight.” Following are some important recent discoveries:

• Texas beauty: Habitat-sleuthing software proved key to the discovery of two new populations of the Guadalupe Mountains violet (Viola guadalupensis, above), a tiny perennial that grows in the weathered crevices of limestone cliffs. Known to exist only in Texas’s Guadalupe Mountains National Park, the violet was first spotted on a mountain ridge by a park naturalist in 1990, and DNA analysis confirmed it was a newly discovered species.

Subsequent searches turned up no other specimens, and park natural resource manager Fred Armstrong knew that the single colony—around 80 tiny plants growing across a 10- by 15-foot rock face—could quickly vanish.

Armstrong and his staff began collecting seed, while another colleague created a computer model of the original location to help identify new sites where the plant might succeed. In 2006, the park staff discovered that one of those sites already hosted the violet. They found yet another population last summer: more than 100 plants in an area that matched the computer model in most aspects. The team is collecting temperature, humidity and light intensity data at the three sites to help refine its model to find new plant populations.

• Hawaiian natives: The Aloha State’s ‘Oha wai (Clermontia peleana) is a lobelia as exotically beautiful as it is endangered. Its nectar-laden flowers evolved to match the arched beak of its pollinators, Hawaii’s native honeycreepers. But over the last century introduced diseases decimated the birds, while feral animals rooted out the plants’ seedlings. A few ‘Oha wai survived out in a secluded rain forest until the last known wild specimen disappeared in 2000. In 2007, botanists began hunting for survivors in remote forests of the Big Island of Hawaii’s Mauna Kea volcano. There, they spotted the species’ distinctive purple-veined leaves. They later returned to find two mature plants, one of which held fruit spilling with seed. In 2008, the botanists found yet another plant in full blossom. Today, thousands of seedlings are being planted on the high slopes of Hawaii Volcanoes National Park and adjacent lands where some honeycreepers still survive.

Meanwhile, on the island of Moloka’i, botanists recently rediscovered two dozen wild specimens of a rare native mint, Phyllostegia hispida. The plants will aid propagation of the species, which in 2009 became the second species officially listed as endangered by the Obama administration.

• Prairie orchids: Conservationists were elated by the discovery last summer of a new population of eastern prairie-fringed orchid, a threatened species that emits a perfume to attract nocturnal sphinx moths for pollination. Biologist Thomas Nagel of the Missouri Department of Conservation found the plants in an old cemetery in the northern part of the state. Early European settlers sometimes left swaths of prairie next to cemeteries to provide flowers for their graves, he notes, and today some of those sites contain remnant gems of unplowed land.

It was in such a meadow that Nagel spotted the lance-shaped leaves of another rare species, the western prairie orchid. “When I started back to my truck to get my camera, I nearly stepped on another,” he recalls. Over the next five hours, he found 26 more orchids.

The imperiled eastern prairie-fringed orchid had not been seen in Missouri in nearly 60 years. No large populations survive in the United States, and the complexities of the plant’s development continue to defy propagation. Before emerging, the young orchids grow underground for five years, fused with symbiotic soil fungi called mycorrhizae. This summer, Nagel will take other botanists to the cemetery to see the orchids and discuss the next steps to conserve the plants.

• Catalina rebound: Like many isolated habitats, Southern California’s Channel Islands host a diversity of native plants found nowhere else. On the island of Catalina, many of those native plants were threatened with extinction when the Catalina Island Conservancy took over management of most of the landmass in the 1970s.

Since then, the group’s efforts to protect habitat appear to be paying off, judging from the comeback of several native species, including Catalina grass (Dissanthelium californicum), which had been presumed extinct for nearly a century. In 2005, an unusually wet spring produced a surprise reappearance of the succulent grass—the only relative of which grows in the Andes Mountains. Conservancy scientists counted nearly 700 plants in 17 populations scattered across Catalina. A succession of dry springs since has sent the grass back into dormancy but not before the group placed ample seed in long-term storage.

Meanwhile, a wildfire in 2007 sparked a resurgence of another unique Channel Islands species, the threatened island rush rose (Helianthemum greenei). Before the fire, fewer than 30 of the plants survived on Catalina. After the fire, more than 4,000 were counted. The species is relatively short-lived, but the post-fire conditions would have enabled it to seed abundantly if it had not been browsed by introduced mule deer. “The plants have been effectively neutered by the deer,” says conservancy plant ecologist Sarah Ratay. “We still have work to do to protect these gorgeous flowers.”

• Yukon gold: Barely 5 inches tall, Yukon draba (Draba yukonensis) is a delicate flowering mustard thought to be extinct until the summer of 2006, when an amateur botanist found 18 of the plants in a Yukon meadow. Hopes were dashed when scientists returned a few weeks later to find the plants gone, presumably the victims of ground squirrels.

“Our mistake was in thinking they were perennials,” says Bruce Bennett, a biologist with the Yukon’s department of the environment. Unlike most drabas, this rare species turned out to be an annual that disappears after producing seed each spring. Returning in 2007, botanists located 250 plants, followed by 3,000 in 2008. Last spring, the population dropped back to 100, Bennett reports, most likely due to natural year-to-year variation. The plant remains Canada’s most endangered wildflower, known to grow only in this one meadow.

“Thanks to determined scientists, the coming years may bring many more discoveries like these,” says Bruce Stein, “but unless we do more to protect habitat, plant diversity will continue to decline dramatically.”

Writer Jessica Snyder Sachs is based in New Jersey.