Do you like your backyard wildlife to offer a titillating mix of romance, broken homes and violence? Then take a look at these widespread little brown birds. 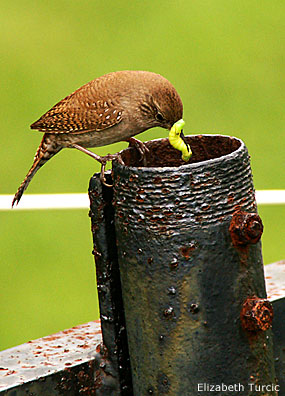 THEY LOOK SO CUTE, those little house wrens—each one less than a handful, with rounded little heads and rotund little bodies, singing melodiously from bush and shrub. No casual observer of backyard life would suspect that these puritanically brown birds flutter at the center of a maelstrom of unfaithfulness, abandoned families and—murder.

The house wren is the most widespread native songbird in the Western Hemisphere, nesting throughout much of Canada and down to the southernmost reaches of South America as well as on the Caribbean islands. It is so common that almost any U.S. resident with backyard trees and shrubs should know this bird. It is slightly smaller than a sparrow, with a plain brown back and a gray throat and chest, sometimes with brownish highlights. Some dark and buff bars appear on tail, wings and sides, but generally you can tell it from any of the eight other North American wren species by what it lacks: any bold or distinguishing marks. Its main distinction is how very plain it is.

Most U.S. and Canadian house wrens migrate to the southern United States or Mexico in winter. They generally return north from late March to early May, with the latest dates characteristic of the northernmost parts of their range. The males wing in first, looking for nesting sites in woody areas—swamps, city parks, farmyards, shrublands and forests of pine or broadleaf trees. They are not particular, as is to be expected from so widespread a species.

Each successful male lays claim to a nesting territory, chasing off competitors. He picks cavities for potential nest sites. Again, he is not particular. Old woodpecker holes are fine, as are nest boxes put out by backyard birders, including those designed for bluebirds. L. Scott Johnson, a biologist at Maryland’s Towson University who has studied the species for almost 25 years, says he has seen the wrens nest in an old boot stuck upside down on a fence and in the brain cavity of a cow skull hanging on a wall.

Once the male has acquired cavities, he lays the foundations of one or more nests. Then he sings to attract a mate, usually perching more than 75 feet above ground and belting out as many as 600 songs an hour. He also may devote some time to inspecting the abodes of other cavity-nesting birds, including house wrens. With an apparently innate distaste for competitors, he may use his sharp beak to pierce any eggs he finds and may take over the nesting sites of other birds. “Male wrens seem to like to maintain as many nesting-site options as they can,” Johnson says. “Curiously, house wrens have also been reported piercing the eggs of open-nesting species. The functions of this remain a mystery.”

The male’s habit of destroying other birds’ eggs has earned it a certain amount of enmity among backyard birders, especially bluebird fans, who sometimes put bluebird houses in open areas to discourage woods-loving house wrens. However, Johnson says, no hard evidence exists to suggest that wrens are causing widespread nest failure in other birds. “We don’t know how common the destruction of eggs and hatchlings of other species is, but it definitely occurs,” Johnson says. “Kind of a strange thing for those of us who love this species. It’s sort of like having a favorite uncle that has a criminal record.”

Females arrive at nesting areas a few days after the males. A female will follow songs to proffered nest sites, inspect them thoroughly and choose one for completion, apparently selecting a mate on the basis of nest-site quality, according to Johnson’s research. After mating, a male will continue singing, but not as often and generally from a spot within 10 feet of the ground. Most of a mated male’s singing seems aimed at the female. For example, she is reluctant to leave the nest to forage until she hears the male singing nearby, as if he is giving her an “all clear.” Mated males also direct a small percentage of their songs at other males in defense of territory.

Once eggs are laid, attacks on rival nests stop as if a switch has been flipped in the wren’s brain. This change in aggression may be a safety mechanism that keeps the birds from inadvertently destroying their own eggs.

Now the male may find distraction not in violence but in the wings of another woman: He may sneak into the territories of other males and try to breed with their mates, flying low to the ground and moving from bush to bush, apparently to avoid being seen by the resident males. Johnson found that at least 40 percent of nests in his Wyoming study area housed one or more young that were not fathered by the male on whose territory they hatched; instead, they were the offspring of a male on a neighboring territory.

Also, while his female is incubating eggs, a resident male may start belting out songs from treetops, as he did when he was a bachelor, trying to attract a second female. About 15 to 20 percent of males in one of Johnson’s Wyoming studies took on second mates.

The male provides little or no support for his second family, Johnson reports, leaving the female to raise her young on her own limited resources. Consequently, her hatchlings generally are not as robust as those of the primary female and may even starve to death. One reason the secondary female cannot forage vigorously is the need to guard her young, which are more likely to be killed by intruding males than are those of the primary mate. If the first female or her brood should die, however, a male may switch to nurturing his second family.

The adultery and internecine warfare wind down as the birds migrate south for winter, but the strains and dangers of migration take a toll: Only about half of house wrens survive the winter, returning north to begin anew the endless cycle of the backyard battleground.

The first wild bird species that Senior Editor Roger Di Silvestro learned to identify, long ago in his preschool years, was the house wren.

No Houses for House Wrens?

Given that house wrens may destroy the eggs and young of other birds, some bird enthusiasts are opposed to providing houses for the species. However, says long-time wren researcher L. Scott Johnson of Maryland’s Towson University, house wrens eat a lot of the insect species that plague vegetable gardens and other plantings, making the birds a boon to almost any backyard. Moreover, house wrens are so successful at nesting in almost any cavity that providing houses probably makes little or no difference to wren populations or to their impact on other species, which likely are adapted to whatever inroads the little brown birds make. So, Johnson says, backyard birders who like the house wren’s melodious call should feel no compunction in providing nesting sites in leafy areas. “Folks who want to attract bluebirds may succeed by putting up a box for wrens well away from their bluebird boxes,” he says.