Struggling to adapt to global warming, wild animals are changing what they eat and how they live 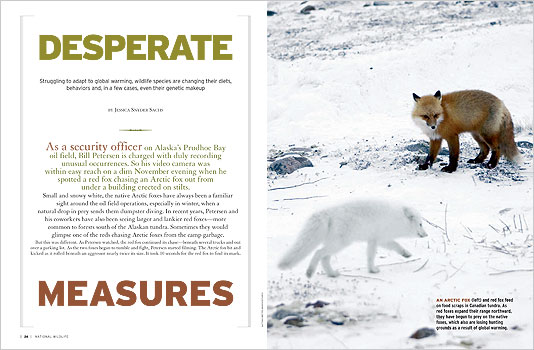 Several years have passed since studies conclusively demonstrated that global warming is altering where and when many animals feed and breed. In 2003, two benchmark reports showed that more than 100 species have shifted their ranges toward the poles at an average of 4 miles a decade and that thousands of others were emerging, migrating or breeding days to weeks earlier than they did a century ago.

The Dangers of Change

Animal species differ in the way they adapt to climate change. As a result, range shifts by animal populations can create problems for animals that remain in their historical ranges. Similarly, changes in seasonal timing can knock animals out of sync with the seasonal appearance of the plants and prey they need to survive.

Now a scattering of reports from around the world suggest these mismatches may be producing a new level of behavioral changes. “The first kinds of behavioral changes were changes in range and timing," says Camille Parmesan, a biologist at the University of Texas, Austin. "Now we’re seeing changes in diets and other behaviors that show some animals are trying to adapt to their new circumstances. Unfortunately, many instances are more an act of desperation than a true adaptation.” 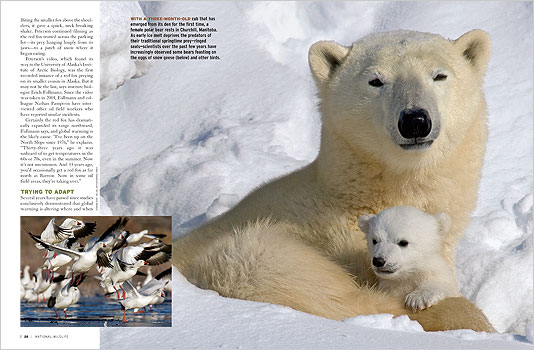 Arctic ice cap melting, which has been increasing for years, spells big trouble for polar bears, because ringed seals give birth on the ice in April and May, providing the bears with most of the food they need to survive the lean summer ahead. “With the ice breakup advancing three weeks over the last 30 years, that means a lot of thin and hungry bears coming onto land each spring,” says Ian Stirling, a veteran polar bear biologist with the Canadian Wildlife Service.

Already, increasing numbers of polar bears are coming into Inuit towns and hunting camps in search of food. At the same time, the first bears to come off the ice each spring are beginning to overlap with the nesting season of Arctic geese and ducks. Some experts believe this may be turning an occasional deviation—a polar bear snacking on eggs—into a regular habit. “We’re definitely seeing an increase in the last five to six years,” says snow goose expert Robert Rockwell of the American Museum of Natural History.

An increase in egg-gobbling polar bears is affecting the colonies of snow geese Rockwell studies at northern Manitoba’s La Perouse Bay. But this change might turn out to be a good thing, he hastens to add. “In 1969, this goose colony had around 2,500 nesting pairs,” he explains. “Now it’s over 50,000.” This population explosion may stem from the increased availability of corn and rice in the goose’s wintering grounds across the northern plains. “Lots of people think it’s cool to see these beautiful funnel clouds of snow geese,” Rockwell says. “Problem is, the Arctic environment is very fragile, and these guys have beaten it to death.”

In any event, veteran polar bear biologists such as Stirling don't think goose eggs will save hungry bears. “An adult polar bear needs to eat around 43 ringed seals or the equivalent to make it through a year,” Stirling points out. “That’s a huge amount of biomass that makes the seasonal intake of goose eggs by a few polar bears look trivial.” 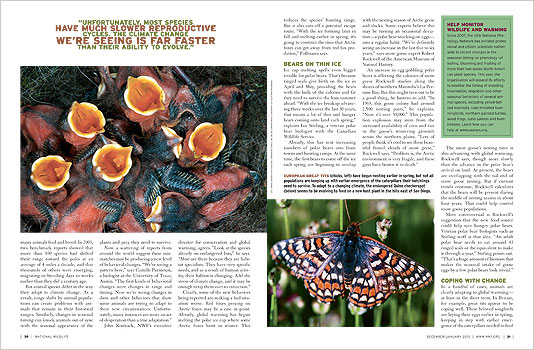 The Fox That Came to Dinner

As a security officer on Alaska’s Prudhoe Bay oil field, Bill Petersen has to record unusual occurrences so his video camera was within easy reach on a dim November evening when he spotted a red fox chasing an Arctic fox out from under a building on stilts. Small and, during winter, snowy white, native Arctic foxes have always been a familiar sight around the oil field operations, especially in winter, when a natural drop in prey sends them dumpster diving. In recent years, however, Petersen and his coworkers also have been seeing larger and lankier red foxes—more common to forests south of the Alaskan tundra. Sometimes they would glimpse one of the reds chasing Arctic foxes from the camp garbage.
But this was different. The red fox continued its chase beneath several trucks and across a parking lot. As the two animals began to tumble and fight, Petersen filmed. The Arctic fox bit and kicked as it rolled beneath an aggressor nearly twice its size. Within seconds the red fox found its mark, biting the smaller fox above the shoulders and giving it a quick, neck-breaking shake. Petersen filmed the red fox trotting across the parking lot—its prey hanging limply from its jaws—to a patch of snow where it began eating. Petersen’s video, which found its way to the University of Alaska’s Institute of Arctic Biology, was the first recorded instance of a red fox preying on its smaller cousin in Alaska. But it may not be the last, says institute biologist Erich Follmann. Since the video was taken in 2004, Follmann and colleague Nathan Pamperin have interviewed other oil field workers who have reported similar incidents.
Certainly the red fox has dramatically expanded its range northward, Follmann says, and global warming is the likely cause. “I’ve been up on the North Slope since 1976,” he explains. “Thirty-three years ago it was unheard of to get temperatures in the 60s or 70s, even in the summer. Now it’s not uncommon. And 33 years ago, you’d occasionally get a red fox as far north as Barrow. Now in some oil field areas, they’re taking over.” Already, global warming has begun melting the polar ice cap where some Arctic foxes hunt in winter. This reduces the species’ hunting range. But it also cuts off a potential escape route. “With the ice forming later in fall and melting earlier in spring, it’s going to constrict the time that Arctic foxes can get away from red fox predation,” Follmann says.

Many survival instincts are hardwired into an animal’s genes. Changes in day length, for example, trigger migration, mating or hibernation in many species. Many insects and other invertebrates also are programmed to respond to set images of what to eat or where to lay eggs. “A change in these responses requires wholesale changes in genetic makeup,” Parmesan explains. For example, Parmesan discovered in the 1990s that a West Coast butterfly called Edith’s checkerspot had shifted its range north, one of the first examples of a clear relationship between behavior and global warming. 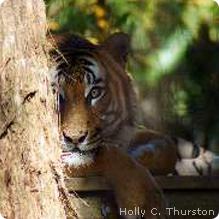 In South Asia, a global warming-related rise in sea level is gradually flooding coastal mangrove forests in the Sundarbans of Bangladesh and India—habitat for one of the world’s largest surviving tiger populations in a unique ecosystem. That, in turn, may be partly responsible for a recent increase in tiger attacks in surrounding villages. “It is very rare that a tiger walks through human habitation unless it has no other option,” says Mahendra Shrestha, director of the National Fish and Wildlife Foundation’s Save the Tiger Fund. “Now we’re frequently seeing tigers straying from their habitat.” As an example, Shrestha describes a tigress that recently wandered 125 miles or more from the nearest tiger habitat. Walking through Indian towns and villages, she killed four people before being shot.

The delicate orange, black and white-checkered butterfly is sensitive to temperature because host plants such as plantains dry out in hot weather. With the plants drying earlier and earlier each year, fewer of the butterfly’s caterpillars were surviving to adulthood. In 1996, Parmesan reported that three-fourths of the butterfly’s southern populations had disappeared. Worst hit was an endangered subspecies, the Quino checkerspot of Southern California and Mexico. Looking at a map, she predicted that the Quino “was a goner. It couldn’t go north. There was nothing but desert.”

Seven years later, Parmesan began hearing reports of new Quino populations in the San Jacinto foothills east of San Diego—outside of the butterfly’s known historic range. “Instead of going north,” she marvels, “it may be heading up.” A species retreating to higher elevations to escape global warming wasn’t new. But the new upland populations were also laying eggs on a plant—Chinese houses—the Quino had never before been seen using.

A Butterfly Signals a Genetic Revolution

The adaptability of a the checkerspot may be a sign of "genetic revolution,” Parmesan says, because a butterfly shifting to a new host plant has to change more than the genes governing its search image and its instinct to lay eggs on a particular plant. Other necessary genetic changes may include the number of eggs being laid—something that must match the plant’s ability to shelter them and nourish the emerging caterpillars. Sometimes, caterpillars even need to produce new enzymes to detoxify a different plant’s natural pesticides. 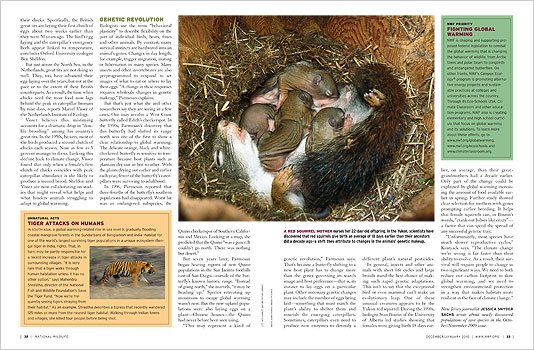 Which Species Are Most Likley to Survive Global Warming?

In general, insects and other animals with short life cycles and large broods stand the best chance of making the rapid genetic adaptations that global warming demands. However, some exceptional birds or even mammals may make an evolutionary leap. One of these unusual creatures appears to be the Yukon red squirrel. During the 1990s, biologist Stan Boutin of the University of Alberta led studies showing that females were giving birth 18 days earlier, on average, than their great-grandmothers had a decade earlier. Only part of the change could be explained by global warming increasing the amount of food available earlier in spring. Further study showed clear selection for mothers with genes prompting earlier breeding. It helps that female squirrels can, in Boutin’s words, “crank out babies like crazy”—a factor that can speed the spread of any successful genetic trait. Birds have their own ways for adapting to global warming.

Not All Species Can Adapt

Unfortunately, most species have much slower reproductive cycles,” Kostyack says. “The climate change we’re seeing is far faster than their ability to evolve. As a result, their survival will require people to change in two significant ways. We need to both reduce our carbon footprint to slow global warming, and we need to strengthen environmental protection in a way that makes habitats more resilient in the face of climate change.”