The Hummingbirds of Winter

Across the Southeast, volunteer banders and backyard birders team up to study apparent shifts in the cold-weather ranges of several hummingbird species 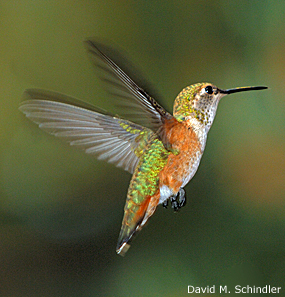 WHEN ANNABETH and Donald Proctor first started feeding hummingbirds near Charleston, South Carolina, more than two decades ago, they would take their sugar-water feeders down each September. Like their neighbors, they assumed the ruby-throated hummingbirds that summered in their magnolia and live oak-filled yard were about to head south to the Tropics. But a funny thing happened about ten years ago: “I started hearing hummingbirds during the winter,” says Annabeth. “Eventually I realized there were some here all year.” Soon she began to leave one feeder up during the autumn, then another and another. Today she hangs a dozen or more feeders during the coldest months, and it is not unusual for the Proctors to have as many hummingbirds in December as they do in June.

Similar reports have come from backyards across the Southeast, piquing the curiosity of scientists and casual birders alike. Do these wintering hummingbirds represent a new phenomenon or have they been here all along? Are the same birds staying in the Southeast year-round or do breeding ruby-throated hummingbirds leave for Mexico and Central America, replaced by others from farther north? How do the birds survive below-freezing temperatures?

To try and find answers to these and other questions, I began banding hummingbirds several years ago at the Proctors’ home and elsewhere along the Carolina and Georgia coasts, part of an informal coalition of about 30 federal- and state-licensed bird banders in the region. Some, like me, are studying wintering ruby-throated hummingbirds.

Others are documenting western hummingbirds that sometimes forsake Mexico—where bird guides tell us they are supposed to go—and migrate instead to the southeastern United Sates. Hundreds of “hummer hosts,” people like the Proctors who maintain feeders during fall and winter, are a critical part of this effort.

Hummingbird Diversity on the Gulf Coast

“Without hummer hosts, my research wouldn’t be possible,” says Fred Bassett, a bander who has been investigating western hummingbirds for more than a decade and now heads the Montgomery, Alabama-based nonprofit Hummingbird Research, Inc. So far, Bassett has banded nearly 2,000 hummingbirds of 10 species in backyards during the winter, from Alabama’s Mobile Bay across the Florida panhandle to Tallahassee and down to Tampa. Almost half the birds—which he catches by hanging a feeder inside a wire cage with a sliding trapdoor—have been rufous hummingbirds, which nest in the Pacific Northwest and Alaska and are supposed to head to Mexico during the nonbreeding season. The others have been wintering ruby-throated, black-chinned, calliope, buff-bellied, Allen’s, Anna’s, Costa’s, broad-billed and broad-tailed hummingbirds.

Besides uncovering such amazing hummer diversity along the Gulf Coast, Bassett has discovered that the birds are surprisingly faithful to their winter territories. “I’ve recaptured black-chinned, rufous and buff-bellied returning to the same home for seven consecutive years,” he says.

Bob and Martha Sargent, who run the nonprofit Hummer/Bird Study Group out of Clay, Alabama, began searching for Southeast-wintering hummingbirds back in the 1980s. At first, “I wasn’t certain they could survive our winters,” says Bob. “By banding them, we’ve shown they do.”

In addition to using feeders, the birds glean dormant insects from leaves and bark, he says. “When temperatures rise, they hawk tiny insects out of the air. They also feed at sapsucker wells,” eating both the sap and trapped insects. To conserve energy, hummingbirds often go into torpor at night, slowing down their heart and lungs to a fraction of daytime rates. “These birds are very cold hardy,” says Bob.

Some species even begin to nest before winter is over. On the opposite side of the country, Anna’s hummingbirds have moved up the Pacific coast during the last 50 years and can now be found year-round as far north as Vancouver, British Columbia. Females are often sitting on eggs as early as February.

By banding, my colleagues and I have learned that buff-bellied hummingbirds—glittering green and turquoise birds that breed in south Texas and Mexico—sometimes migrate north rather than south in fall. With the help of hummer hosts, we’ve also discovered they head east, spending the winter from Baton Rouge, Louisiana, to Gainesville, Florida. Last January, on Georgia’s St. Simon’s Island, I banded a female buff-bellied hummingbird on a frosty morning at Martha and Rich Armstrong’s home. At first light, it was so cold the water in the Armstrong’s birdbath was frozen solid. But as the day warmed, this tropical hummer abandoned the feeder and began flying out from her perch high in an oak tree to catch swarming gnats.

While we now know hummingbirds like the buff-bellied can survive frigid weather, there are still “more questions than answers about wintering hummers,” says Bassett. One mystery that will probably never be solved is how long they have been wintering in the Southeast. Both Bassett and the Sargents believe the birds have always migrated to the region. The first rufous hummingbird found east of the Mississippi was collected in 1904 by the Charleston Museum, but in the intervening century, any hummer spotted after the autumn migration ended was dismissed as a lost, doomed bird and ignored by the scientific community.

Another unanswered question is whether the Southeast’s population of wintering hummers is on the upswing. “The only thing the data tell us is that ruby-throated and buff-bellied numbers seem to be steadily increasing,” says Bassett. “For the other species, the numbers go up and down.”

Also unknown is the impact of global warming. After years of warm weather, researchers thought a “correction” might occur if and when a severe winter settled over the region. But last year, with some of the lowest temperatures seen in the Southeast in more than a decade, Bassett and two colleagues banded well over 200 hummingbirds in four states. The birds’ weights, which are often a good indication of their health, were slightly higher than in previous winters. “Some of them had even put on a little fat,” says Bassett. “They were doing just fine.”

When not banding hummingbirds, Doreen Cubie  is a freelance journalist based in South Carolina.

NWF’s Certified Wildlife Habitat™ program provides homeowners with the information they need to create inviting outdoor spaces for a wide range of species, including hummingbirds.

When Fred Dietrich banded a female rufous hummingbird last January at the Tallahassee, Florida, home of Pam Flynn, it was the 15th wintering hummer documented in her yard since 2005. But this hummingbird turned out to be even more special when, only five months later, Kate McLaughlin, a bander along Alaska’s Prince William Sound, dropped the door of a cage trap and caught the exact same bird more than 3,500 miles to the northwest. It’s the longest distance between banding and recapture ever recorded for any hummingbird species.

If you leave a sugar-water feeder out during the fall and winter months and spot a hummingbird after November 1, the Hummer/Bird Study Group would like to know about it. You can reach the organization at rubythroat@aol.com. “There’s no truth to the myth that keeping a feeder up after Labor Day will stop hummingbirds from migrating,” says Bob Sargent, who runs the group.

Find out how backyard birders are making a difference: "Magazine Readers Report Hummingbird Sightings"
"Creating a Haven for Hummingbirds": Use feeders and flowers to attract these avian pollinators to your garden
"Tiny Trailblazers": As more western hummingbirds are spotted in the East each winter, some scientists suggest that new migratory routes are evolving
Photo of the Week: Rufous Hummingbird
Support NWF's conservation efforts: Adopt a Ruby-Throated Hummingbird