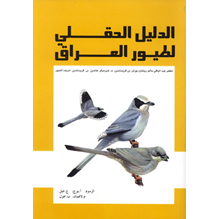 Despite decades of war, Iraq still harbors a rich diversity of birds and other wildlife—and U.S. soldiers are trying to help Iraqis protect this rich natural heritage.

During 2004, while with the 118th Medical Support Battalion, avid birder Jonathan Trouern-Trend logged 122 bird species in a year in the country. They included olivaceous warblers, blue-cheeked bee-eaters, hoopoes and white-cheeked bulbos.


Birding gave the Connecticut native optimism. “Even when there’s really terrible things going on,” he says, “there’s something that can give hope that [war] is not the sum of reality.” Trouern-Trend started a blog that became the book Birding Babylon.

Now Trouern-Trend is back in Iraq with the Connecticut National Guard, rejoining an informal network of soldiers helping scientists safeguard the country’s wildlife. Azzam Alwash—head of Nature Iraq, a private organization that seeks to restore Iraq’s environment—says: “We do not have access to all of Iraq. Birding warriors like Jonathan have been helping fill a gap in our knowledge.”

The soldiers’ sightings help scientists track the distribution of species, important because birds are at the forefront of Nature Iraq’s efforts to identify and protect critical ecosystems. “Birds are one of the most sensitive indicators of a healthy environment,” Alwash says.

Nature Iraq is having some success. It persuaded the Iraqi government to sign an international wetlands treaty to protect the Huwaizeh Marshes on the Iraq-Iran border near the confluence of the Tigris and Euphrates rivers. They once covered more than 9,000 square miles, an area almost twice the size of the original Florida Everglades and nearly four times the size of Everglades National Park.

These wetlands are among Europe and Asia’s most important migratory-bird wintering areas. They support the world’s only population of Basra reed warblers and are the “center of gravity” for the Iraq babbler, the grey hypocollus and the Iraq subspecies of the hooded crow and little grebe. Globally threatened birds such as the pygmy cormorant, Eurasian bittern and red-breasted goose also find refuge there.

Saddam Hussein started draining, burning and poisoning the wetlands following an uprising in southern Iraq after the first Gulf War. More than 90 percent of the marshes were reduced to a parched expanse. “Millions of birds changed their migration routes,” says Mudhafar Salim, head of Nature Iraq’s bird division. “Some birds were pushed to the brink of extinction or vanished.”

Alwash and his wife, Suzanne, started Eden Again in 1999 to bring attention to the catastrophe. Their effort gave rise to Nature Iraq, which now employs nearly 50 scientists. They have been helped with donations of spotting scopes, binoculars and camera gear from U.S. soldiers.

Marsh residents started breaking dikes and returning water to wetlands after Saddam’s government fell in 2003. Five years later, nearly 70 percent of the marshes were flooded. Almost all of the bird species returned, albeit in fewer numbers. Today, however, droughts, as well as dams in Iraq, Turkey and Syria, threaten to turn the marshes again into a wasteland.

But Alwash is optimistic: “The marshes survived seven years of being 90 percent dry. They can survive two years of drought.” In addition, Iraq’s environment minister backs protecting the marshes as the country’s first national park.

To build support for its efforts, Nature Iraq published the Field Guide to the Birds of Iraq two years ago in conjunction with BirdLife International, a global consortium for bird protection. The group also produced a children’s book about Iraq’s birds and plans to take its program into classrooms in 2010. “You want to work on the next generation,” Alwash says.

Adapted from “Birding in a Wore-Torn Nation” by Ken Olson, National Wildlife , December/January 2010.