Journey to a Papuan Paradise

A veteran photojournalist treks to a new protected area, a haven for birds of paradise and tree kangaroos found nowhere else on Earth 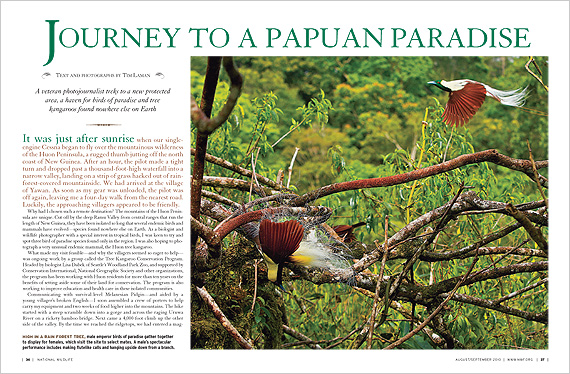 IT WAS JUST AFTER sunrise when our single-engine Cessna began to fly over the mountainous wilderness of the Huon Peninsula, a rugged thumb jutting off the north coast of New Guinea. After an hour, the pilot made a tight turn and dropped past a thousand-foot-high waterfall into a narrow valley, landing on a strip of grass hacked out of rain-forest-covered mountainside. We had arrived at the village of Yawan. As soon as my gear was unloaded, the pilot was off again, leaving me a four-day walk from the nearest road. Luckily, the approaching villagers appeared to be friendly.

Why had I chosen such a remote destination? The mountains of the Huon Peninsula are unique. Cut off by the deep Ramu Valley from central ranges that run the length of New Guinea, they have been isolated so long that several endemic birds and mammals have evolved—species found nowhere else on Earth. As a biologist and wildlife photographer with a special interest in tropical birds, I was keen to try and spot three bird of paradise species found only in the region. I was also hoping to photograph a very unusual endemic mammal, the Huon tree kangaroo.

What made my visit feasible—and why the villagers seemed so eager to help—was ongoing work by a group called the Tree Kangaroo Conservation Program. Headed by biologist Lisa Dabek of Seattle’s Woodland Park Zoo, and supported by Conservation International, National Geographic Society and other organizations, the program has been working with Huon residents for more than ten years on the benefits of setting aside some of their land for conservation. The program is also working to improve education and health care in these isolated communities.

Communicating with survival-level Melanesian Pidgin—and aided by a young villager’s broken English—I soon assembled a crew of porters to help carry my equipment and two weeks of food higher into the mountains. The hike started with a steep scramble down into a gorge and across the raging Uruwa River on a rickety bamboo bridge. Next came a 4,000-foot climb up the other side of the valley. By the time we reached the ridgetops, we had entered a magnificent cloud forest where every surface seemed to be dripping with moss. From there, we dropped down into a smaller river valley and back up before reaching a campsite at about 8,500 feet. There I met Brett Benz, an ornithologist from the University of Kansas who studies bowerbirds. He had arrived a week before and was camped with local field assistants. 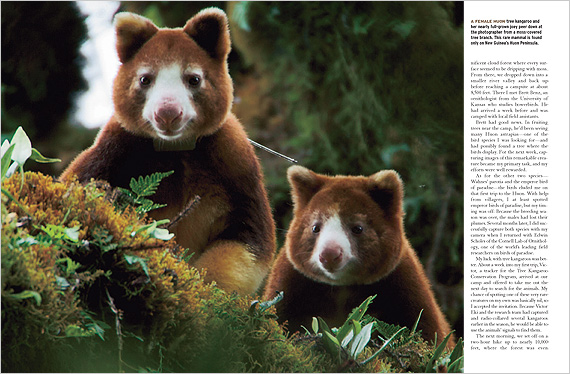 Brett had good news. In fruiting trees near the camp, he’d been seeing many Huon astrapias—one of the bird species I was looking for—and had possibly found a tree where the birds display. For the next week, capturing images of this remarkable creature became my primary task, and my efforts were well rewarded.

As for the other two species—Wahnes’ parotia and the emperor bird of paradise—the birds eluded me on that first trip to the Huon. With help from villagers, I at least spotted emperor birds of paradise, but my timing was off: Because the breeding season was over, the males had lost their plumes. Several months later, I did successfully capture both species with my camera when I returned with Edwin Scholes of the Cornell Lab of Ornithology, one of the world’s leading field researchers on birds of paradise.

My luck with tree kangaroos was better. About a week into my first trip, Victor, a tracker for the Tree Kangaroo Conservation Program, arrived at our camp and offered to take me out the next day to search for the animals. My chance of spotting one of these very rare creatures on my own was basically nil, so I accepted the invitation. Because Victor Eki and the research team had captured and radio-collared several kangaroos earlier in the season, he would be able to use the animals’ signals to find them.

The next morning, we set off on a two-hour hike up to nearly 10,000 feet, where the forest was even mossier than around our camp. Around 11:00 a.m., Victor picked up a signal, and we gradually homed in on what turned out to be a female accompanied by a nearly full-grown joey. Eventually, we spotted the animals high in a tree, peering down at us from the tops of branches covered by moss and other epiphytes. Like two curious teddy bears, they stared at us for several minutes, then crawled over one another, nuzzled and climbed higher into the tree, where they settled down for a nap. Not much action, but enough to get a few good shots of these extraordinary mammals. 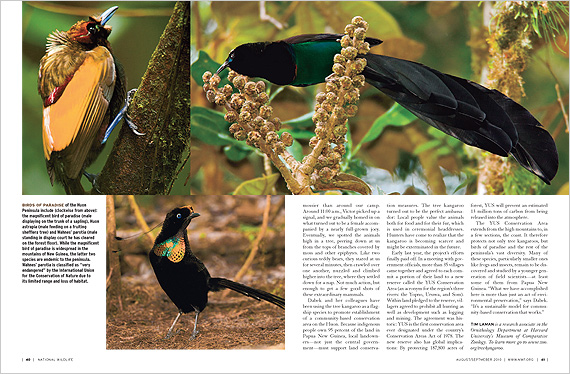 Dabek and her colleagues have been using the tree kangaroo as a flagship species to promote establishment of a community-based conservation area on the Huon. Because indigenous people own 95 percent of the land in Papua New Guinea, local landowners—not just the central government—must support land conservation measures. The tree kangaroo turned out to be the perfect ambassador: Local people value the animals both for food and for their fur, which is used in ceremonial headdresses. Hunters have come to realize that the kangaroo is becoming scarcer and might be exterminated in the future.

Early last year, the project’s efforts finally paid off. In a meeting with government officials, more than 35 villages came together and agreed to each commit a portion of their land to a new reserve called the YUS Conservation Area (an acronym for the region’s three rivers: the Yopno, Uruwa, and Som). Within land pledged to the reserve, villagers agreed to prohibit all hunting as well as development such as logging and mining. The agreement was historic: YUS is the first conservation area ever designated under the country’s Conservation Areas Act of 1978. The new reserve also has global implications: By protecting 187,800 acres of forest, YUS will prevent an estimated 13 million tons of carbon from being released into the atmosphere.

The YUS Conservation Area extends from the high mountains to, in a few sections, the coast. It therefore protects not only tree kangaroos, but birds of paradise and the rest of the peninsula’s vast diversity. Many of these species, particularly smaller ones like frogs and insects, remain to be discovered and studied by a younger generation of field scientists—at least some of them from Papua New Guinea. “What we have accomplished here is more than just an act of environmental preservation,” says Dabek. “It’s a sustainable model for community-based conservation that works.”

Tim Laman is a research associate in the Ornithology Department at Harvard University’s Museum of Comparative Zoology. Learn more about the Tree Kangaroo Conservation Program.

Lost and Found: In a remote, uncharted mountain range on the island of New Guinea, intrepid biologists discover a duo of "missing" bird species as well as a host of new plants and animals
High on Hornbills: In a decades-long quest to shoot pictures of some of the world's rarest and most spectacular birds, photographer Tim Laman learns about patience—and the power of individuals to make a difference