Sex and the Dark-eyed Junco 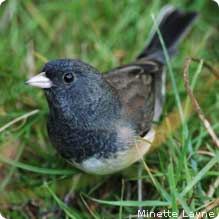 If you put out birdseed this time of year, you’re probably familiar with the dark-eyed junco. According to the Cornell Lab of Ornithology, this widespread, sparrow-sized animal is the most common backyard feeder bird in much of North America.

But when it comes to its social and breeding behavior, the bird is anything but ordinary.


Over the years, researchers have found that during winter the birds form rigid hierarchies led by dominant males and their seemingly closest adult male buddies. Younger males and females often are pushed to the periphery. Now a newer study reveals that another set of dynamics guides the birds when they pair up on their breeding grounds in early spring.


But there’s a catch: The scientists also discovered that these these testosterone-pumped studs are not particularly good fathers, and their offspring are born smaller and die at higher rates. The hormonally charged birds are so eager to show off and chase after new partners that they don’t visit or bring food to their nests as often as their less popular rivals.


In an earlier study, Ketterson found that the über-juncos tend to die at a younger age. Not only does elevated testosterone make them less wary of predators, it also increases their stress levels and promotes production of corticosterone, a hormone that mobilizes quick-release energy but also breaks down protein and leads to the atrophy of muscles, feathers and organs.


How to entice juncos to your yard

During winter, dark-eyed juncos are gregarious ground foragers that readily mingle with other birds in search of food. To attract them:

Place food on the ground or in a platform or hopper feeder.

The birds’ favored fare includes hulled sunflowers, millet and finely cracked corn. Because their bills are relatively small, juncos are not able to handle larger seeds or sunflower seeds in the shell.


Adapted from "The High Price of Being a Hunk" by David Lukas, National Wildlife, February/March 2009.