Spring Migration: It's All About Timing

From January to June, each migratory species has its own special time to return to summer breeding grounds 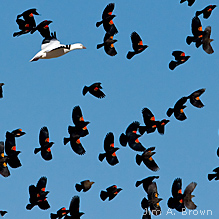 Somewhere in North America, there is probably some kind of migratory movement of birds every day. But spring migration—the mass movement of birds toward their breeding grounds—happens with predictable timing each year. The precise local timing varies, of course, with latitude and elevation. “Early spring” might mean early February in the southernmost states, late March or early April in the north, or even May in the far north and high mountains.

Among the first groups of birds to move north are waterfowl: ducks, geese, and swans may begin migrating as soon as frozen lakes and marshes start to thaw. Even in the northern states, flocks of waterfowl may arrive in late February. Also on the move this early are some species that migrate mostly within North America, spending the winter as far north as they can. They include killdeer and red-winged blackbirds.

Other surprisingly early migrants include purple martins, returning from South America and reaching Florida and Texas by late January and making it to northern states by the end of March.

Many native sparrows tend to be early migrants, with large numbers moving in southern states in March and in northern states by early April. Kinglets and sapsuckers are in this moderately early wave as well. And most blackbirds move north during the first half of the spring.

Shorebirds (sandpipers, plovers and their relatives) have a protracted migration, with some species represented among the earliest and latest migrants. Pectoral sandpipers and American golden-plovers, wintering in South America, come back to southern states by the end of February and reach northern states by March. Many other species migrate later, with peak passage in most areas during April and May. Long-distance migrants that winter in southern South America, white-rumped sandpipers peak in the central United States in late May or early June.

The great northward flood of songbirds that have wintered in the Tropics—including warblers, tanagers, buntings, grosbeaks, orioles, vireos and thrushes—occurs primarily during April and May, filling North American woodlands with color, song and activity. For many birders, warblers are particular favorites; there are several places in the country where you can see more than 30 species of these tiny, colorful gems during the course of the season.

By early June, aside from a few shorebirds and straggling songbirds, spring migration is over across most of North America. This is when birders turn their attention to local nesting species—and get ready to watch for the first of the fall migrants, which in some areas start showing up by early July.

Ohio-based expert birder Kenn Kaufman is the author of Lives of North American Birds and the Kaufman Field Guide Series.

Learn more about bird migration and why many migratory species are in trouble.
Find out the top 10 things you can do to help migratory birds.
Learn the author's favorite place to go birding during spring migration.
Follow spring migration in your region with interactive maps from eNature.