Each spring, thousands of species begin an annual return to their breeding grounds. Here are some of the more extraordinary examples. 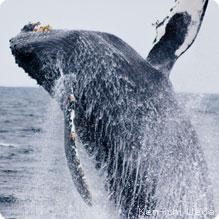 Across the globe, millions of animals--from whales to tiny salamanders--are on the move, heading to their breeding grounds. Here are some facts about some of the more amazing migrations in the animal world.

Thanks to tracking devices, biologists have tallied some astounding migrations, those seasonal movements that animals make to find better food, or nesting places, or mates:

Humpback whales shuttle more than 5,000 miles between breeding grounds off Central America and feeding grounds off Antarctica, the longest known migration by any mammal.
An endangered leatherback turtle swam 12,740 miles across the Pacific, the current record for sea vertebrates.
Seabirds called sooty shearwaters astonished scientists by flying more than 40,000 miles in a loop from New Zealand to Chile, Japan, Alaska and California before a trans-Pacific trip back to New Zealand; the birds averaged more than 200 miles per day for 200 days, but, that distance pales compared to...
The 6,340 miles that one bar-tailed godwit flew nonstop between New Zealand and North Korea, where it rested briefly before continuing to its breeding grounds in Alaska.
The awards for shortest migration may go to salamanders, which often crawl just a few hundred yards between winter burrows and breeding ponds.
Migration: Challenges and Solutions

Migratory species nearly everywhere are under pressure from loss of habitat; deforestation, farming, overfishing and just plain expansion of human populations are wiping out areas critical to migratory species. Dams block salmon migration up and down streams where they hatch and lay eggs, ships ram into whales, birds fly fatally into skyscrapers, and fences keep animals such as deer, pronghorn and bighorn sheep from reaching special feeding grounds. Across the United States, the web of roads connecting city to suburb to exurb grows ever more dense, as does traffic, increasing the number of dangerous barriers that migratory animals encounter. 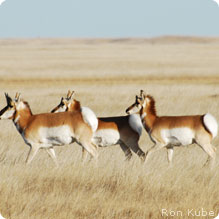 Most animal migration routes in the western United States already have disappeared. In the area that includes and surrounds Yellowstone National Park, for example, one pronghorn population has lost all but a single pathway between its summer and winter habitats. For more than 6,000 years, the animals have been making this seasonal journey between what is now Wyoming's Upper Green River Basin and Grand Teton National Park. Though some 400 pronghorn still make the 300-mile round-trip, they must cross a gauntlet of highways, housing developments, drill pads and more than 100 fences. If more obstacles pop up along this last passage, especially at several bottlenecks along the route, scientists say that the longest migration of any land mammal in the lower 48 states will come to an end.

For several years, conservationists have been campaigning to turn this pronghorn passageway into the world's first protected migration corridor. Ninety percent of the route is already on federal land. The idea is finally getting some traction. Earlier this year three federal agencies--the U.S. Fish and Wildlife Service, National Forest Service and National Park Service--signed a letter of general support, and in June the Forest Service pledged to protect pronghorn on the 45 miles of the corridor it manages. Meanwhile, the Western Governors' Association has passed a resolution to protect wildlife corridors. "It's promising, and better than I would have thought possible five years ago," says Joel Berger, a biologist for the Wildlife Conservation Society and University of Montana who has been involved in the corridor campaign.

A Solution for Deer?

John Bissonette, an ecologist for the U. S. Geological Survey and a professor at Utah State University, studies migration-route obstacles such as highways and methods for mitigating them. "We're not about to see a reduction in cars or speed," he says, "so instead we deal with animal behavior." In southern Utah, for example, traffic on two interstates was killing large numbers of migrating mule deer. In a pilot project funded by the U.S. Bureau of Land Management, Utah Department of Transportation and Utah Division of Wildlife Resources, Bissonette and student Silvia Rosa looked at the impact of installing underpasses and innovative right-of-way escape ramps along 25 miles of highway. Deer-vehicle collisions dropped by 95 percent. "We've essentially restored the migratory routes that come from the mountains in the east and cross the interstate to the west," he says.

Migrations also are being challenged by climate change. Researchers are reporting new behaviors among migratory animals worldwide that may stem from higher temperatures--shifts in breeding ranges, mistiming of cues and departures--with consequences that roll through the migratory cycle. "Since the wintering habitats are changing at different rates than more northerly habitats, things get really out of sync," says Peter Marra, a research scientist at the Smithsonian Migratory Bird Center at the National Zoo in Washington, D.C.

Can migratory animals adapt? No one knows. Over the centuries, at least a few species have started, stopped and restarted migrating, and some birds have recently shown flexibility by changing routes or timing or breeding sites in response to new environmental conditions. In the Midwest, for instance, ducks are arriving later in the fall and resting longer before continuing south, perhaps in response to higher temperatures. "But I think it would be dangerous to assume that all species can adapt," says Princeton University ecologist David Wilcove, "or that they can respond to the full array of threats we are imposing on them."

This article was adapted from "Perilous Journeys" by Steve Kemper, National Wildlife, October/November 2008.