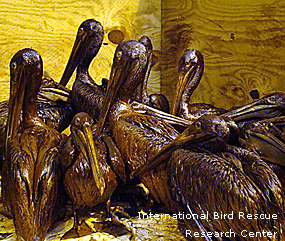 Five months after the Deepwater Horizon rig exploded in the Gulf of Mexico, fewer gut-wrenching images of seabirds smothered in oil are appearing in news media as the number of avian victims declines (brown pelicans, left, at a facility run by the International Bird Rescue Research Center).

As of September 29, the U.S. Fish and Wildlife Service had tallied 8,180 birds killed or injured by the spill, 2,076 collected alive and transferred to wildlife rehabilitators and 6,104 collected dead.

On September 21, the service released a preliminary species-by-species breakdown of birds affected by the spill. So far, species hardest hit have been ocean-feeding birds such as gulls, terns, gannets and brown pelicans—Louisiana’s state bird—which were removed from the federal endangered species list just last year.

But with tens of millions of gallons of oil still present in the gulf, the number of dead and injured birds may continue rising. So, too, may the number of species affected, as millions of fall migrants begin to move into the region.

As distressing as the official tally of victims may be, the true toll of the spill is undoubtedly far worse: The majority of oiled birds perish unseen in remote, inaccessible wetlands or far out at sea.  Scientists estimate that in the 1989 Exxon Valdez spill, rescuers located only about one of every ten birds affected by oil.

Add in inevitable pollution of marine and terrestrial food chains, along with destruction of wildlife habitat, and it’s clear that damage to the region’s birdlife will persist for years, perhaps even decades, to come. Below are just a handful of the species currently or soon to be in harm’s way.